"For the founders and their successors, it is like building a miraculous community every year. They come to one of the most gorgeous settings in the world, bring in the power, water and the amenities, then the musicians arrive and the audience and then, in Mitch Podolak’s words, 'You enter a special world. You step outside normal society for three days and enjoy a totally non-alienating experience. What could be better?'" - Hal Wake.

Founded in 1978 in Stanley Park, the Vancouver Folk Music Festival presented its second festival at Jericho Beach Park a year later, and has been held here in mid-July ever since. Internationally-renowned, it is Vancouver’s longest-running outdoor festival, annually attracting artists and audiences from around the globe. A debt of gratitude is owed to founders Mitch Podolak, Ernie Fladell, Frances Fitzgibbon, Lorenz von Fersen, Colin Gorrie and Gary Cristall for their vision, and to the dedicated volunteers who continue to make it happen.

The Vancouver Folk Music Festival is a unique community-based celebration with an internationally-renowned reputation for presenting the finest traditional and contemporary folk and roots music artists from around the world. Celebrating its 40th anniversary in 2017, it continues to be one of the city’s most beloved, enjoyed, and respected events. The Festival draws 38,000+ enthusiastic attendees annually to beautiful Jericho Beach Park, folks eager to experience the music and culture of more than 60 international, national, and local acts. Every year, two and even three generations of families join friends and fellow community members to share in the music, dance, food, children’s activities – and the magical ambiance of the festival.

History of the Festival

A forerunner was the Folk Fair held at Brockton Point by the Folk Festival Society in May, 1942. Inspired by Winnipeg Folk Festival director Mitch Podolak, Vancouver cultural planner Ernie Fladell staged the first festival in Stanley Park in 1978, with help from Frances Fitzgibbon, Lorenz von Fersen and Gary Cristall. The festival moved to Jericho Park, still fresh in the public’s imagination from Habitat Forum, the following year. Sponsored by the city the first two years, the festival came under the control of the newly established, non-profit Vancouver Folk Music Festival Society late in 1979.

In its early years the festival established and ran its own record label and distribution company, Festival Records. The Vancouver Folk Music Festival takes place on the third weekend of July at Jericho Beach Park. It is the longest-running outdoor festival in Vancouver. Over the years the Vancouver Folk Music Festival has played a key role in the development of artists and audiences on a regional, national and international level. The society continues to honour the same traditions with an emphasis on emerging and diverse artists.

An excerpt by Hal Wake written in 2002 for the 25th anniversary of the Vancouver Folk Music Festival, from the VFMF website.

To achieve the status of a true legend, it should have started differently. It should have started with the artistic director of the Winnipeg Folk Festival, Mitch Podolak, looking across the prairies fixing his penetrating, visionary gaze westward and determining right then and there that he was going to establish a folk music festival in Vancouver. It was the mid-seventies and what better time to deliver the joyous sound and enriching experience for the benefit of the masses. But this isn’t Hollywood, thank god, and the reality is that Mitch simply wanted to escape the mosquitoes and biting cold of Winnipeg for a softer life in Lotus Land. Mitch never achieved his dream of making a home here, but, thank god again, the Festival did.

The first step in executing his plan was finding a local champion, preferably one with money. He found one, or perhaps more accurately created one, in Ernie Fladell. Ernie was the Cultural Planner in the Social Planning Department for the City of Vancouver. […] Twenty-six years later, Ernie’s memory of the trip [to Winnipeg] is crystal clear. “Mitch had me picked up at the airport and then took me on these winding back roads, in the dark and it seemed to take forever. Finally, I was dropped off in some parking lot and I had no idea where I was. Someone grabbed me by the elbow and we were stumbling along and suddenly I was led up some steps backstage and a guy said, ‘Hi, I’m Mitch,’ and he shoved me past the edge of a curtain and there I was, practically on stage with Sweet Honey in the Rock in front of 15,000 delirious fans. I was hooked.”

Mitch agrees that’s how it happened, but it was all part of the plan. “I set him up. I had it all timed meticulously from the moment the plane landed, including the long car ride. I didn’t want him to ease into it. I wanted to get Ernie swept away. I timed the entire show so that he would have something incredible to see and it worked.”

A year later at Stanley Park, the euphoria of the Winnipeg stage had given way to opening night jitters at the birth of a brand new festival. A Vancouver team had been established including an energetic city staffer, Frances Fitzgibbon, her colleague, lanky site manager, Lorenz von Fersen, and a young political organizer named Gary Cristall.

They weren’t building the event from scratch, however. Volunteers from Winnipeg had taken time off work, piled into cars and at their own expense, driven all the way to Vancouver to help out. Each Winnipegger was paired with a volunteer from Vancouver so that their hard-won experience in mastering the immense task of mounting the event could be passed on. Frances Fitzgibbon confesses she expressed some misgivings “When Mitch first raised the idea of a volunteer cadre, I thought, ‘ gosh, wouldn’t it be more efficient with paid staff?’ I was absolutely dead wrong. When you have people meeting, talking, caring, taking responsibility – they poured their heart into everything. It was actually very moving.”

Since that first Festival, some of the original volunteers have returned every year to form the network that has become the backbone of the operation. One of the responsibilities that wasn’t taken on by volunteers at that first Festival was security.[…] When Alice Macpherson suggested enlisting a volunteer committee to develop a new approach to security, they went with it. To this day, a well-trained, experienced volunteer group uses equal measures of reason and firmness to defuse difficult situations at the Festival. They are so good you often don’t realize they are there.

According to the founders, it required similar sophisticated skills to convince the Park Board to agree to the use of Jericho Beach Park for the second and subsequent Festivals. Managing the site to minimize disturbance for the neighbourhood, the wildlife and the environment, has been critical to the continued success of the Festival. Managing the political process has been no mean feat either. “It seemed like every year,” says Gary Cristall, “We’d go to Park Board and come out of there with a 4-3 vote in our favour. One vote going the other way, and the whole thing would have been over.”

On the first night, of the very first Vancouver Folk Music Festival, it rained. “We didn’t know whether anyone was going to come – period – and then the rain started to come down,” Gary Cristall remembers thinking. Frances still has a vision of the splashback bouncing onto the stage, but the performers kept going.[…] “Later that night,” says Gary Cristall, “when Pied Pear worked their magic and got a standing ovation in the rain, I knew we were on to something.”

Saturday afternoon, the rain mercifully ended and with the sun now shining and with the magnificent ocean and mountain backdrop at the Point Stage, Mitch Podolak witnessed the single best blues workshop he has ever seen in a lifetime of festivals. “There was Leon Redbone, Odetta, Leon Bibb and John Hammond. But it was Roosevelt Sykes, the 70-year-old piano player, that really blew me away. He was joined on stage by Jane Vasey the young pianist for the Downchild Blues Band who wasn’t even a guest at the Festival. And at the end of what seemed like an hour of furious, brilliant jamming, he stood up and turned to her, took off his hat and bowed.”

No one knows for sure, but the most common estimate is that there were somewhere between 10,000 and 11,000 folks at that first Festival. Enough, it seems, to have convinced all concerned that it was worth the effort and struggle to do it all over again for another year and another and twenty-two more[.]

Frances Fitzgibbon isn’t surprised. “All of us had the belief that it would be around for twenty-five years. We didn’t publicly talk about the longevity of it, but the idea was strong and rooted somewhere real. People come to the festival and leave the site altered, different somehow.”

History of the Land and its First People

Not long ago Jericho Beach was a gathering place for the local First Nations people who have inhabited these lands for over 10,000 years. The village site was named Ee-yullmough – which means “good land.” Since 2011, the Folk Music Festival has paid tribute by offering First Nations walks through the forest and beach that surrounds the festival – recounting history, telling stories and connecting with the plants and animals. The walks are led by Wayne Point, the Archaeological Technician Field Worker with the Treaty, Lands and Resources Department of the Musqueam Indian Band and Celia Brauer from the False Creek Watershed Society.

We presented the Places That Matter plaque to the Vancouver Folk Music Festival at their 35th Anniversary weekend in 2012. The plaque is currently located by the path on a sign pole by the East Concession. 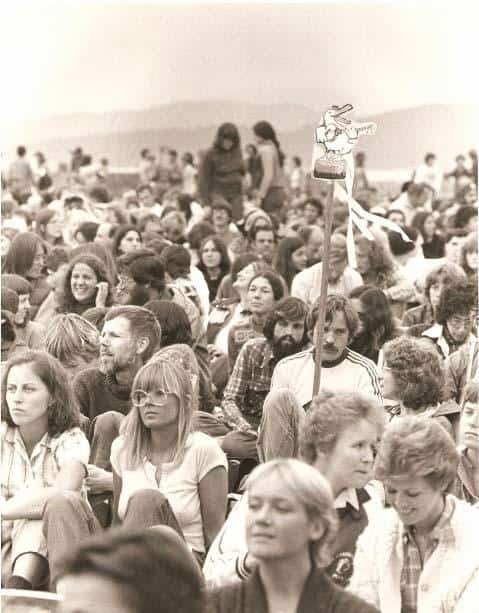 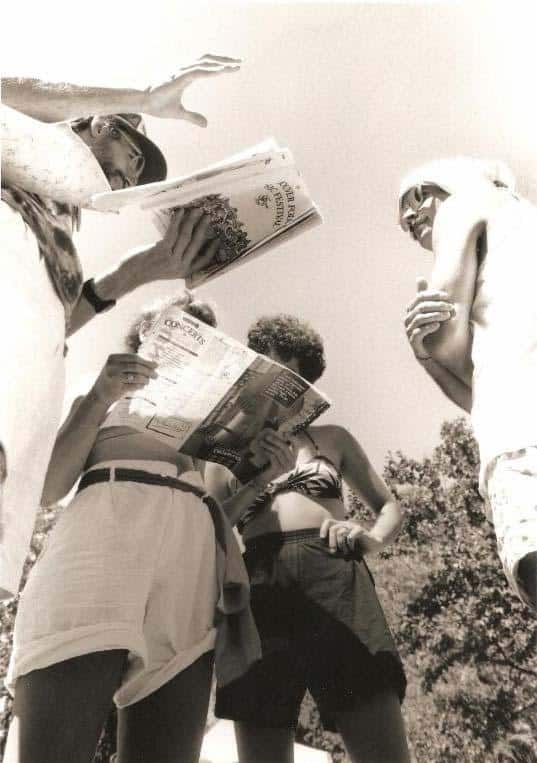 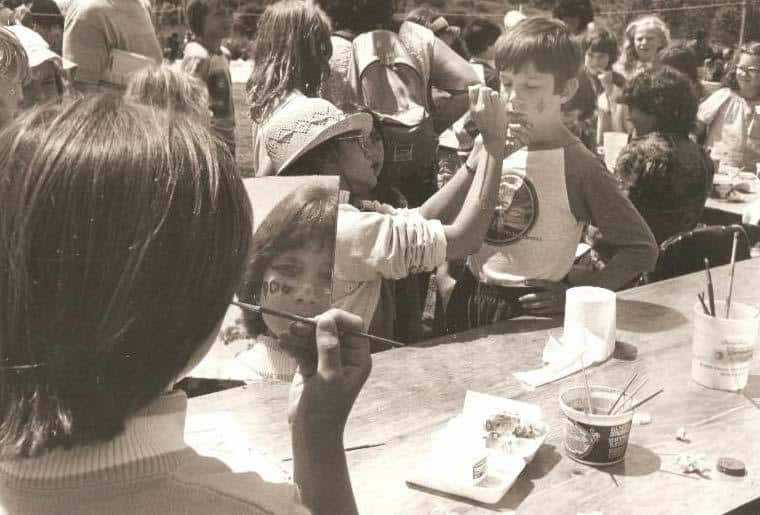 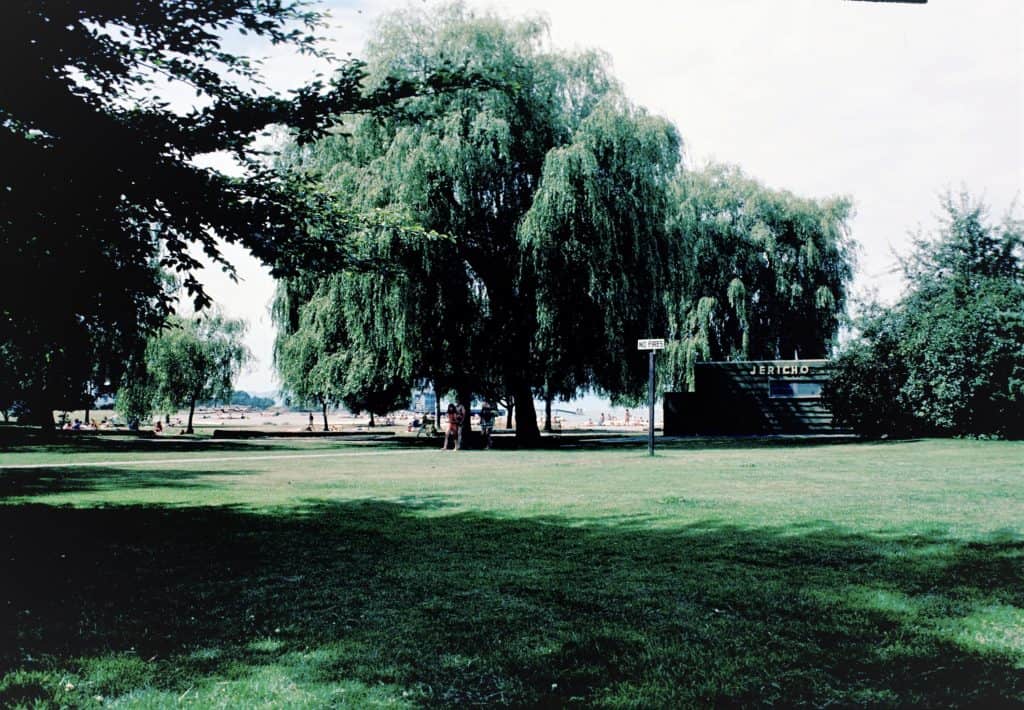 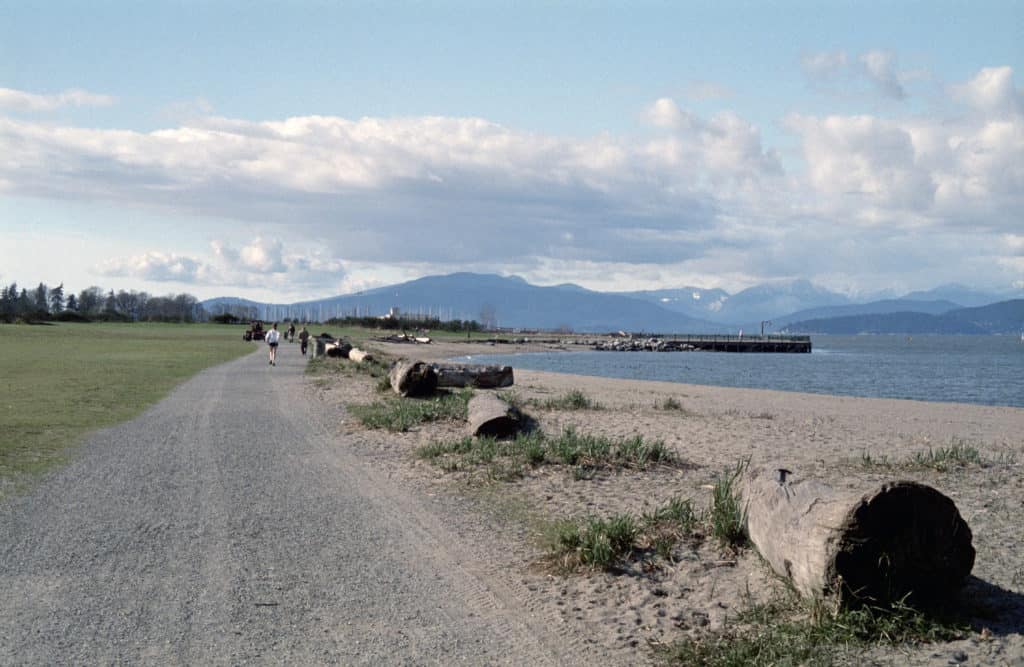 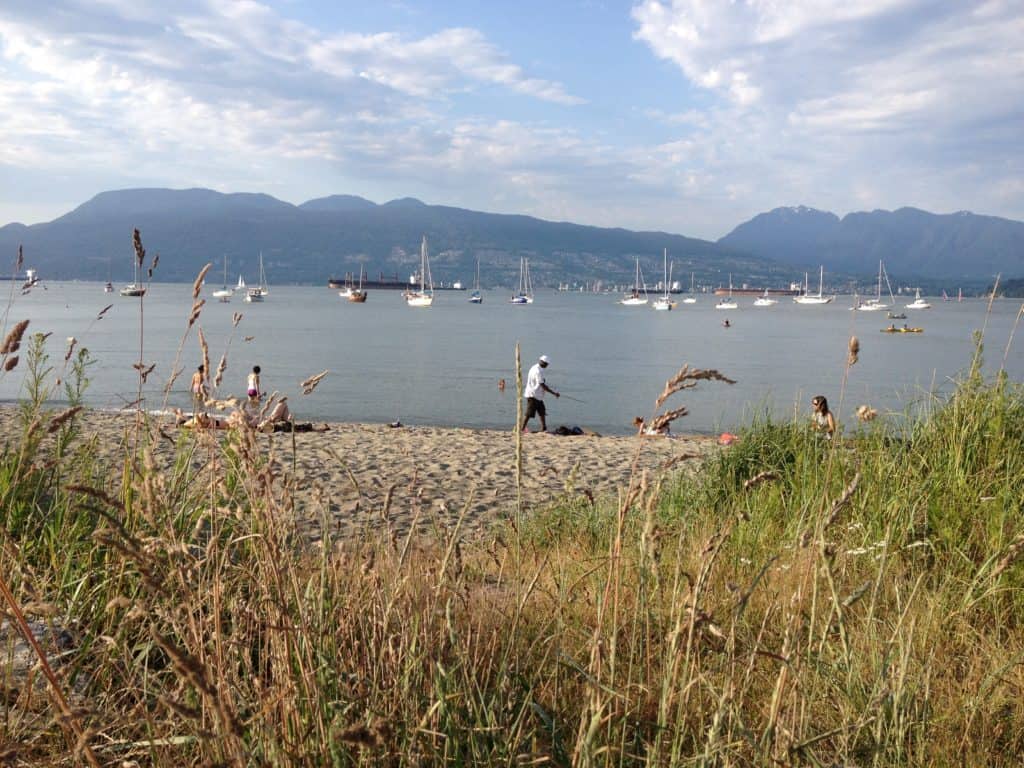 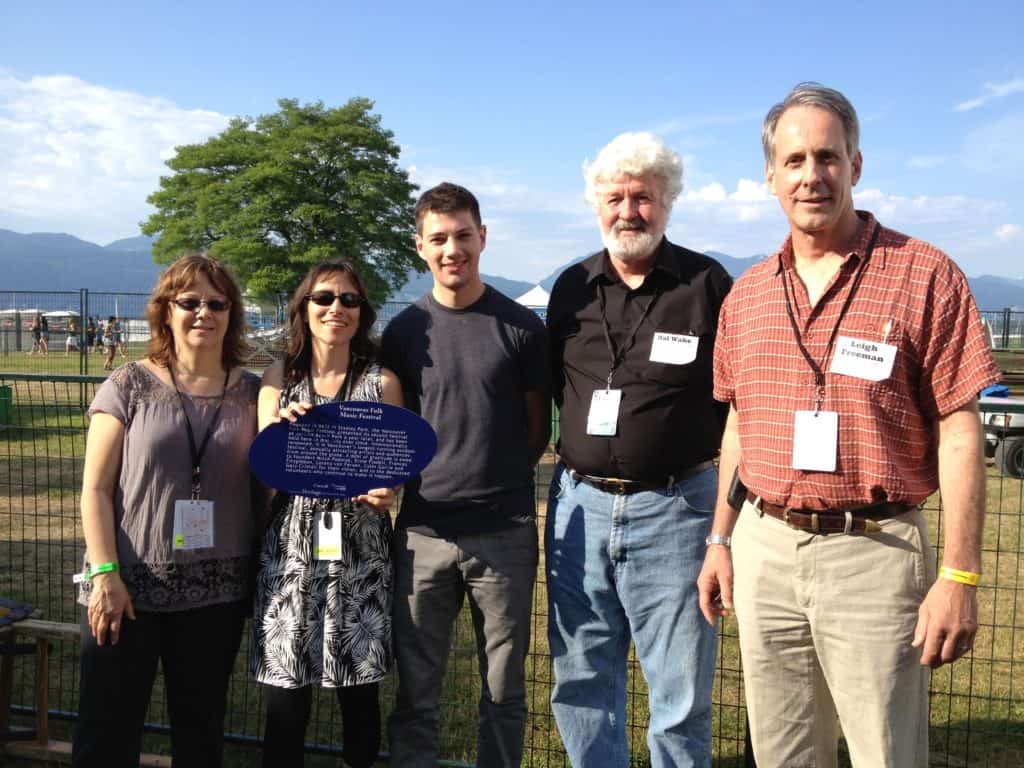 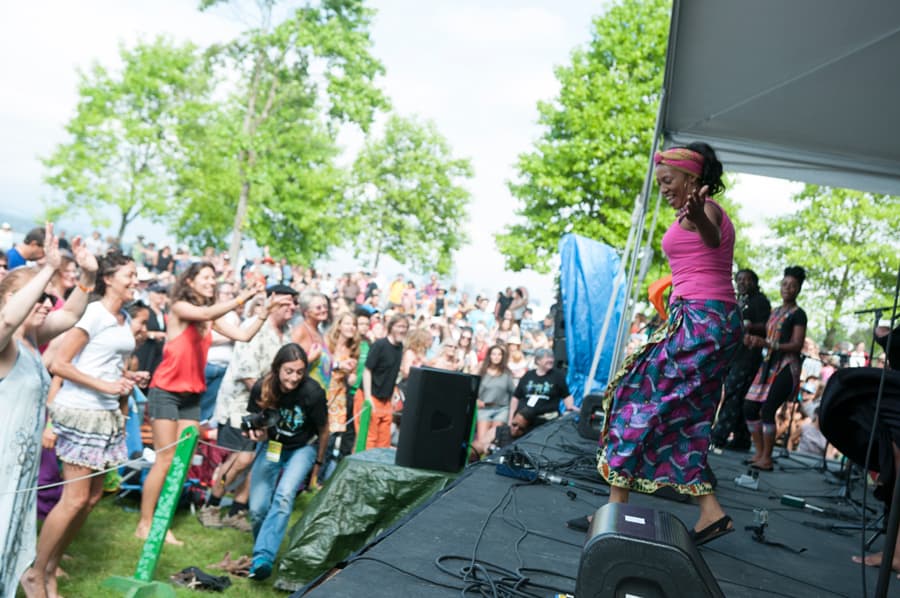 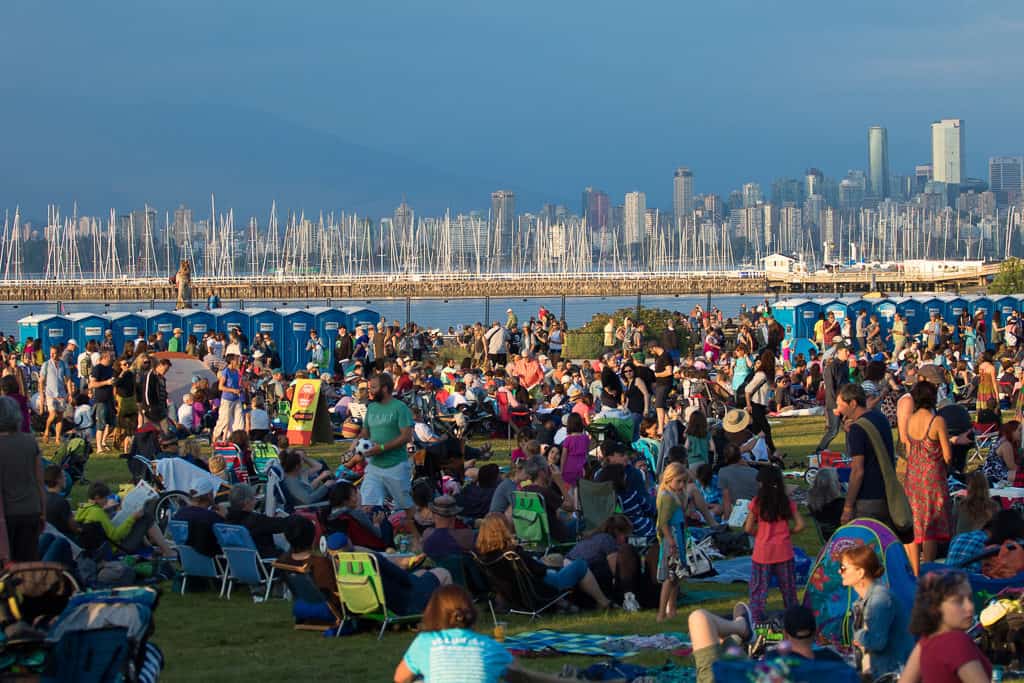 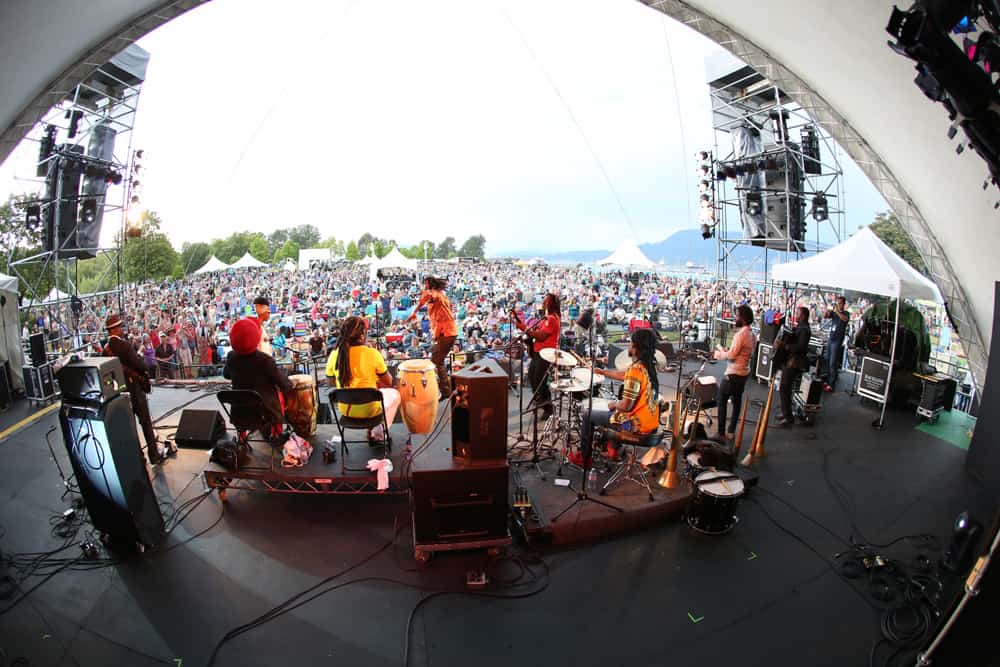 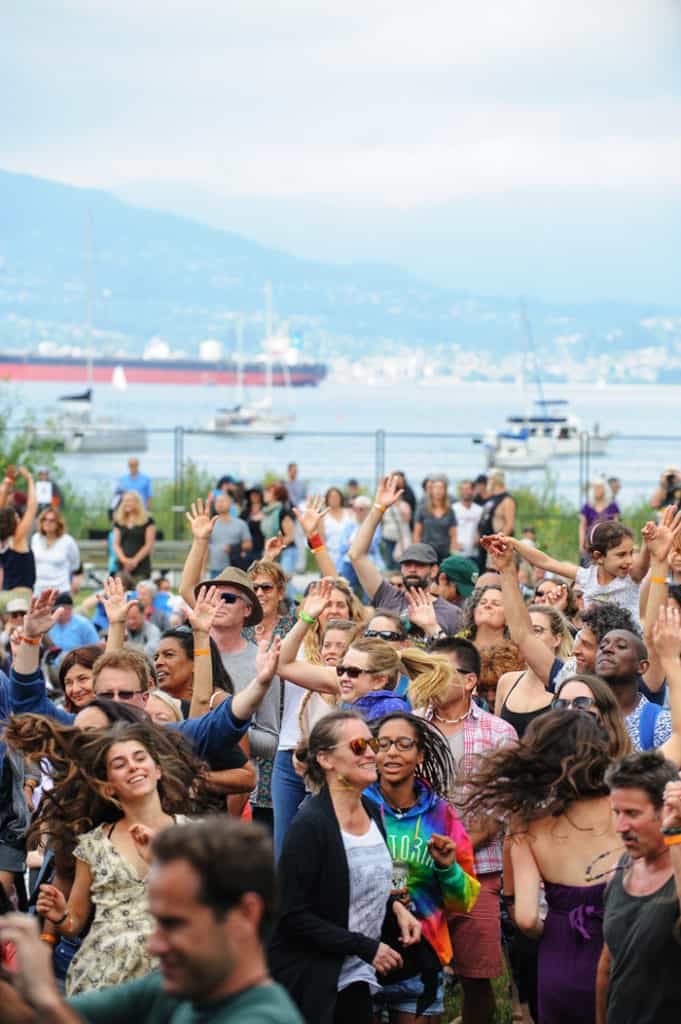 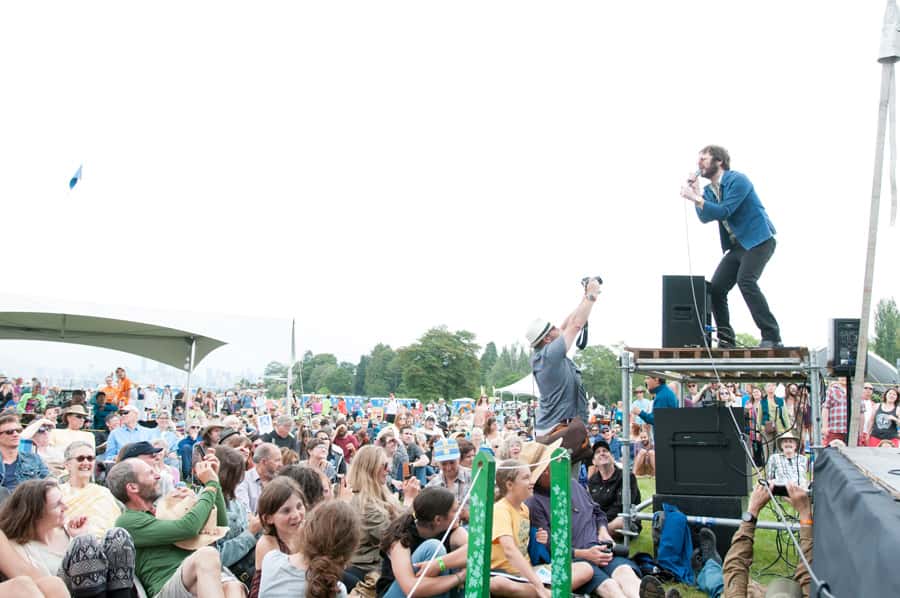