"Surprisingly, these weighty stone compositions which have taken muscle as well as artistic talent to fashion, are the work of a woman." - Charles J. Woodworth, "Woman Shapes Beauty in Stone." The Province, 1940.

Edith Beatrice Catherine Lennie created the relief panels flanking the former main entrance to the Shaughnessy Military Hospital. They depict a Canadian Medical Corp nurse assisting an injured soldier and a Canadian Medical Corps doctor holding a wounded serviceman. The panels were commissioned by architects Mercer and Mercer for their 1940 Streamlined Moderne design for the hospital. Lennie, born in 1904 in Nelson, B.C., studied under noted Vancouver sculptor Charles Marega. She received a number of important public sculpture commissions during her career.

A Military Hospital
Shaughnessy Hospital has its origins as a veterans hospital constructed by the federal government in 1917. In 1940, a new military hospital was built for the Department of National Defence. Designed by Mercer & Mercer in a Streamlined Moderne style, it is one of the last surviving examples of mid-twentieth century hospital architecture in Vancouver. It served as an important care facility for injured servicemen as well as a residence for veterans. In 1951, Princess Elizabeth and Philip the Duke of Edinburgh included the hospital in their Vancouver itinerary. The veterans hospital was closed in 1992, after which the buildings were integrated into the Oak Street campus of BC Children’s Hospital and BC Women’s Hospital & Health Centre, run by the Provincial Health Services Authority. In 2013, two wings of the Shaughnessy Hospital were demolished to make way for a new Acute Care Centre. Four heritage elements associated with the building – the former main entrance, columns, bronze grill and two Beatrice Lennie reliefs – were retained, although they no longer feature prominently as the hospital’s entryway.

The Reliefs
The two relief panels by sculptor Beatrice Lennie “are an integral part of the sophisticated, Streamline Moderne façade of the hospital” according to Heritage Vancouver. They depict a Canadian Medical Corp nurse helping an injured soldier and a Canadian Medical Corp doctor holding a wounded serviceman. “Into the stone panels for Shaughnessy Hospital went hours of research into details of doctors’ and nurses’ uniforms, crests, crowns and ample leaves, a Latin inscription”, wrote Charles J. Woodworth in The Province in 1940, expressing surprise that the works had been produced by a woman. “And into them too went strenuous weeks of running up and down ladders and scaffolding carrying tools and heavy buckets of clay to form the figures for final casting in composition stone”.

Beatrice Lennie: A Western Sculptor
Edith Beatrice Catherine Lennie was born in Nelson, B.C. in 1904 or 1906 (records are conflicting). As a girl, she moved to Shaughnessy where she grew up in a large house decorated by noted Vancouver sculptor Charles Marega (who carved the Lion’s Gate Bridge lions). Beatrice Lennie would later study with Marega at the Vancouver School of Decorative and Applies Arts (now Emily Carr). After graduating from the School of Fine Arts in San Francisco, Lennie returned to Vancouver and became an active member of the community, teaching at Crofton House, the Vancouver Art Gallery and UBC. In addition to private commissions, she received many commissions for public art projects throughout her career, including bronze work for the Pattulo Bridge (1937) and the exquisite elevator doors for the Federal Building in 1938 (now part of the Sinclair Centre), as well as a number of decorative items for the “new” Hotel Vancouver in 1938. Apart from the Shaughnessy panels, Lennie created a number of other relief sculptures including a large panel for the Labour Temple on West Broadway in 1949 and “Christ and the Children” in 1950 at Ryerson Memorial Church in Kerrisdale. “One of only a few women working in sculpture in the 1930s and 1940s in Canada, Lennie worked hard to maintain her professional standing,” according to the Vancouver Art Gallery. “She always called herself a sculptor, rather than a sculptress.”

Where do I find the Shaughnessy Hospital reliefs?
“The doors are no longer the main entrance, as the Children’s and Women’s Hospital has been built in front of them, so that there are now only one of a pair of doors that open into an interior courtyard outside the new cafeteria”, explains Gary Sim, author of the British Columbia Artists database. “To see them, go to Children’s and Women’s Hospital, find the cafeteria, go out into the courtyard. On your right and up one level will be the original main entrance. Go up the stairs, the panels are on either side of the doors at the top of the stairs”. 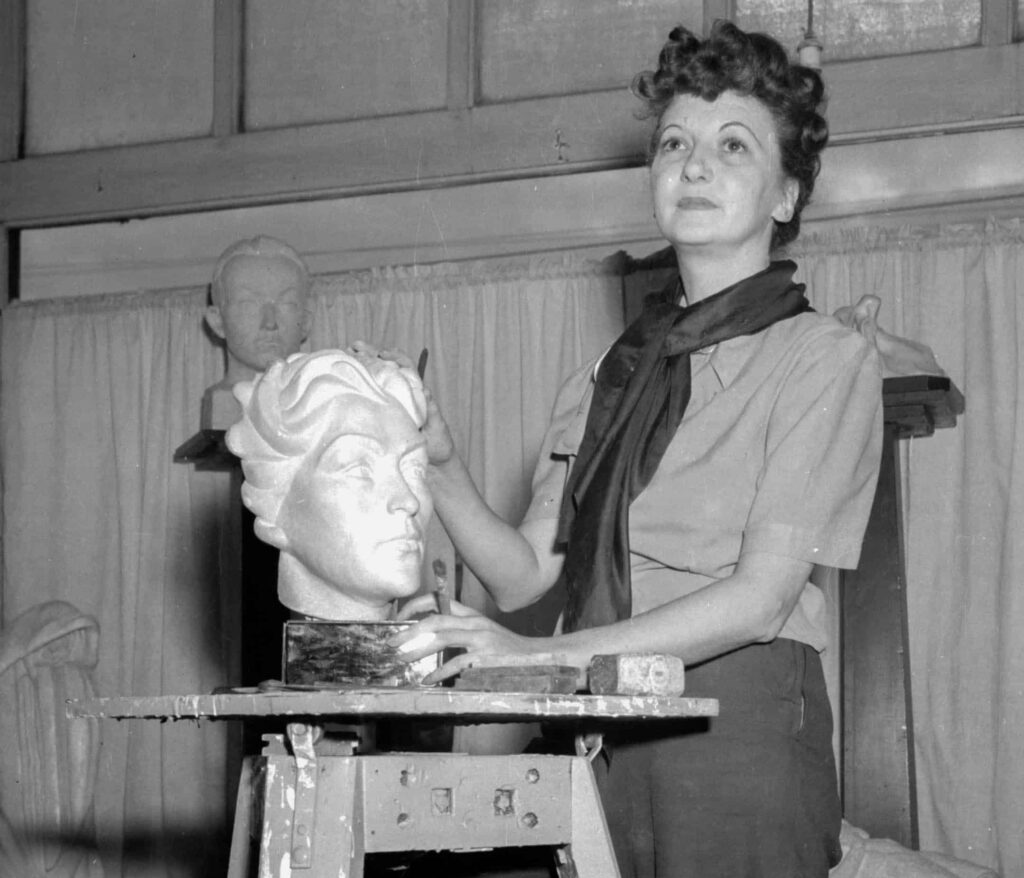 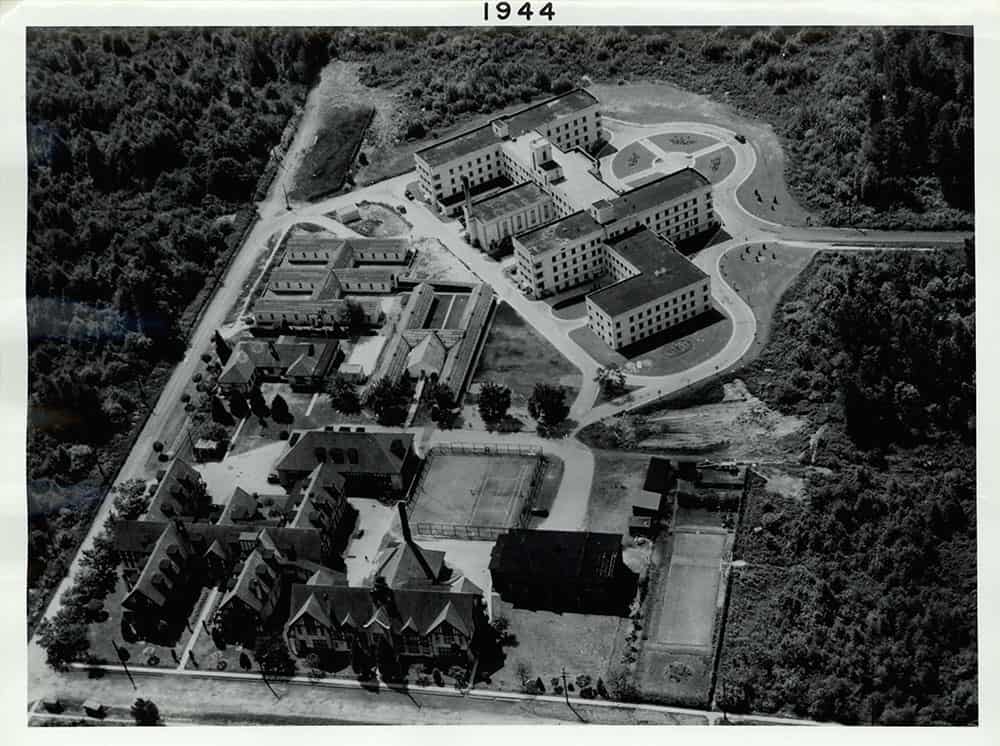 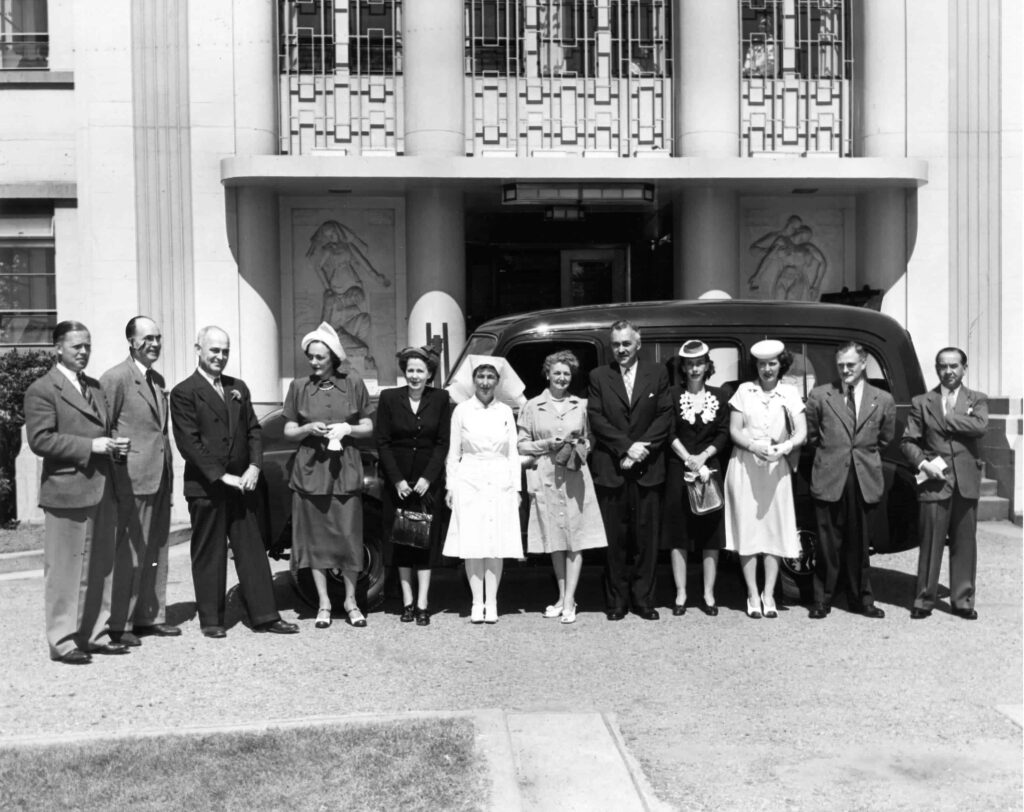 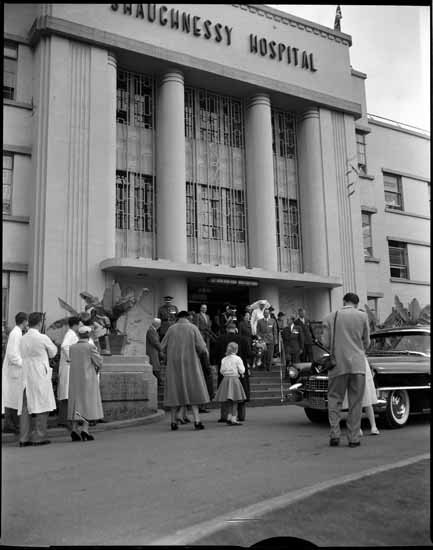 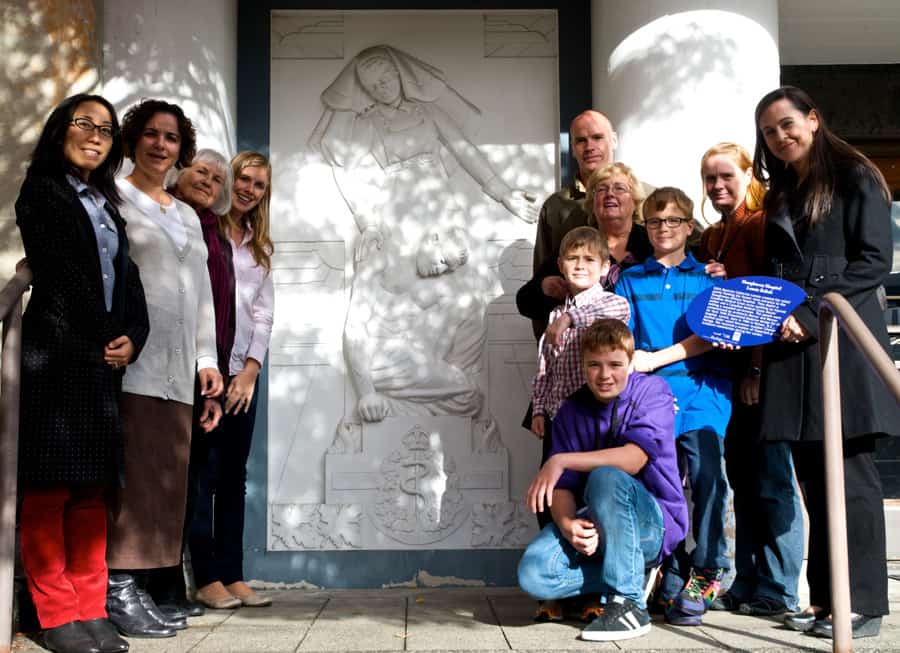 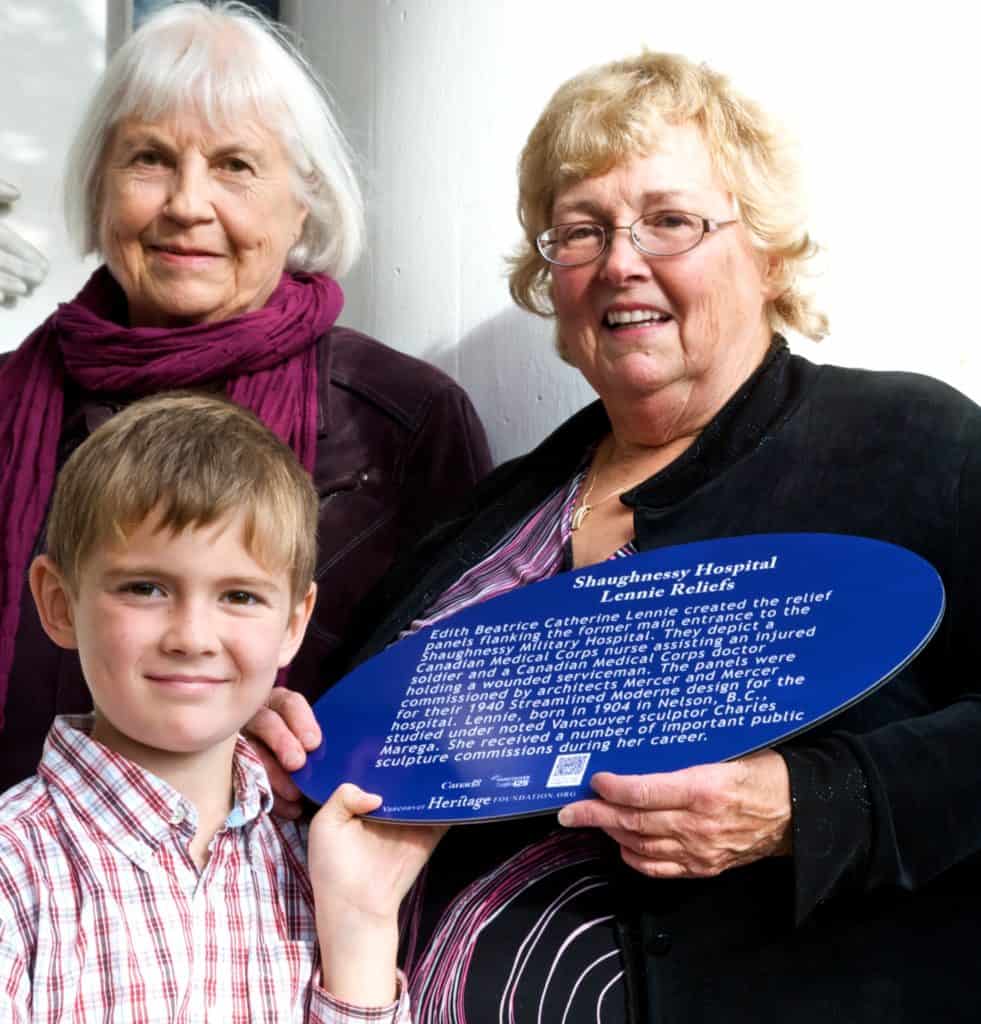 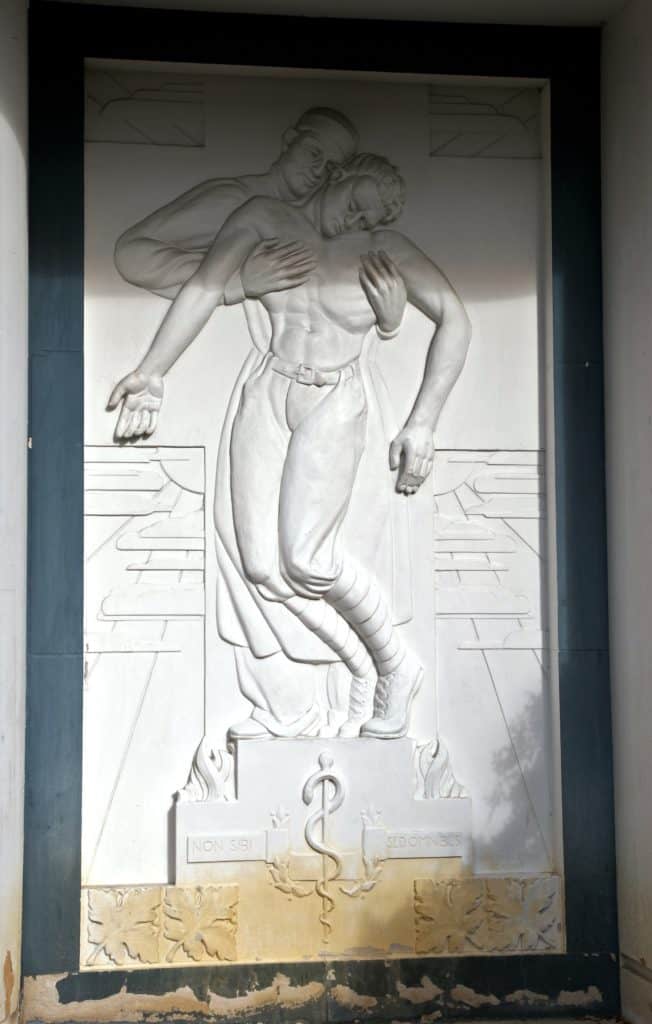 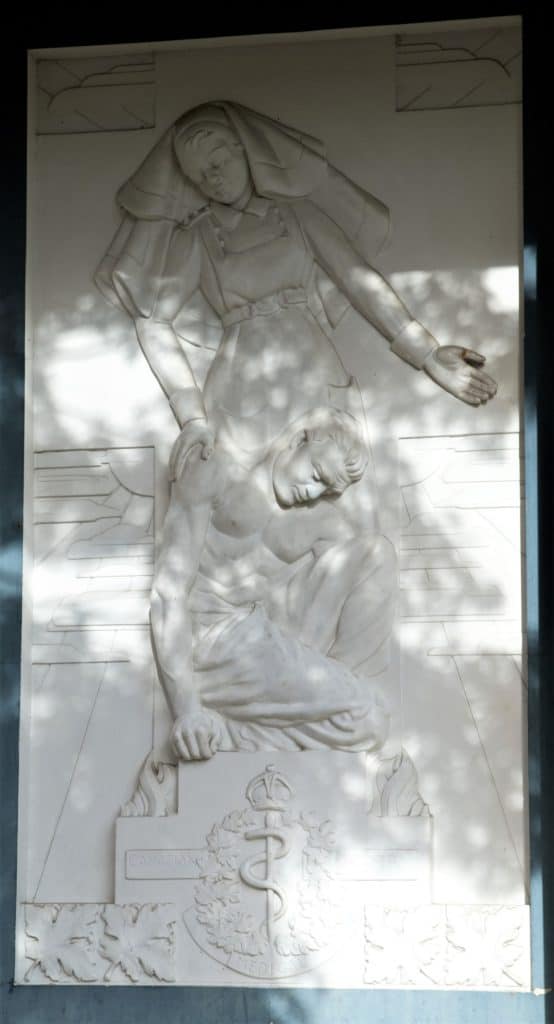 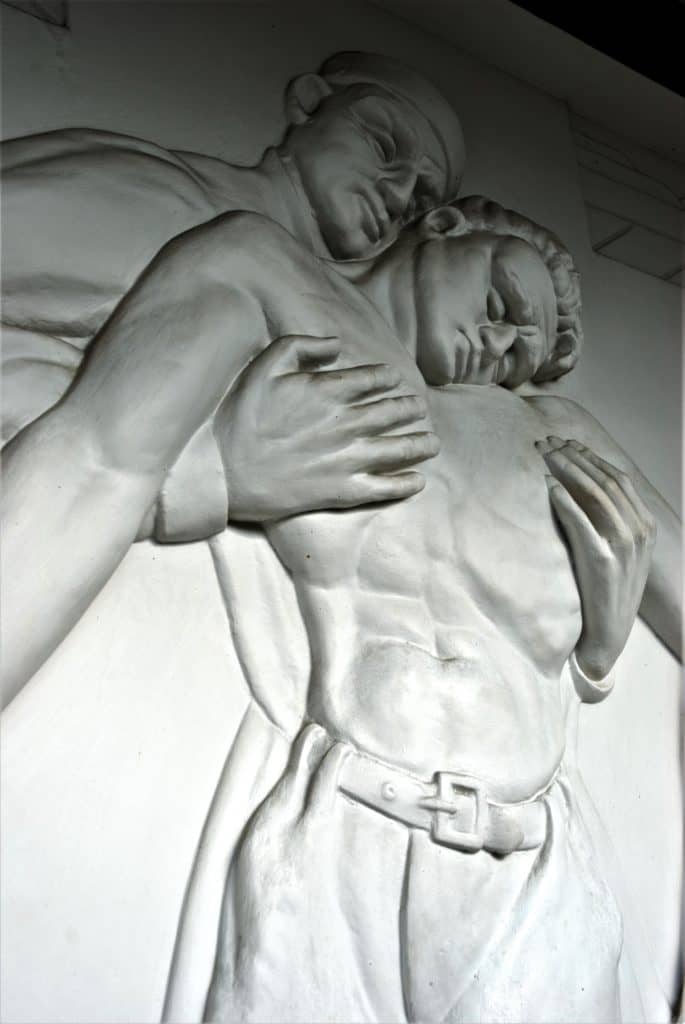 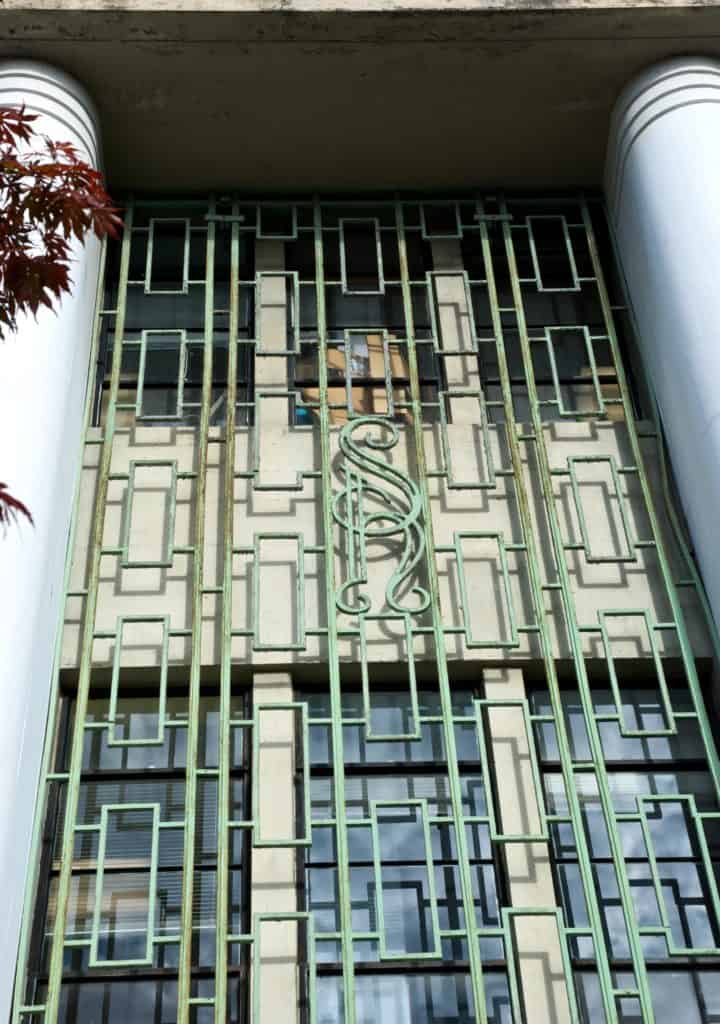 The hospital was designed with a grand symmetrical entranceway with ornate metalwork.

The hospital was designed with a grand symmetrical entranceway with ornate metalwork.