"I've had grown men tell me that when they were a little boy they used to look up at the sign and they thought it was the most beautiful faucet. We knew the sign had to go back up. It's the heart of Cambie Plumbing and the heart of Fraser Street." - Sally Gibson

Jon D. Gibson went into the plumbing and heating business in 1946, intending to open on Cambie Street, but a last-minute real estate mix-up forced his move eastward, where he installed his neon sign, the first one on Fraser Street. Despite a serious fire and problems conforming with the city’s sign bylaws, Cambie Plumbing and Heating’s iconic neon faucet continues to brighten his original storefront.

A Last-Minute Address Change
Cambie Plumbing & Heating Ltd. has been in operation since 1946 when it was opened by Jon D. Gibson. As the name suggests, Gibson planned to open the business on Cambie Street, but was forced to look elsewhere after his landlord got a better deal. He purchased the property at 3905 Fraser Street before the grand opening. Since the ads and the business cards were already printed up, and the now-famous neon sign had been ordered, the name remained Cambie Plumbing & Heating Ltd.

The First Neon Sign on Fraser Street
Cambie Plumbing & Heating Ltd. boasted the first neon sign on Fraser Street. The Cambie Plumbing faucet comes from an era of when every business on a street would sport a neon sign; there were an estimated 19,000 neon signs on the streets of Vancouver in the 1950s. The sign is typical of the animated neon of this period where an array of tubes on separate switches created the ‘moving’ water pouring from the faucet. That pouring water is unique among plumbing signs since the majority of the signs illustrated the problem of leaking or dripping faucets instead of one working as intended. And as with any good design, the Cambie Plumbing sign works equally well during daytime, displaying the sign painter’s skills, and at night.

Fighting for the Landmark Sign
The family-run business had a setback in 1991 when an arson attack destroyed the company’s original building. During rebuilding that same year they were told their neon sign would not be permitted back on the new building because it didn’t meet the current sign bylaw. The family appealed the decision and city relented, finally allowing the sign to be put back in place. Sally Gibson told the Courier that while the new store was being built, the family would find notes pushed under the door of the burned out building. “One little note said, ‘You have to put the sign back up because when my friend comes on the bus I tell her when she sees the taps to pull the buzzer,'” she said. Due to bylaw restrictions on street encroachments from items such as large neon faucets, the sign had to be pushed back into the building so it is within the property line. While this limits the sign’s visibility, it is one of the first examples of sign preservation in the city. Cambie Plumbing & Heating Ltd. is now owned and operated by E. J. Gibson, Jon D. Gibson’s son, and continues to provide service to the Lower Mainland. 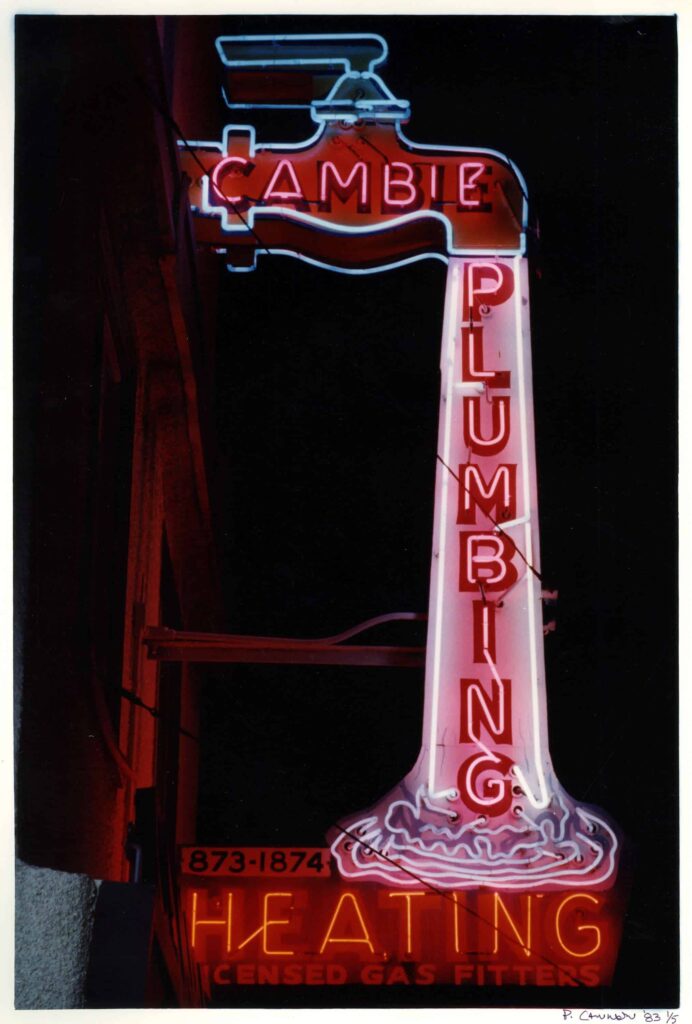 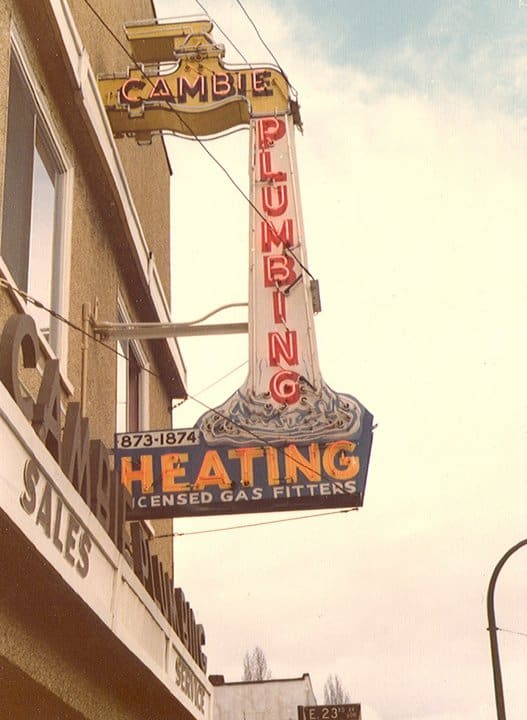 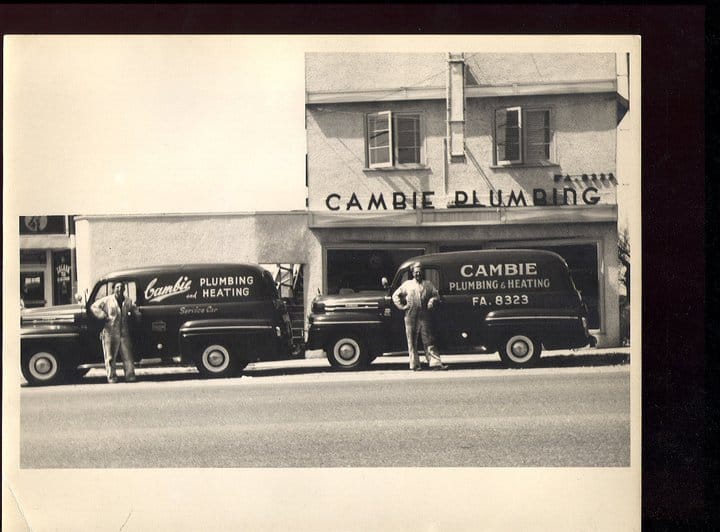 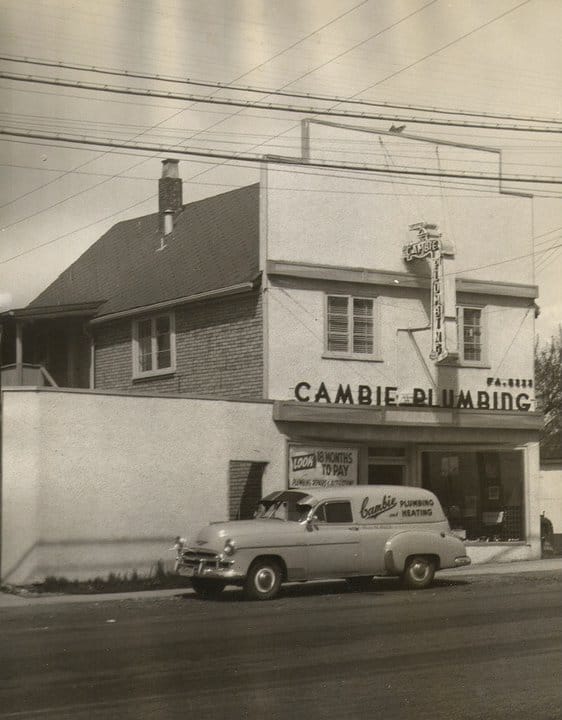 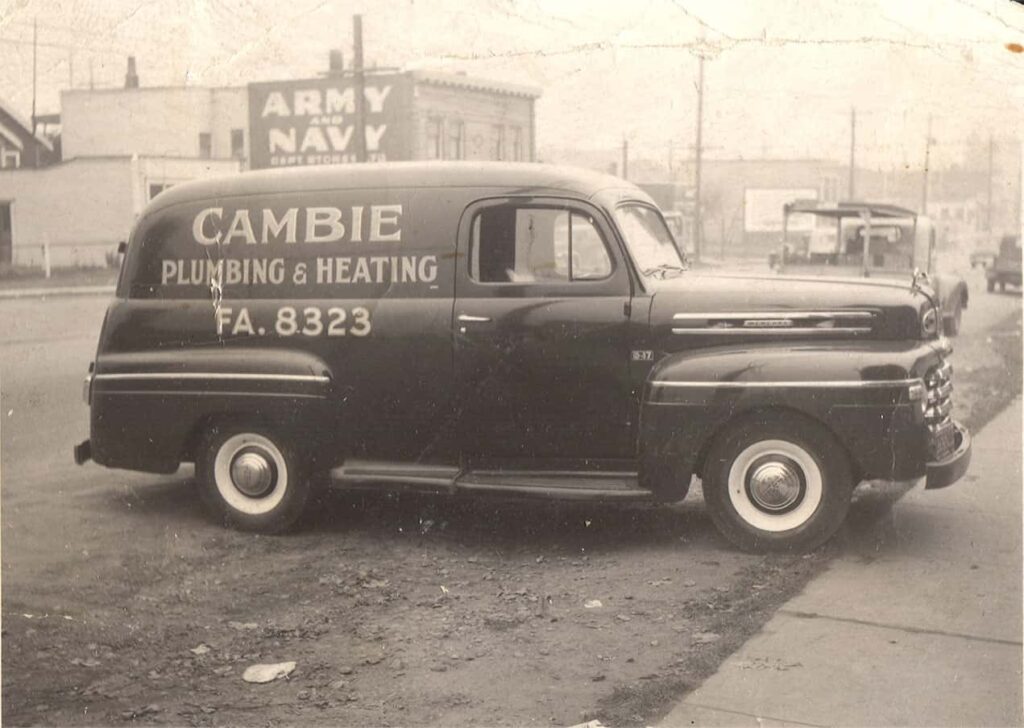 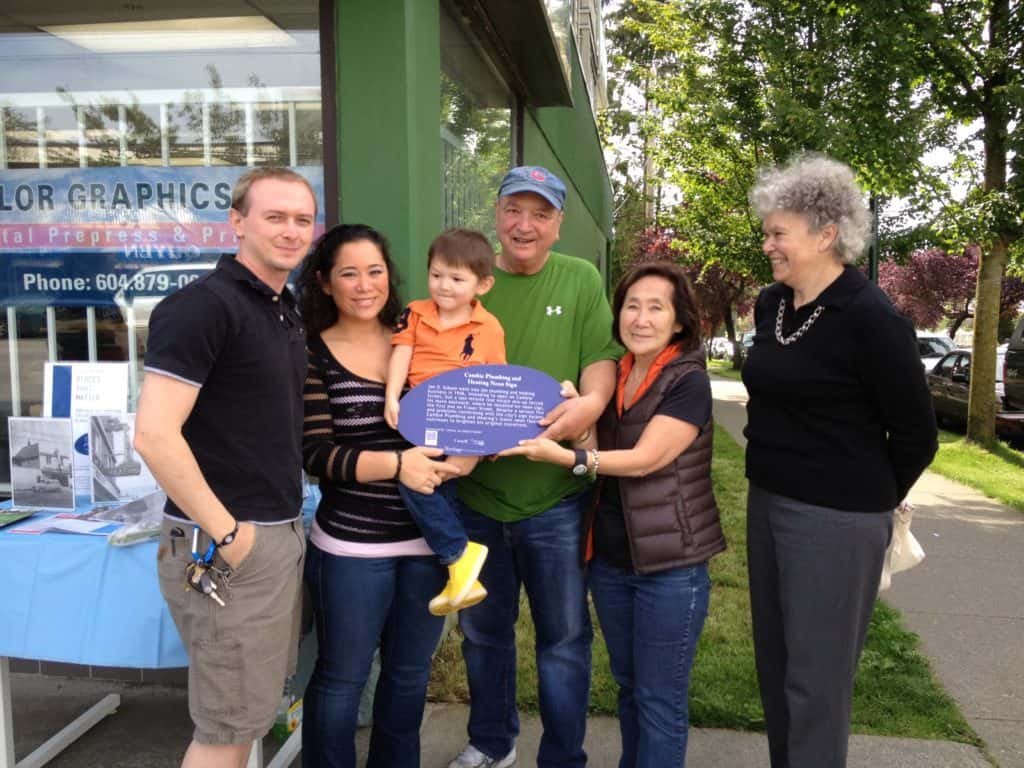 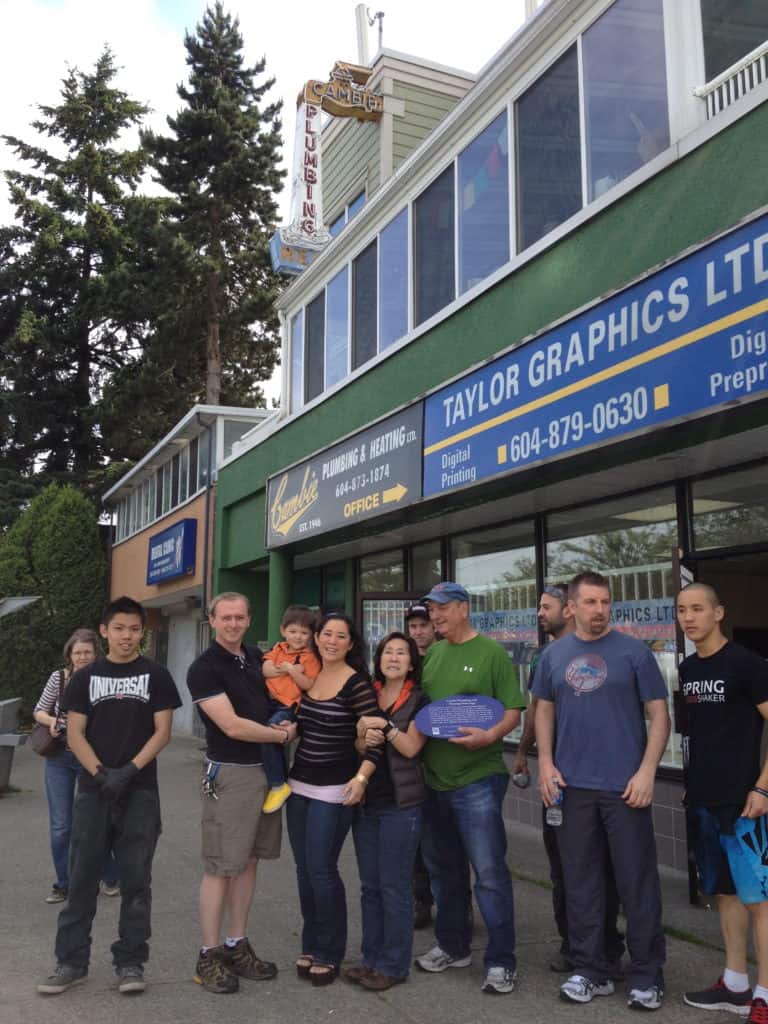 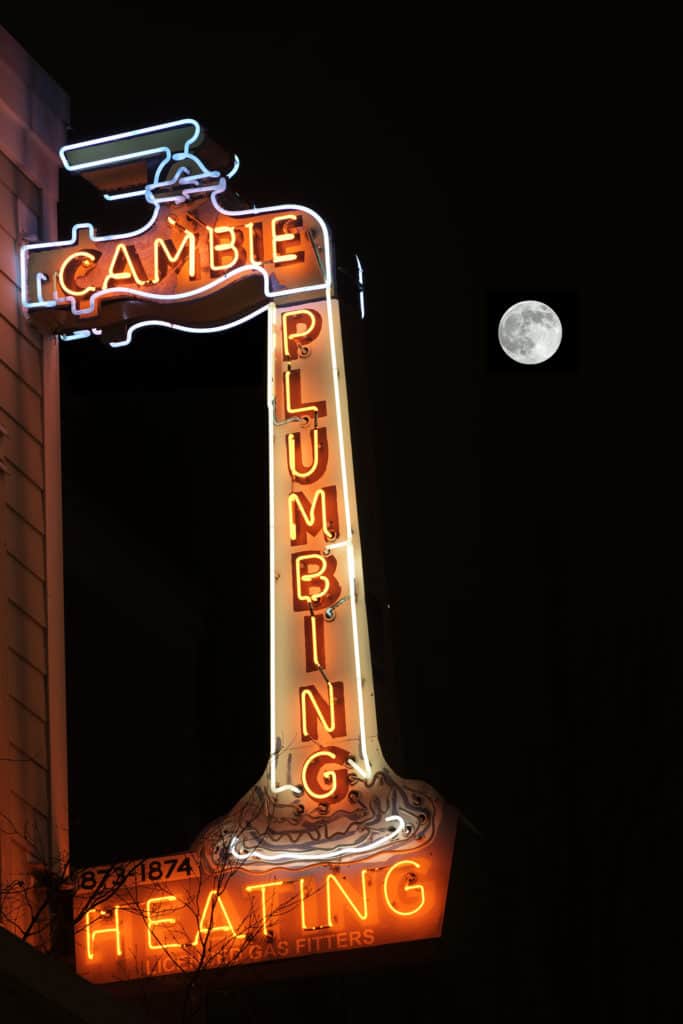 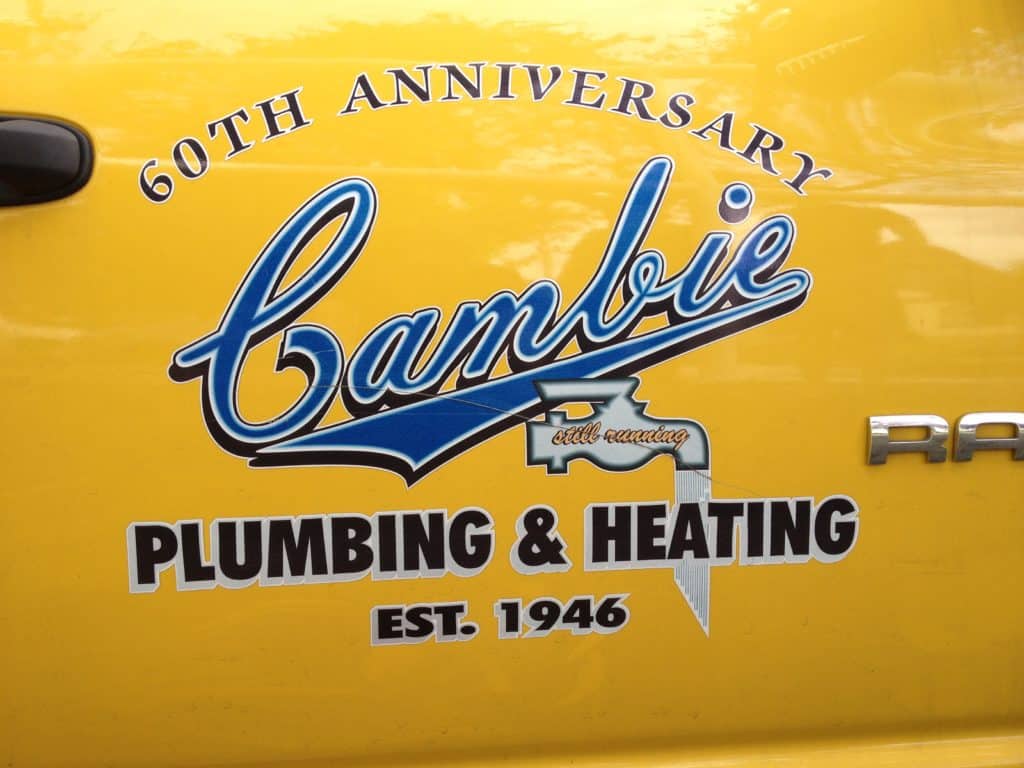 Plaque is located inside Cambie Plumbing and Heating Ltd.