“I don’t know if Vancouverites know it or appreciate it, but the Coaster has a world-class reputation. It’s one of those rides that people want to seek out amongst coaster connoisseurs.It’s a classic, thrilling roller-coaster, lots of hills, fast turns and well-paced. It is everything that a great roller-coaster could offer.” - Randy Geisler, American Coaster Enthusiasts organization.

Once threatened with demolition, the 1958 Wooden Roller Coaster is celebrated across North America as the last, still operating example of noted designer Carl Phare’s work. Built of Douglas Fir by Walker LeRoy, the coaster features a maximum drop height of 20m and speeds of up to 76km/h. As Canada’s oldest operating wooden roller coaster, it is designated as a “Coaster Landmark,” and a “Coaster Classic” by the American Coaster Enthusiasts organization.

This plaque is proudly sponsored by Pacific National Exhibition

Carl Phare – Roller Coaster Virtuoso
The wooden rollercoaster was designed by Carl Phare, widely acknowledged as the world’s foremost roller coaster builder. The Playland coaster was his last design, and the one he was most proud of. “I know I’ll never build another so I put everything I have learned over the past 56 years into this one. There’ll never be another one as good.” When the coaster opened in 1958, it was the largest in Canada and one of the two highest roller coasters in North America.

Construction and Features
The coaster cost over $200,000 (the equivalent of $1.6 million today) and was built on-site by 300 workers, including a group of Norwegian shipbuilders. The winding one-kilometre track is built of fireproof Douglas fir, which gives it a different give and feel from today’s steel competitors. The ride takes about 90 seconds and reaches speeds of 80km/h and a maximum drop of 20 metres. The coaster’s three trains, also designed by Phare, utilize eight open-front, single-bench, flange-wheeled cars.

The Coaster’s Predecessor
The wooden roller coaster was designed a year after the original PNE amusement park, Happyland, was closed. It replaced an earlier roller coaster designed by Phare, The Giant Dipper, which was torn down in 1948 to make way for an expanding Hastings Park Race Course. The Dipper was a crowd favourite and there was much opposition from the public when its demolition was announced:

“THEY’RE TEARING DOWN the Giant Dipper at Vancouver’s Hastings Park today to make room for the extension of the racetrack. This may be good news to adult followers of the galloping bangtails, but it’s something close to a major tragedy for thousands of youngsters. Shown viewing the crumbling skeleton with nostalgia and sorrow is 14-year-old Bob. Said Bob, ‘If they want to rip things apart in this town, why don’t they start in on a few schools?’ The Giant Dipper has been a top attraction at the midway since 1925. It cost $65,000. It was almost a mile long, and the cars reached 40 miles an hour. The longest sheer drop was 60 feet—a thrill credited with having hastened the ripening of many a beautiful friendship.” – March 6, 1948, The Province Newspaper

Recognition
Once threatened with demolition (the resulting fragments were to be used as garden ornaments in a proposed park that was to replace Playland) the PNE’s wooden roller coaster is secure. Celebrated across North America, the coaster is last example of Carl Phare’s work still operating today and it is also Canada’s oldest operating wooden roller coaster. On the coaster’s 50th birthday the City of Vancouver declared it a site of special significance to the city and in 2009, the American Coaster Enthusiasts organization (ACE) designated it as their 21st Coaster Landmark and as a ‘Classic’ roller coaster, the only one to receive both designations. 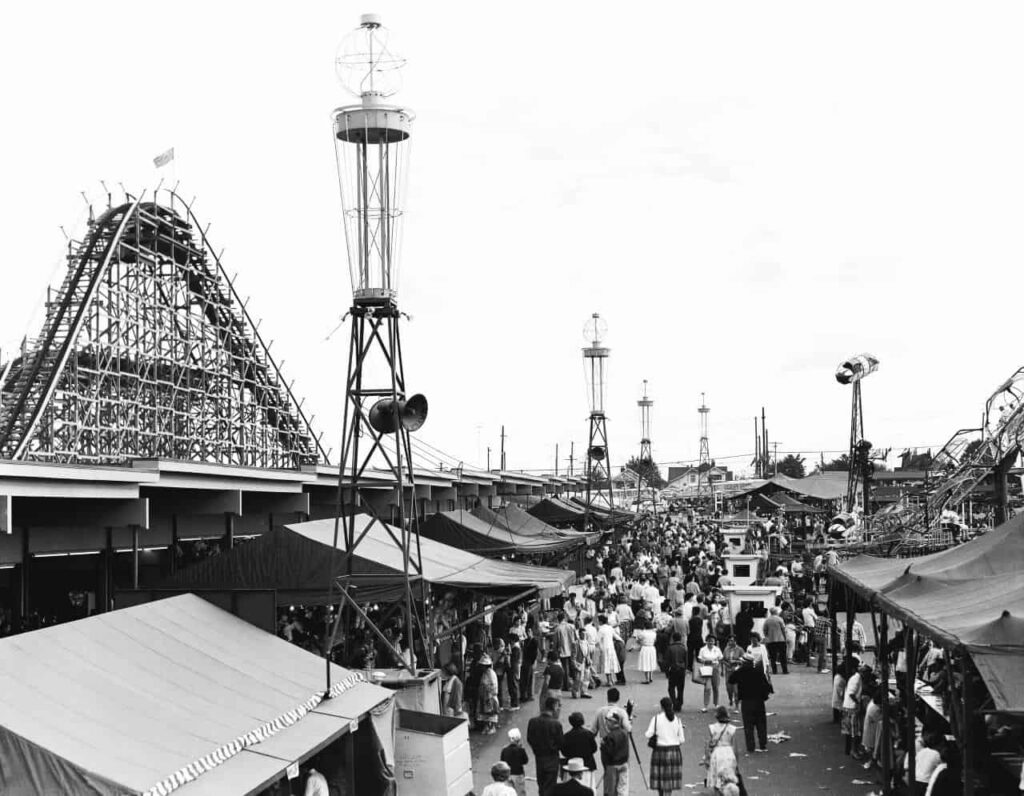 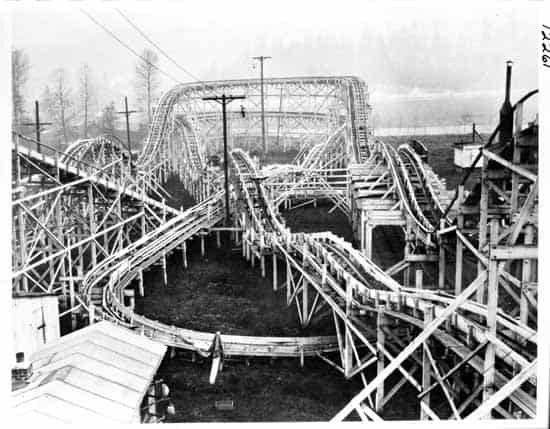 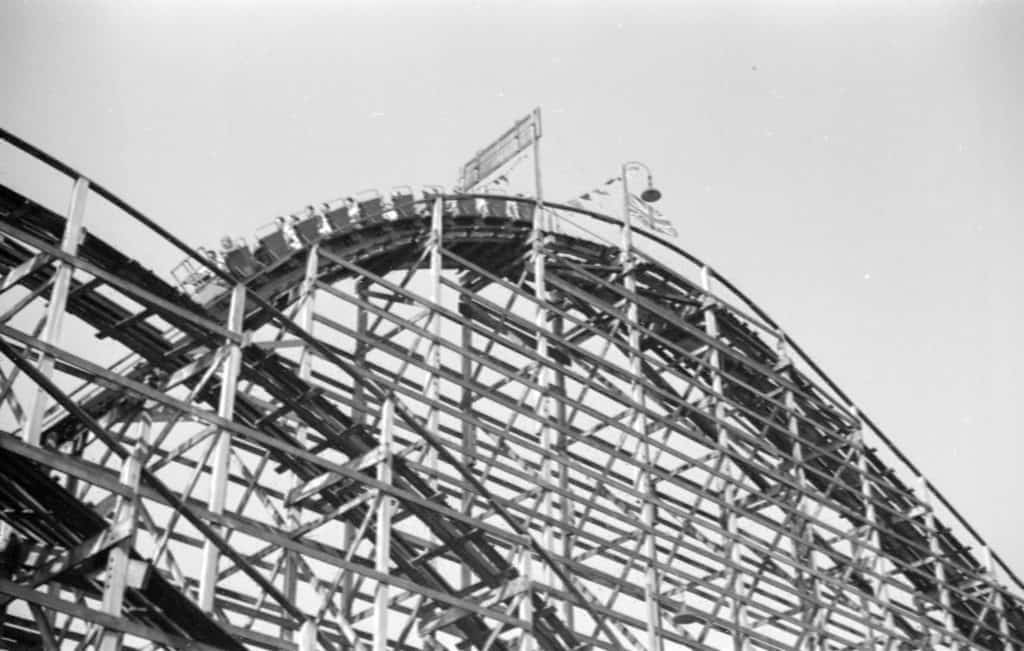 Cars at the top of the Giant Dipper roller coaster at the Pacific National Exhibition midway at Hastings Park in 1936. CVA 260-500, photographer James Crookall. 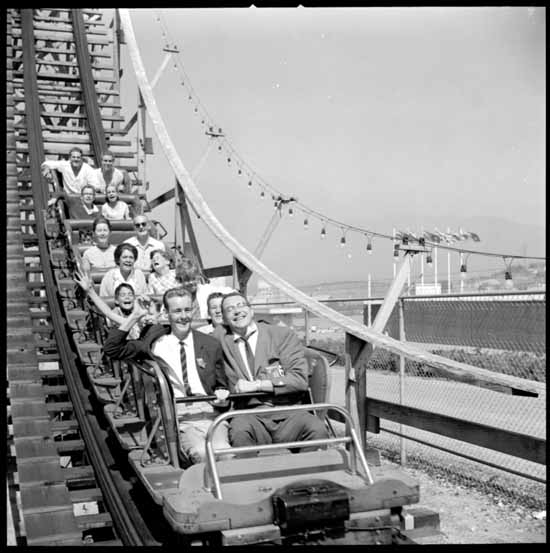 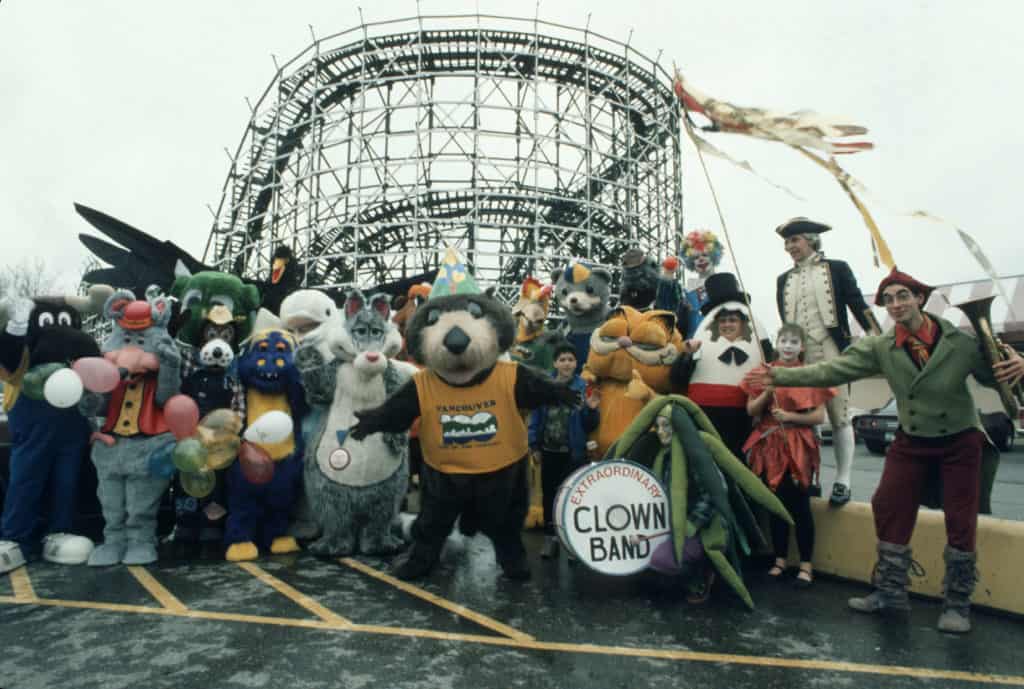 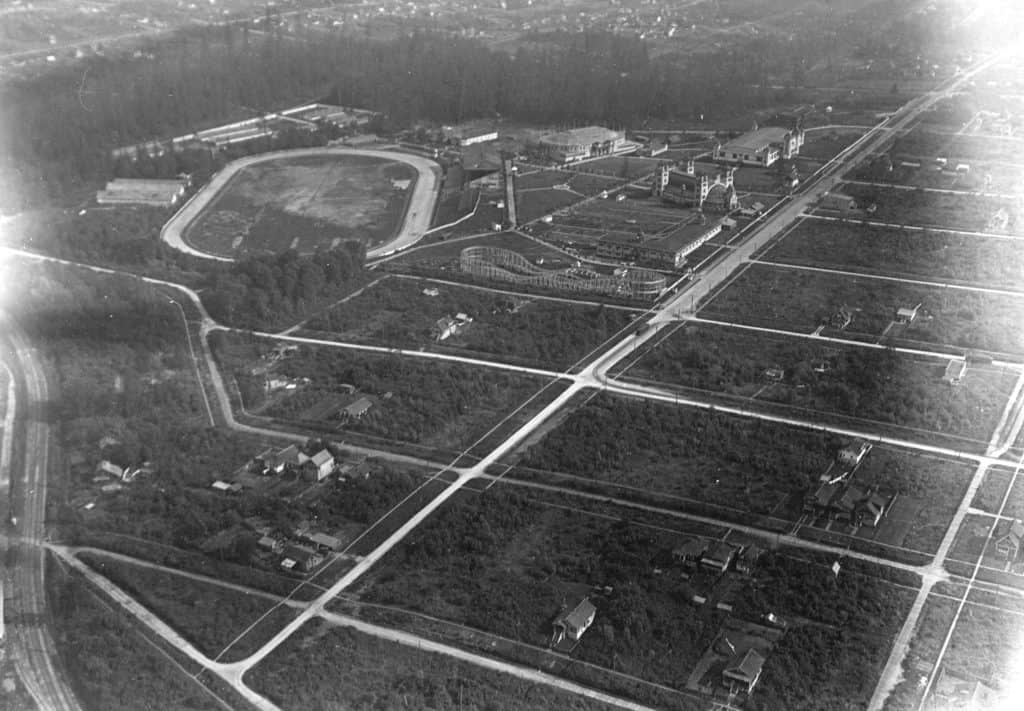 Aerial view from 1919 of the northern section of Hastings Park, the roller coaster, the Manufacturing/Industrial Building and the Exhibition Building on the Exhibition Grounds. CVA 1123-1, photographer Stuart Thomson. 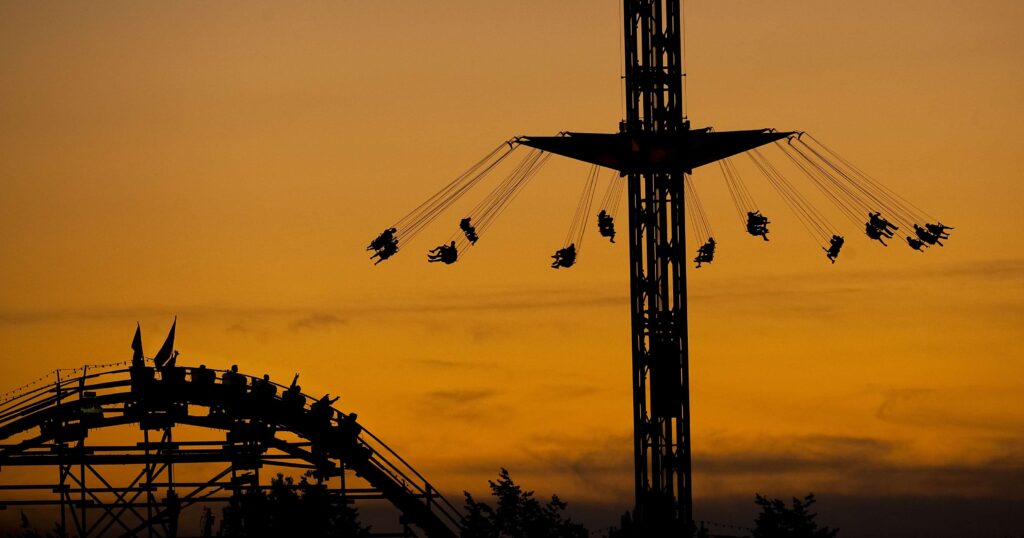 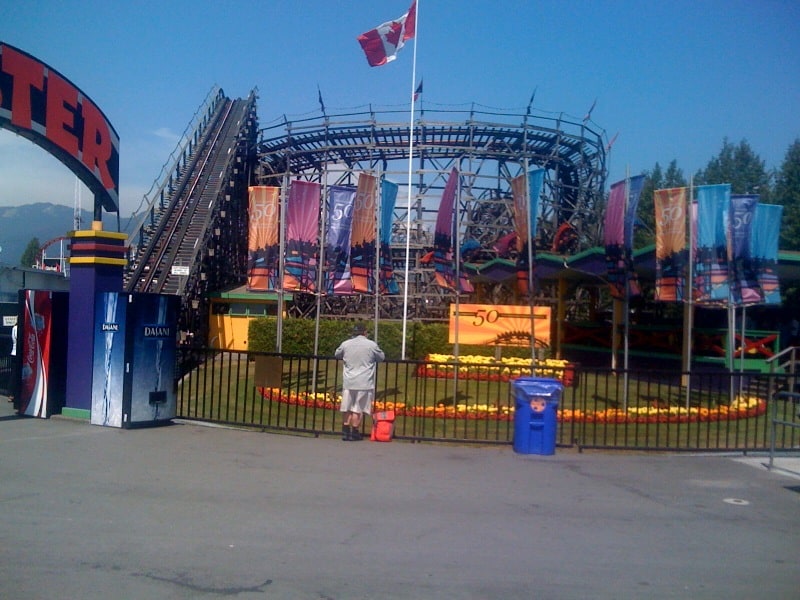 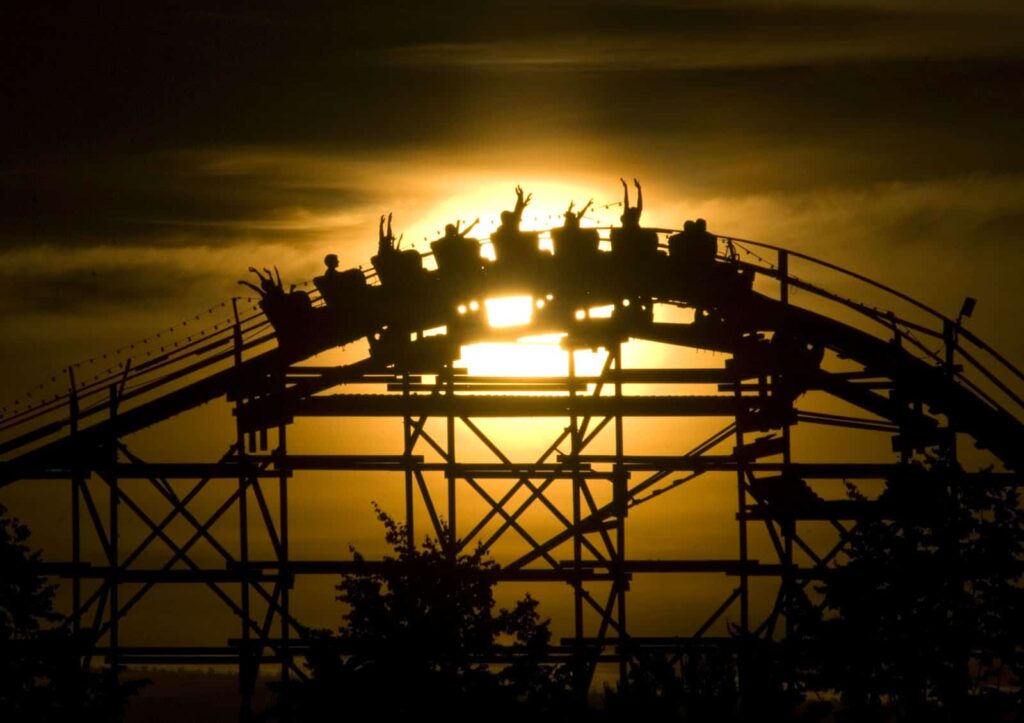 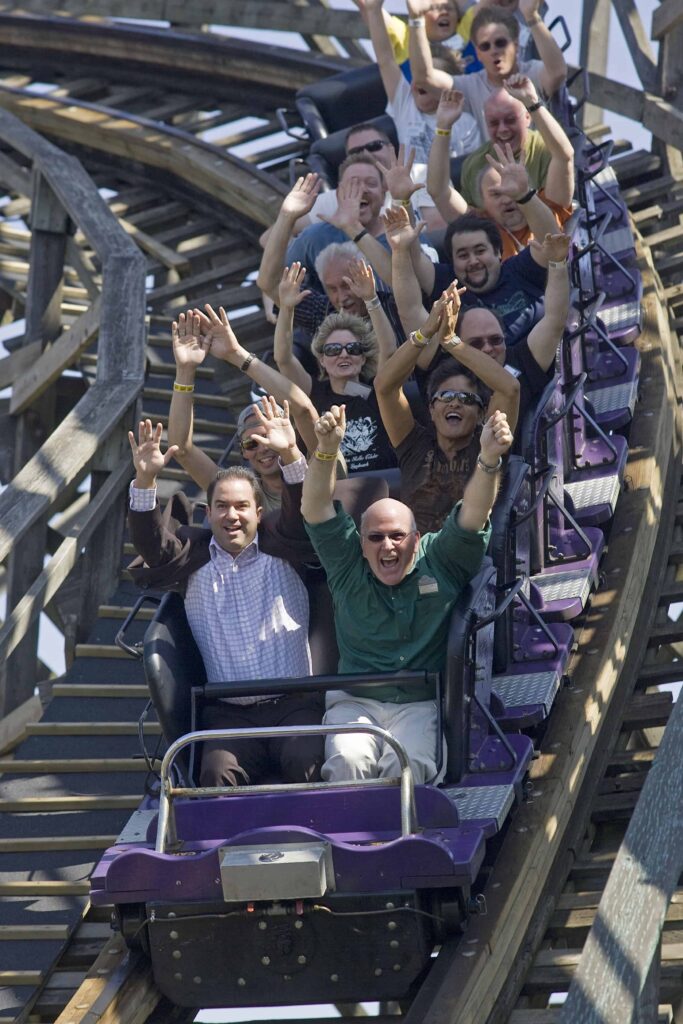 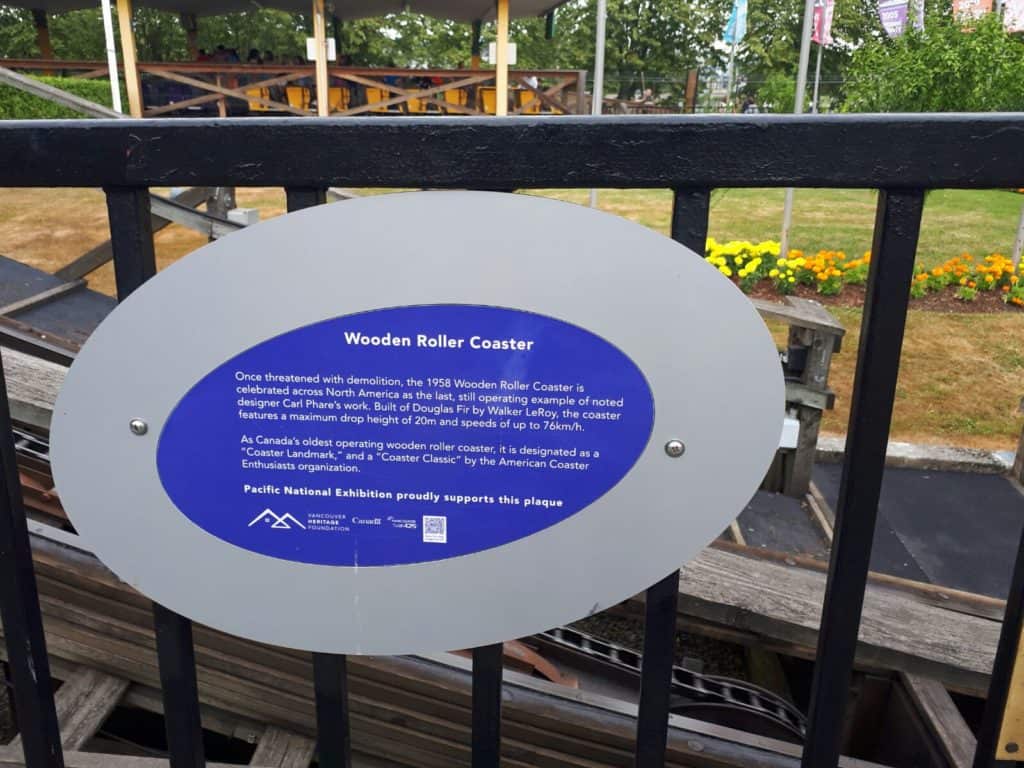 The VHF "Places That Matter" plaque on the fence beside the Coaster. Photo Credit: PNE.

Cars at the top of the Giant Dipper roller coaster at the Pacific National Exhibition midway at Hastings Park in 1936. CVA 260-500, photographer James Crookall.

Aerial view from 1919 of the northern section of Hastings Park, the roller coaster, the Manufacturing/Industrial Building and the Exhibition Building on the Exhibition Grounds. CVA 1123-1, photographer Stuart Thomson.

The VHF "Places That Matter" plaque on the fence beside the Coaster. Photo Credit: PNE.