One of Vancouver’s most popular tourist attractions, the VanDusen Botanical Garden is a beautiful spot catering to families and flora fanatics.

From 1911 until the 1960s, this site was owned by Canadian Pacific Railway and leased by the Shaughnessy Heights Golf Club. When the golf club moved to a new location, residents initiated a public campaign to create a botanical garden. The land was purchased with Provincial and City of Vancouver funding, along with a donation from W. J. VanDusen, after whom the Garden is named.

Development started in 1971 and VanDusen Botanical Garden officially opened to the public on August 30, 1975. Landscape development was under the direction of W. C. Livingstone. Curator Roy Forster managed the Garden and was responsible for much of the planting design from 1977 to 1996.

From Golf Course to Garden
Opened in 1975, the VanDusen Botanical Garden was built on the former Shaughnessy Golf Course. The private golf club had opened in 1912 on a 50-year lease from the Canadian Pacific Railway. Following the golf course’s relocation to Musqueam lands in 1960, a 25-acre parcel east of Oak soon became the site of Eric Hamber School, while a section from 37th to 41st Avenue became a housing and care-home site. By 1965, the Park Board had adopted the idea of creating a botanical garden on the 55 acres between 33rd and 37th west of Oak. The Vancouver Botanical Garden Association, created in 1966 by a group of gardening enthusiasts, lent their support to the idea of a garden and lobbied for the creation of what would become the VanDusen Botanical Garden.

Negotiations and Opening
Following lengthy negotiations between city and provincial representatives, the CPR’s real-estate division agreed to sell 55 acres of the former course to the city for $2 million in return for the right to build townhouses on 12 acres. Lumber magnate and Vancouver Foundation founder Whitford Julian VanDusen contributed a $1 million and became the garden’s namesake. After four years of development work under the direction of W.C. Livingstone, the gardens opened to the public on August 30, 1975. Opening-day festivities included music by the Kitsilano Boys Band and tours of the new garden. Ticket prices were $1 for adults and 25 cents for students.

Design
Roy Forster was the garden’s curator from 1977-1996; he oversaw the planting of 12,000 trees, flowers and shrubs representing 3,072 species. During excavation, workers discovered sea shells — evidence that the land had been under the ocean about 12,000 years ago. In 1999, Forster received the Order of Canada in recognition of his work in designing the VanDusen gardens. Of the buildings, Herb Wilson of Underwood, McKinley, Wilson and Smith designed the floral hall and garden pavilion; Paul Merrick of Thompson, Berwick, Pratt and Partners designed the forest centre. The dramatic visitor centre, oriented more toward Oak Street than the earlier buildings, is the work of Peter Busby of Perkins + Will.

Early Botanical Gardens
Essondale (now the Riverview Psychiatric Hospital in Coquitlam) is the site of the earliest botanical garden in Canada, started by “Botany John” Davidson, the provincial botanist. He moved the botanical garden to the new UBC campus in 1916, where it remains to this day.

Today
The VanDusen Botanical Garden continues to be jointly operated by the City of Vancouver Board of Parks and Recreation and the Vancouver Botanical Gardens Association, the city’s charitable not-for-profit partner. An administrative staff is bolstered by approximately 1200 non-gardening volunteers and six full-time gardeners with seasonal interns assisting during the summer. Special features include totem poles, large stone and wooden sculptures, a maze, and a Korean Pavilion, a cypress pond and a seasonal heritage vegetable garden. The Gardens organize some special annual events including the VanDusen Garden Plant Sale and the Festival of Lights in the winter. 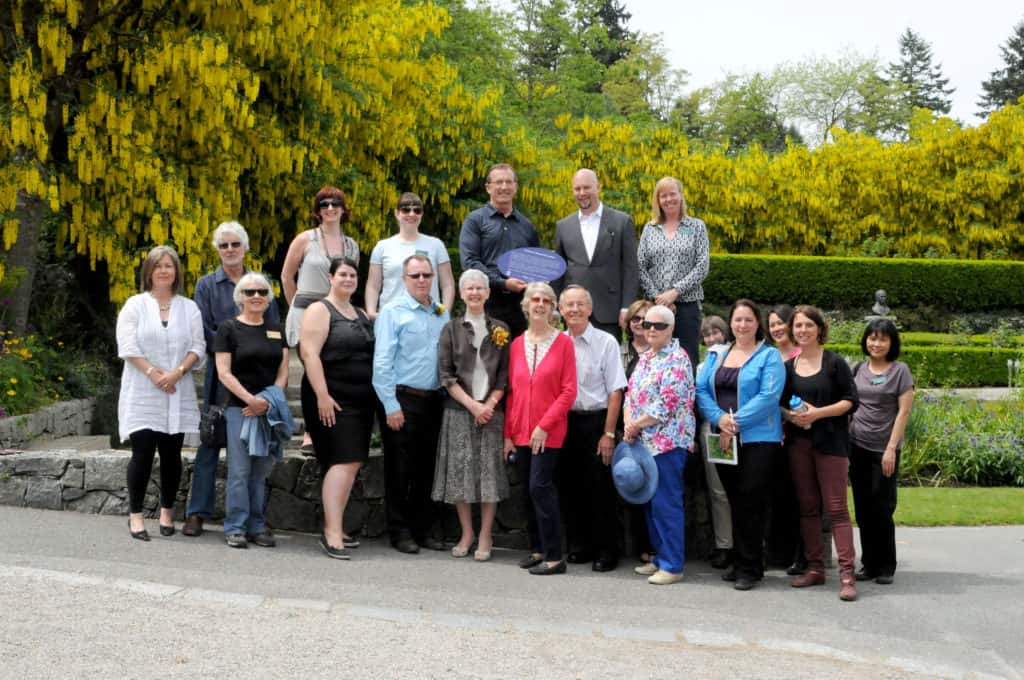 The VHF Places That Matter plaque presentation in 2014. 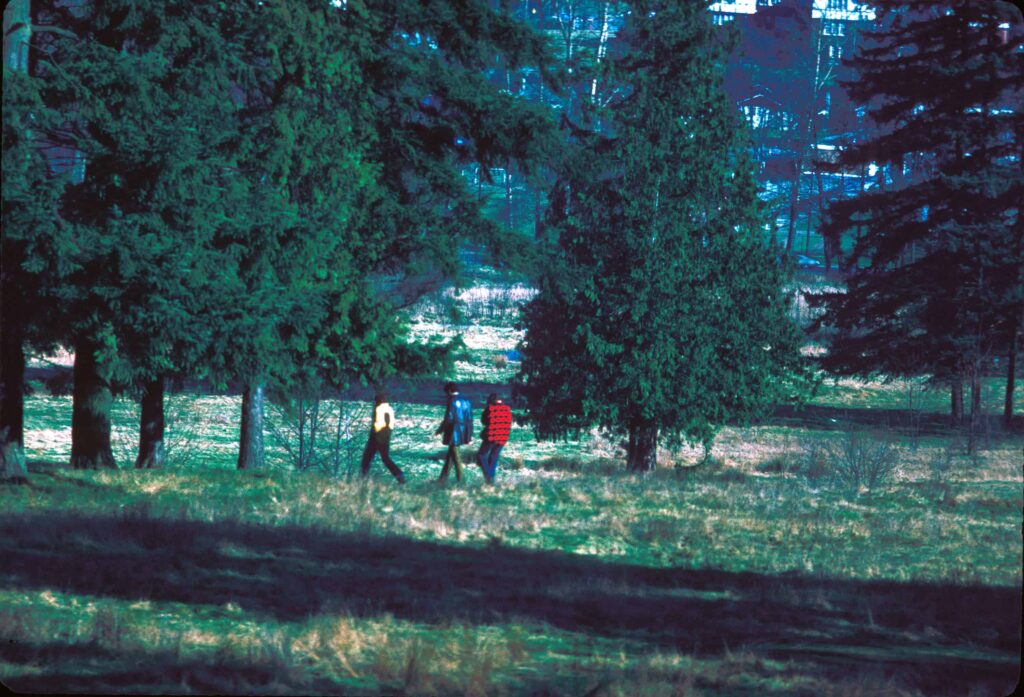 The former Golf Course site in the early 1970s, prior to its reinvention as the VanDusen Botanical Garden. CVA 1502-292. 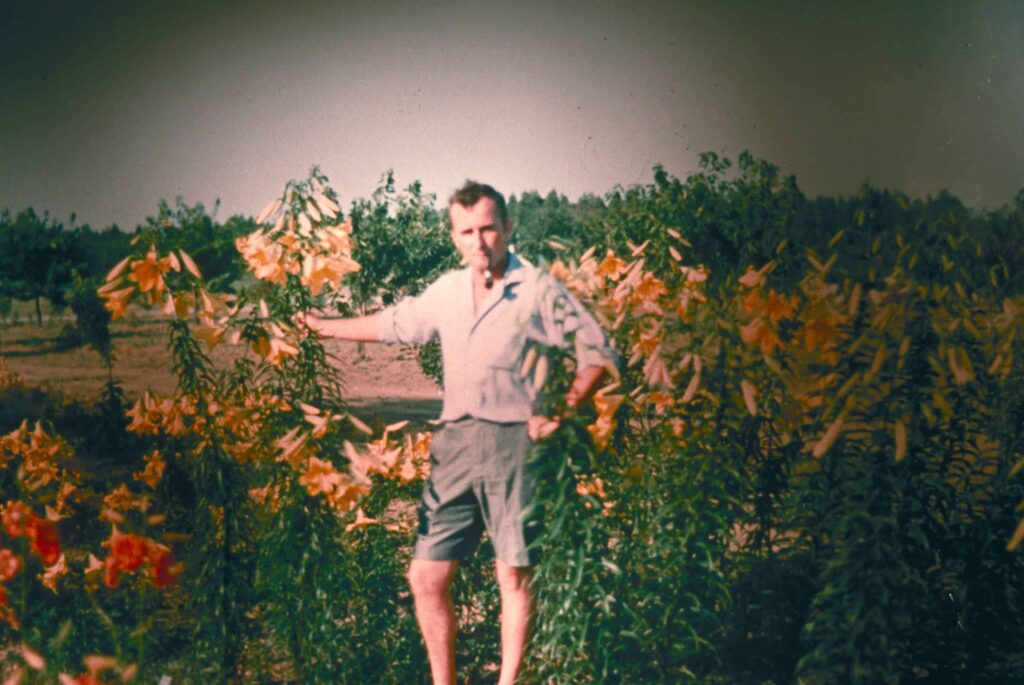 Botanist Roy Forster received the Order of Canada in 1999 for his work in designing the VanDusen Gardens. 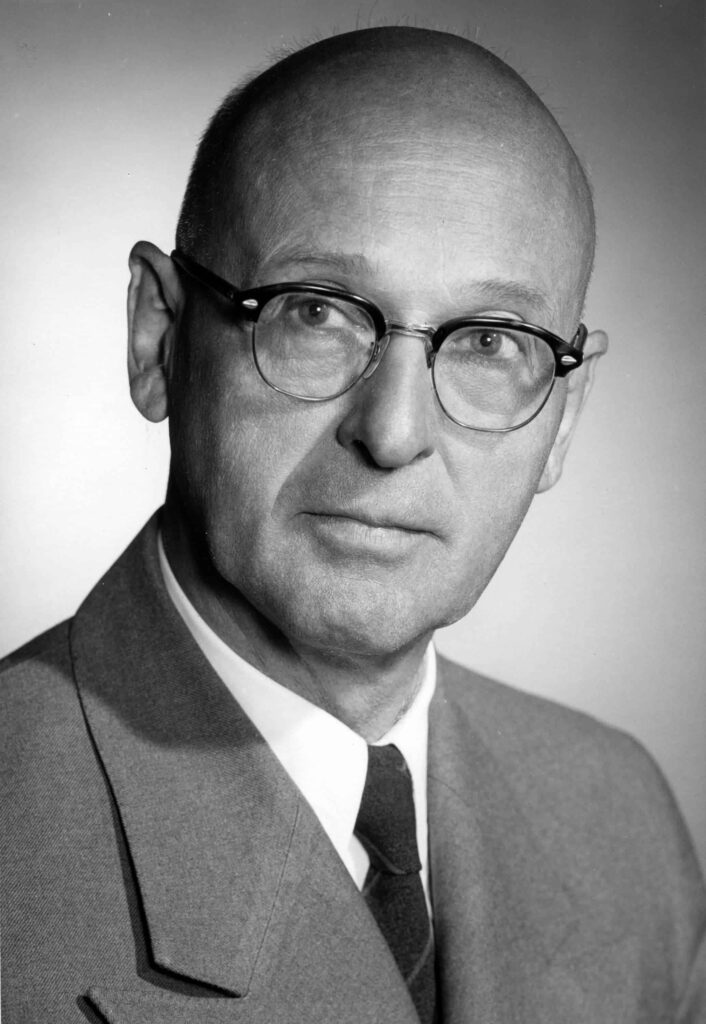 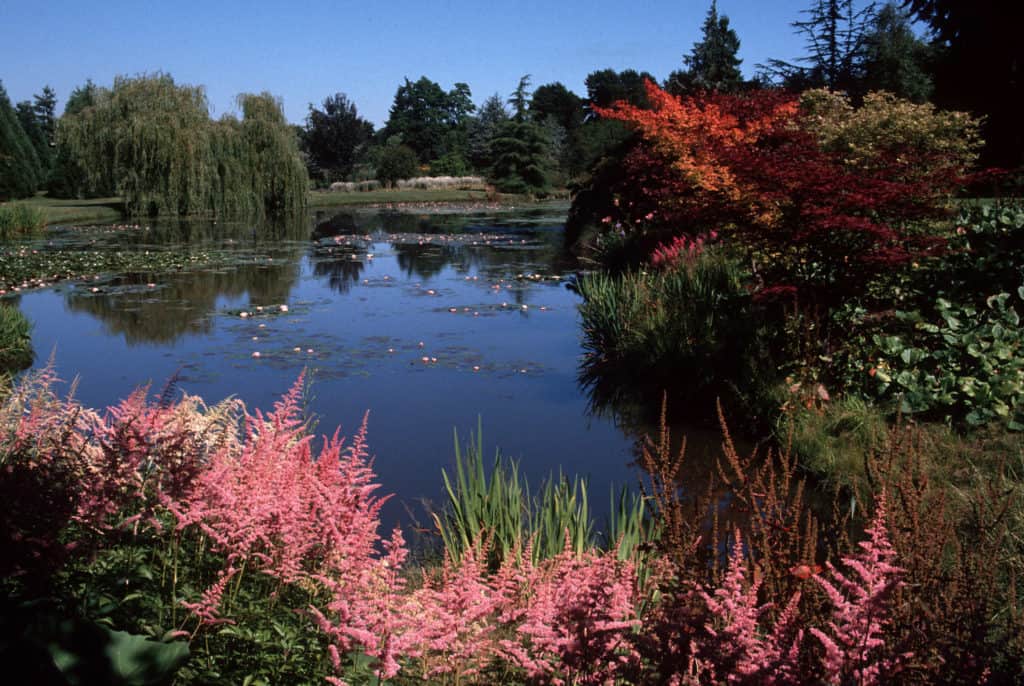 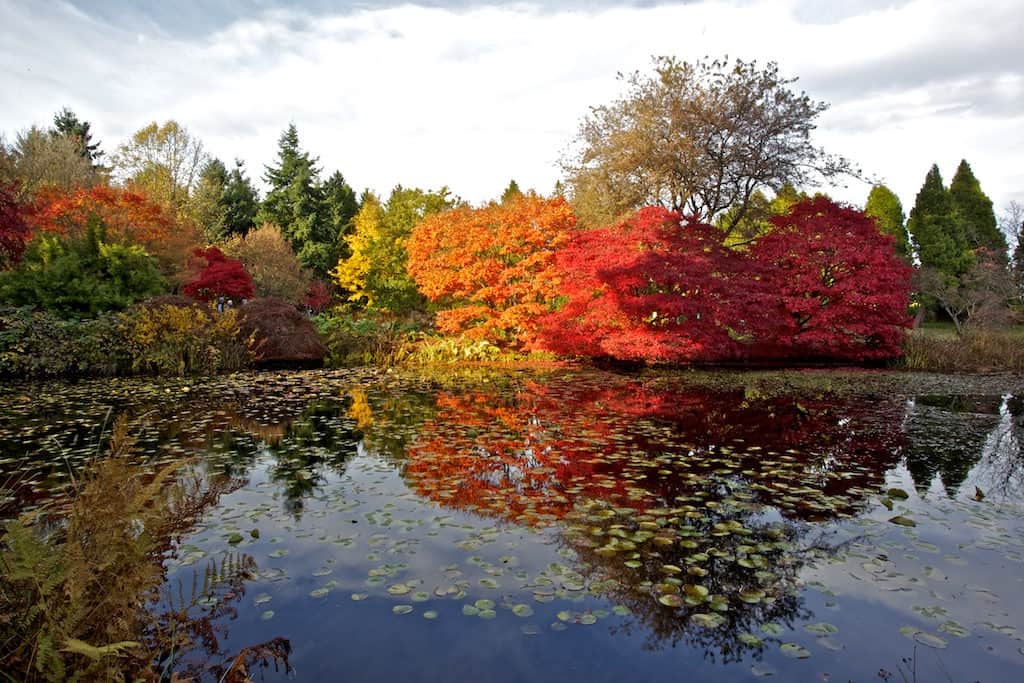 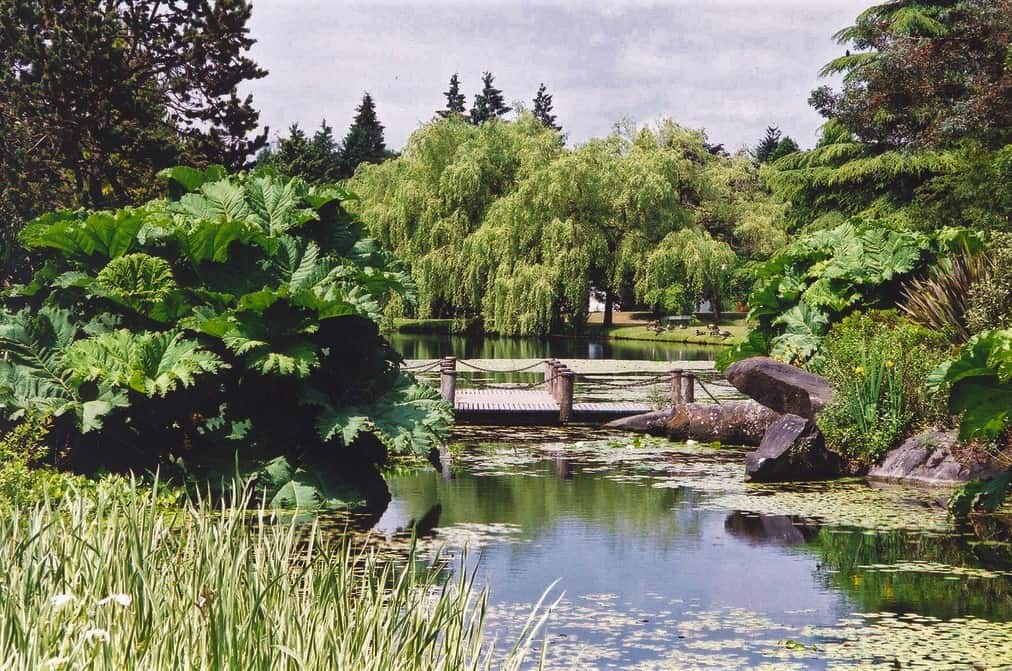 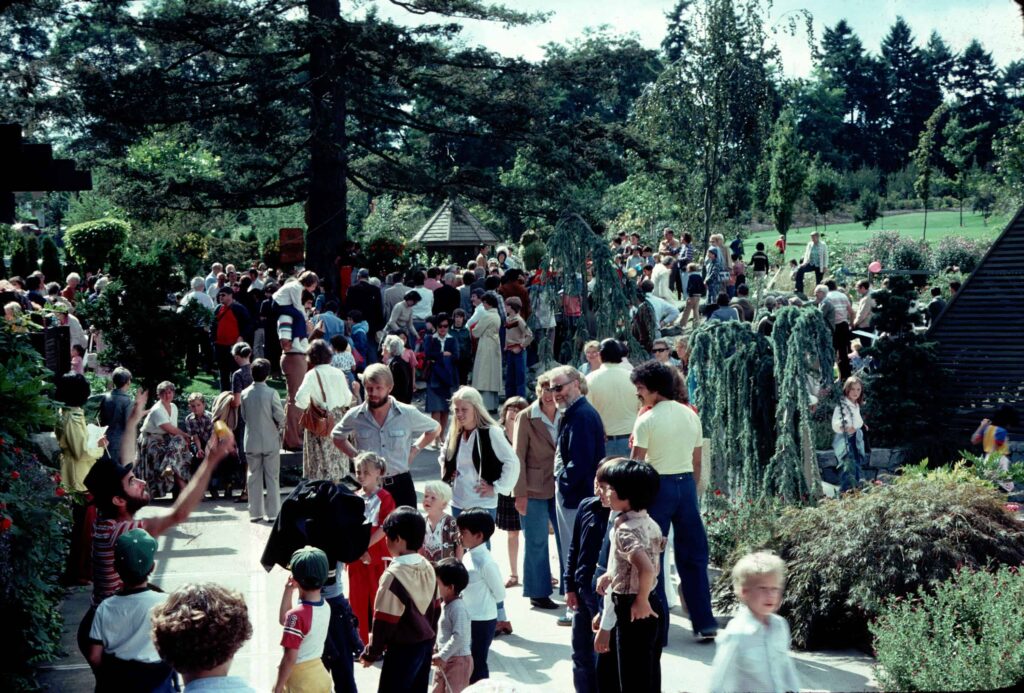 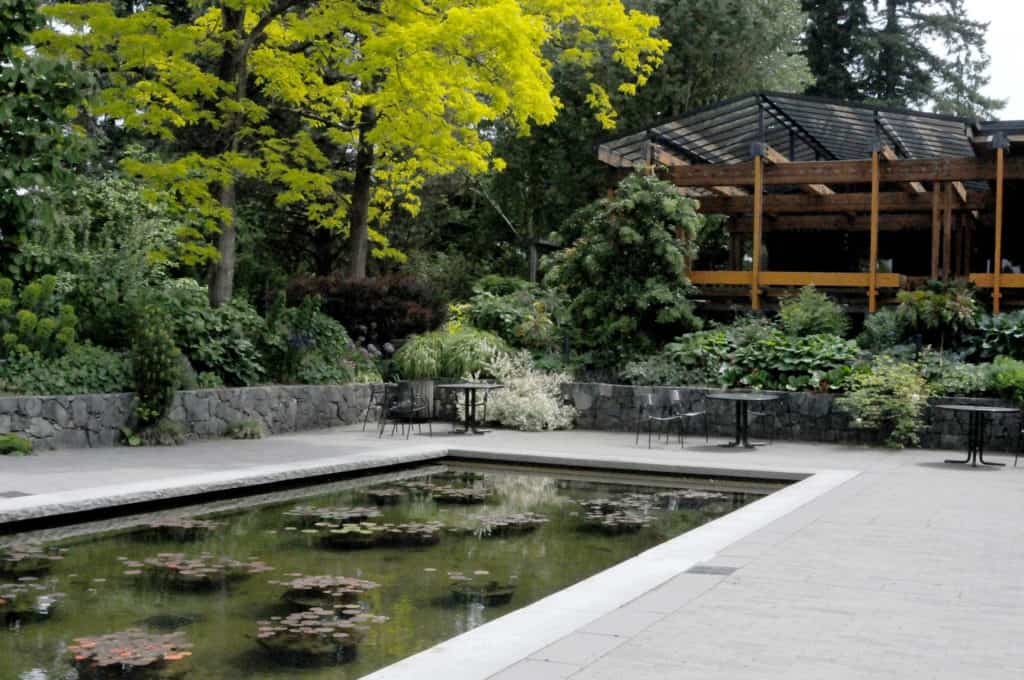 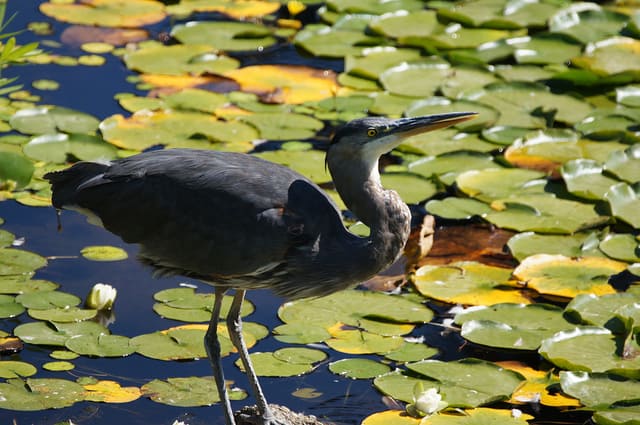 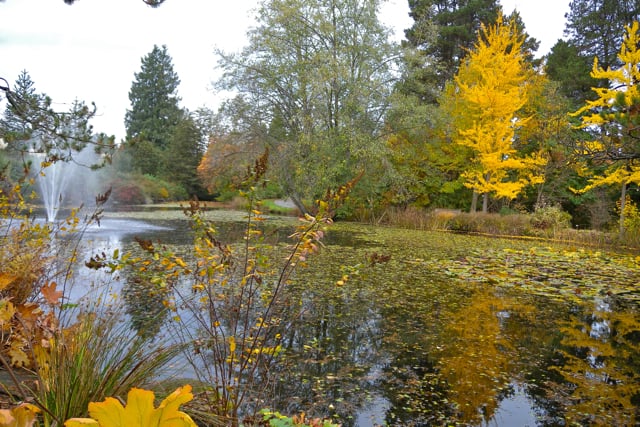 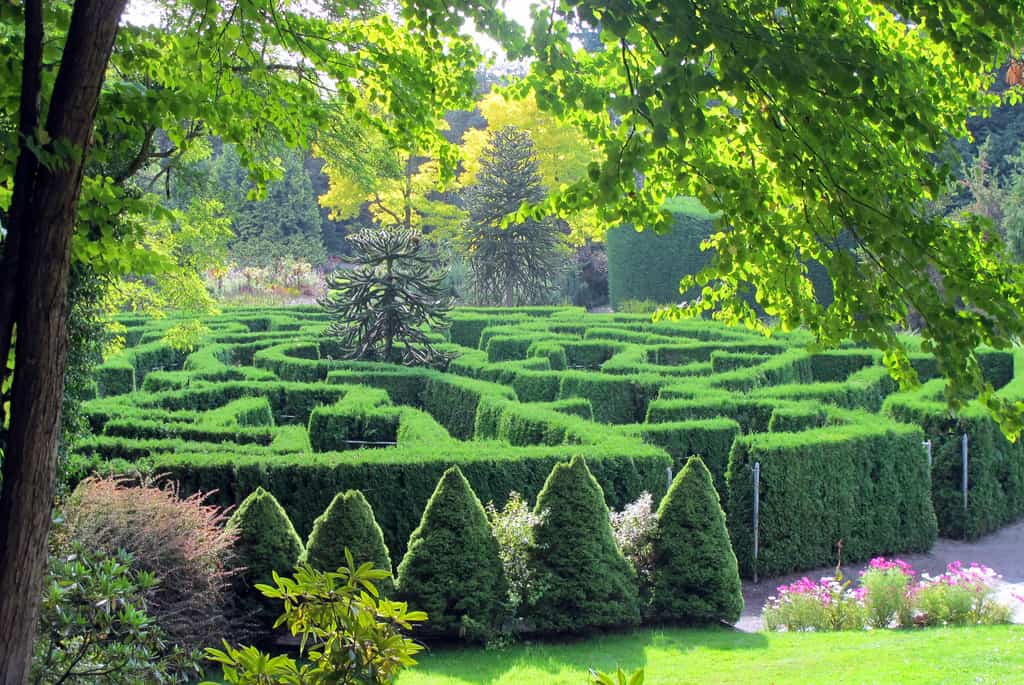 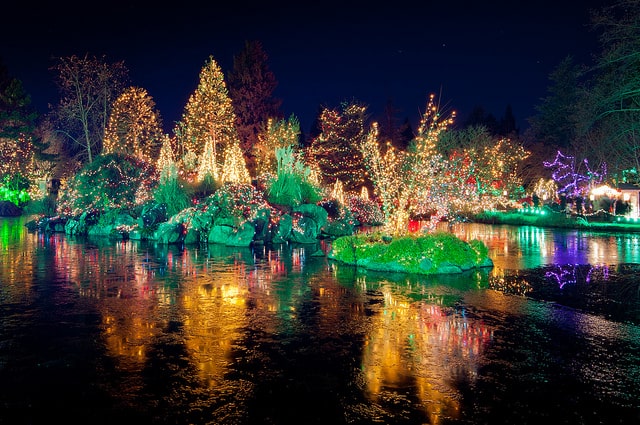 The Festival of Lights at the VanDusen Garden. Photo credit: Janheuninck / Flickr.

The VHF Places That Matter plaque presentation in 2014.

The former Golf Course site in the early 1970s, prior to its reinvention as the VanDusen Botanical Garden. CVA 1502-292.

Botanist Roy Forster received the Order of Canada in 1999 for his work in designing the VanDusen Gardens.

The Festival of Lights at the VanDusen Garden. Photo credit: Janheuninck / Flickr.