"In the Fireside Room of the Vancouver Unitarian Church on Oak Street, the [Don't Make a Wave] committee held an emergency meeting. Light entered the unadorned room from two tall, thin windows in the west wall. Wooden and grey metal chairs had been pulled out, facing a table where Irving Stowe presided. The throng pulsated with anticipation... As the meeting wound down, people drifted into the courtyard of the Unitarian Church grounds, milled around, and talked in small groups. When Stowe left, he flashed the "V" sign, as was his custom, and said, "Peace." Bill Darnell, a quiet ecology activist who rarely spoke at the meetings, said modestly... 'Make it a green peace'."
- Rex Weyler, Greenpeace Gets a Name.

Wolfgang Gerson’s Modernist 1964 design both expresses and reinforces the progressive, liberal religious tradition of Unitarianism whose origins date back to the 16th century. Vancouver’s Unitarian members held their first service in 1909 in a downtown theatre. By 1913 members had built a church at 10th and Granville which served the congregation for over 50 years before the 49th and Oak property was purchased. At a February 1970 meeting held at the Unitarian Church, activists of the “Don’t Make A Wave Committee” renamed itself “Greenpeace”; with this name, the work of the environmental organization Greenpeace began.

The First Fifty Years
Vancouver’s Unitarian Church was founded in 1909 and held its first meeting at the Maple Leaf Theatre on Granville Street. The first regular service was held in the Lester Court building at the corner of Davie and Granville until a church was built near 10th and Granville in 1913. This building was the congregation’s home for the next fifty years. In 1926, the church organized a “free forum” twice a month in which participants discussed a wide variety of subjects.

Wolfgang Gerson’s Modernist Design
Property was purchased at Oak and 49th Avenue where a new church designed by Wolfgang Gerson in 1964 was constructed. The striking composition of sanctuary, Hewitt Centre, and office building – noted for their “simplicity and serenity” – are arranged around a central courtyard. Gerson’s design recalls Frank Lloyd Wright’s Prairie School style and is further enhanced by a detailed interior design that is integrated into the overall design. Art historian Rhodri Windsor Liscombe describes the church as “an excellent example of Modernist design ideals brought to bear on a place of worship” that promotes “inclusiveness rather than exclusiveness”.

According to Wilfred Buttjes in 1964, “Gerson’s design shows the separation of the Unitarian Church from mainstream Christianity and avoided the cliches of traditional church design in this complex for the Unitarian Church of Vancouver. Clad in grey brick and stone and connected by covered arcades, the school and administration buildings are clustered around an open courtyard with the tall chapel to the east on the highest ground. Skylights, clerestory windows, and vertical floor-to-ceiling window bays bring a bright, airy calm to the chapel interior and give the building a luminous quality from the outside. Several expressive churches line this stretch of 49th Avenue and Oak Street, particularly the whale-shaped Unity Church of Today at 5840 Oak”.

The Architect: A German-Jewish Exile
Wolfgang Gerson was born in Hamburg, Germany and educated in England where he earned his degree from the Architectural Association School of Architecture, described as the first modernist school in the UK. Gerson worked in London then emigrated to Canada, settling in Montreal from 1940-47. He was interned in Quebec at camps established to hold refugees and internees during the Second World War.

In 1947 Gerson was hired by the University of Manitoba, in Winnipeg and engaged in an active period of residential design, including his own home. He left to pursue further teaching and practice in Vancouver at the University of British Columbia in 1956, where he taught until 1981. Besides the Unitarian Church of Vancouver, Gerson is also known for his 1958 Gerson House-Sentinel Hill, in West Vancouver, featuring a series of barrel-vaulted forms climbing down the steep mountainside.

Joining the City’s Heritage Register
In 1993, the church along with the BC Electric building became some of the first post-1940s buildings to be added to the City’s heritage register. According to the church, a panel of local architects voted the church one of the city’s most beautiful buildings in 1998. The City of Vancouver proclaimed September 14th as the “Unitarian Church of Vancouver Heritage Campus Day” after a 50th Anniversary celebration in 2014.

“Green Peace” and Social Justice
The environmental organization Greenpeace got its name after a meeting held at Vancouver’s Unitarian Church in 1970. Following an anti-nuclear strategy meeting of the Don’t Make a Wave Committee in the Church’s fireside room, Irving Stowe said “Peace” and ecology activist Bill Darnell replied, “Make it a green peace.”. 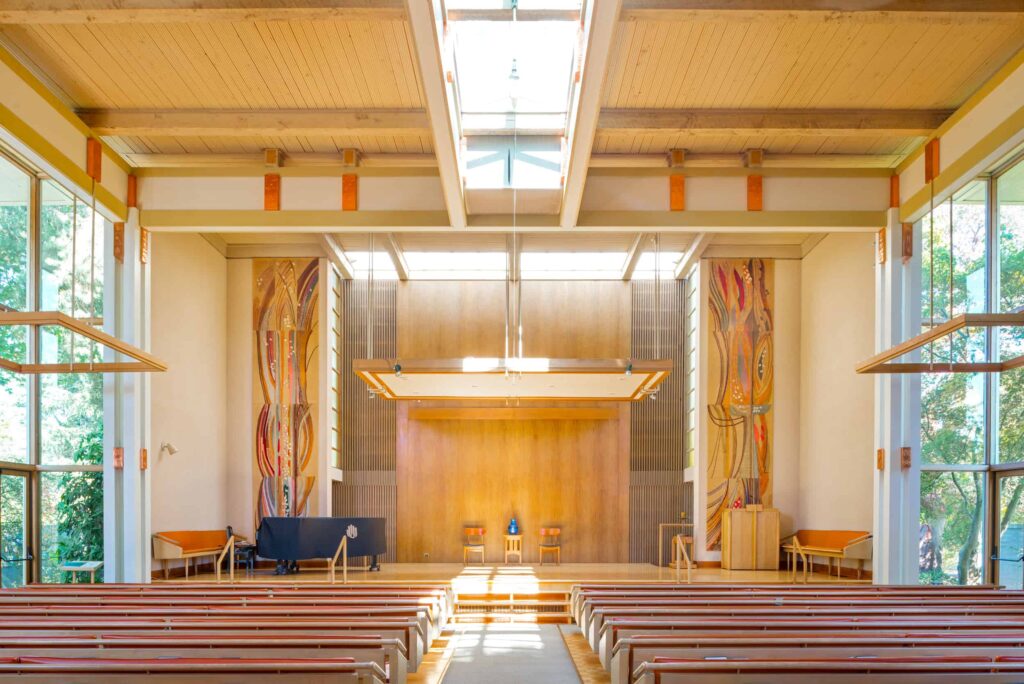 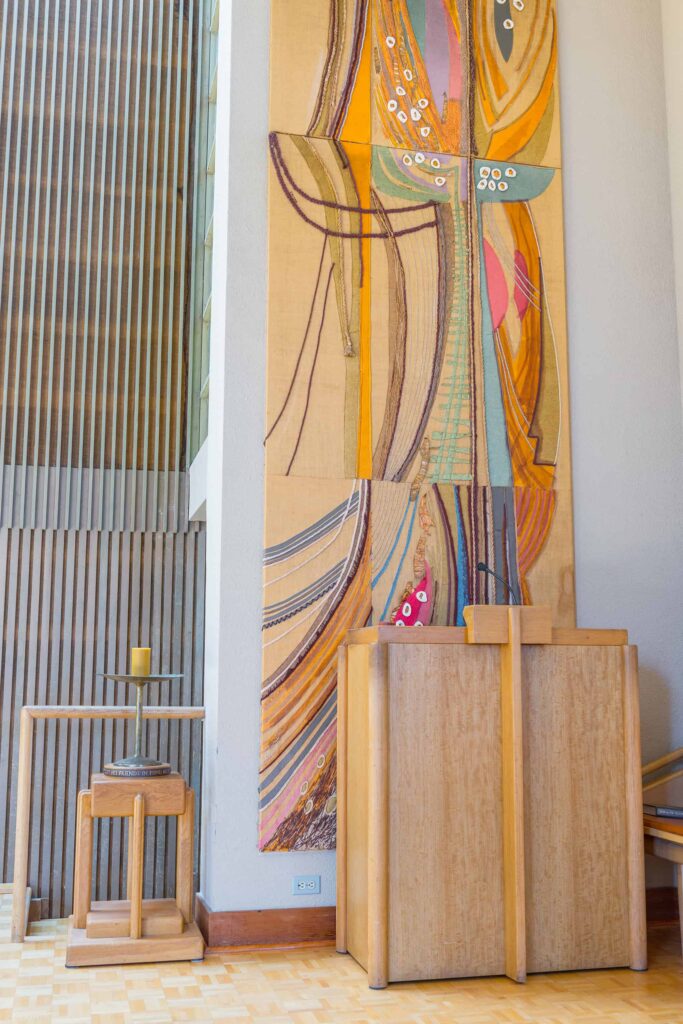 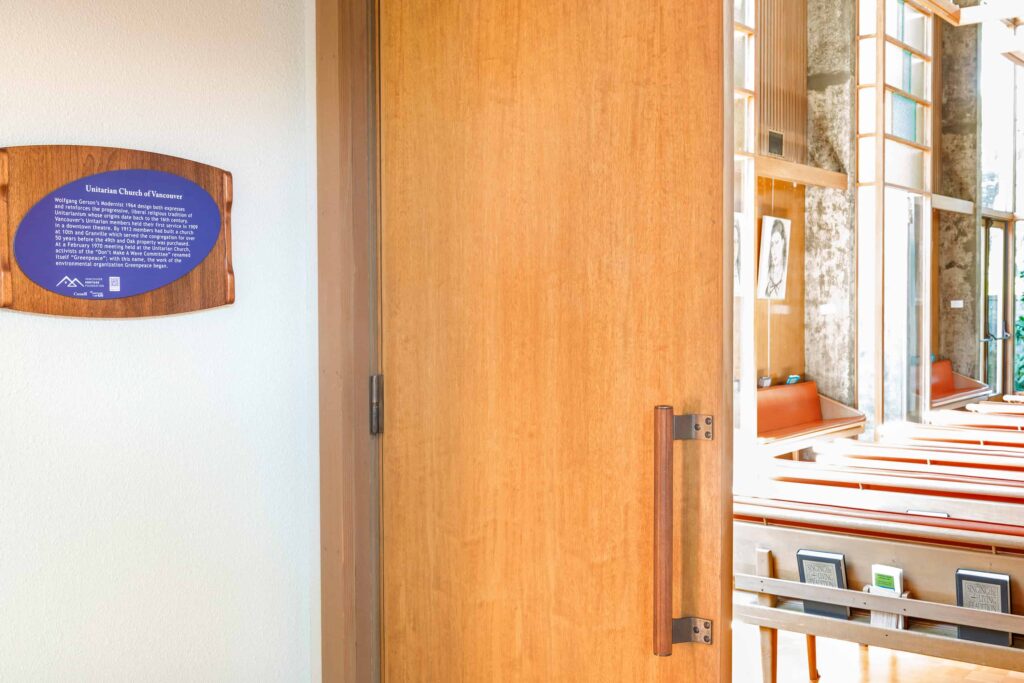 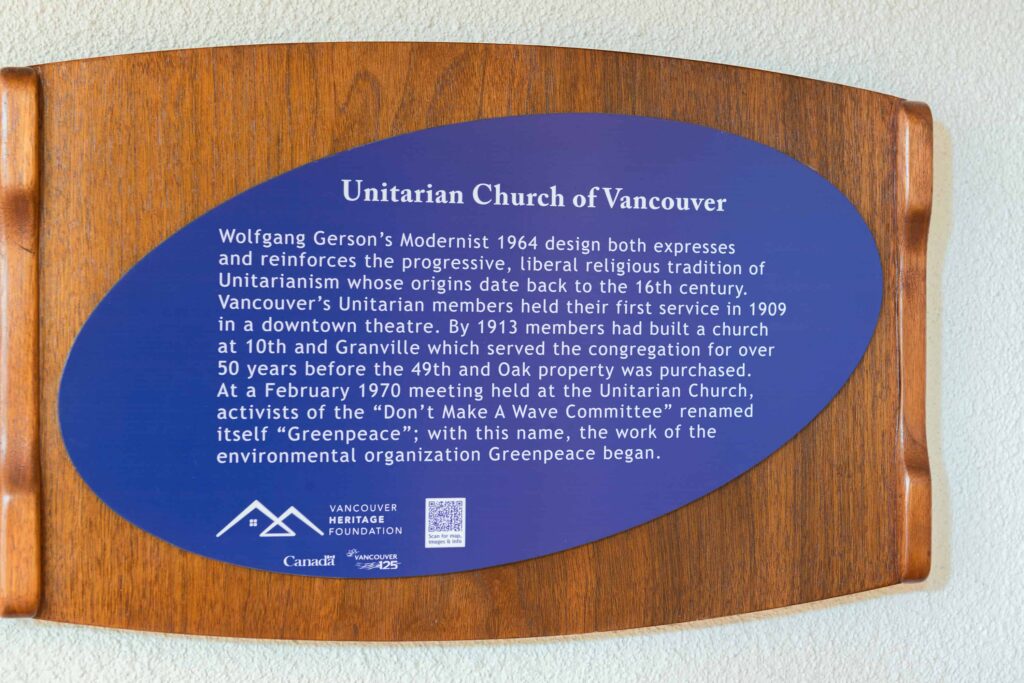 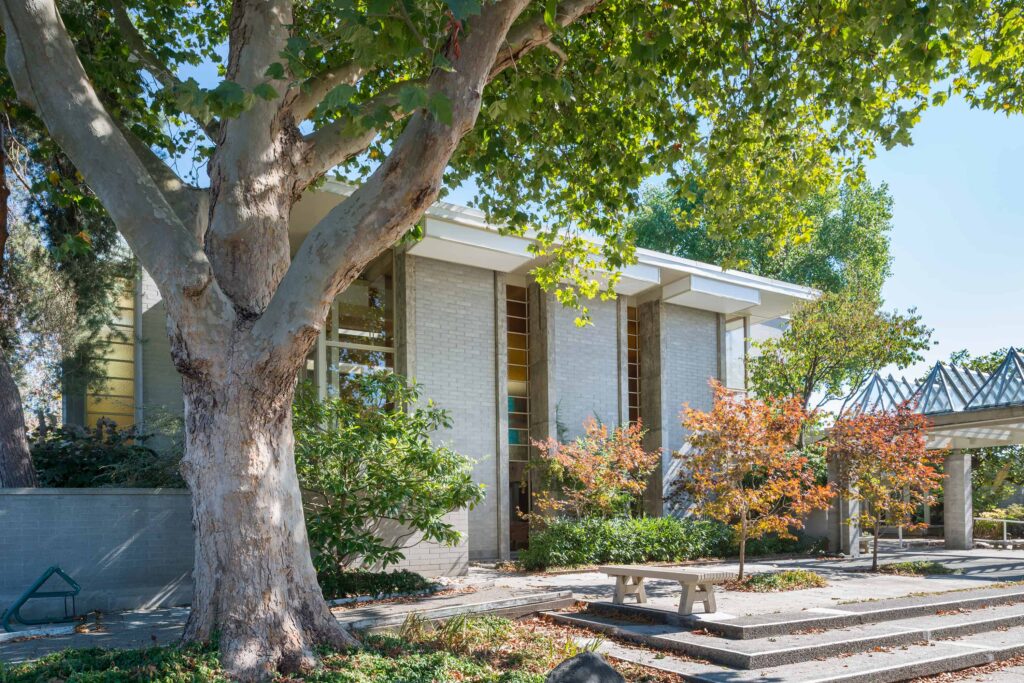 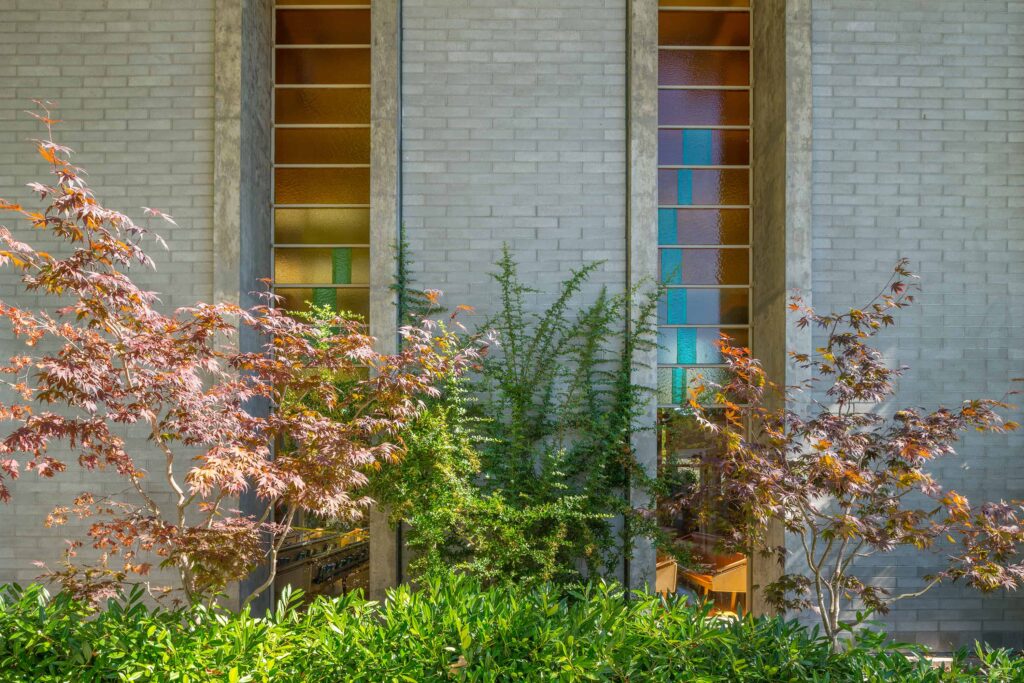 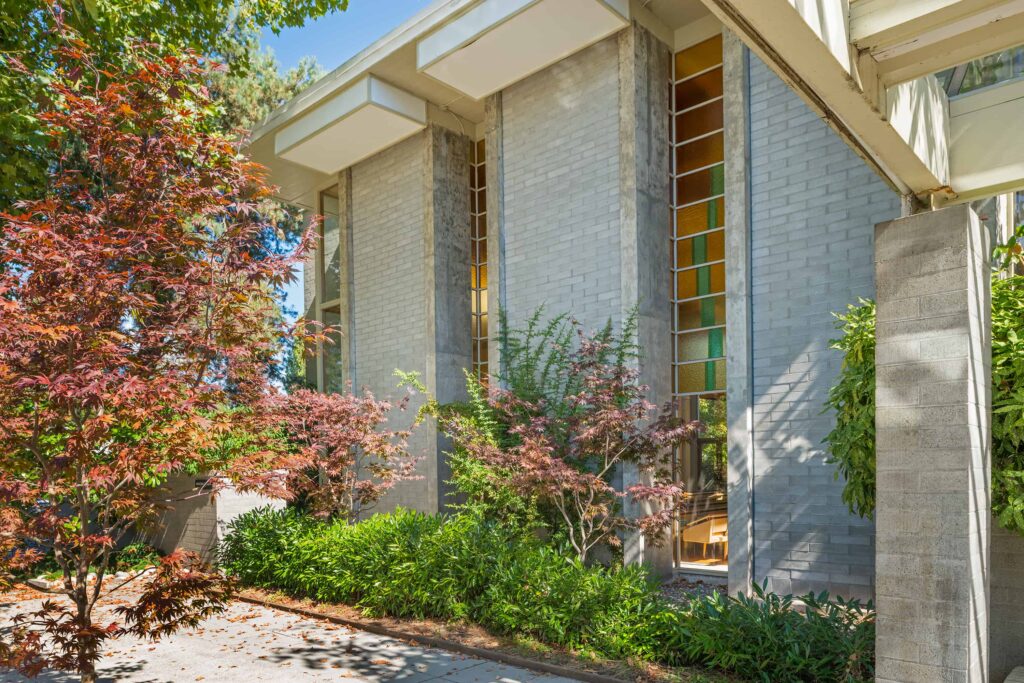 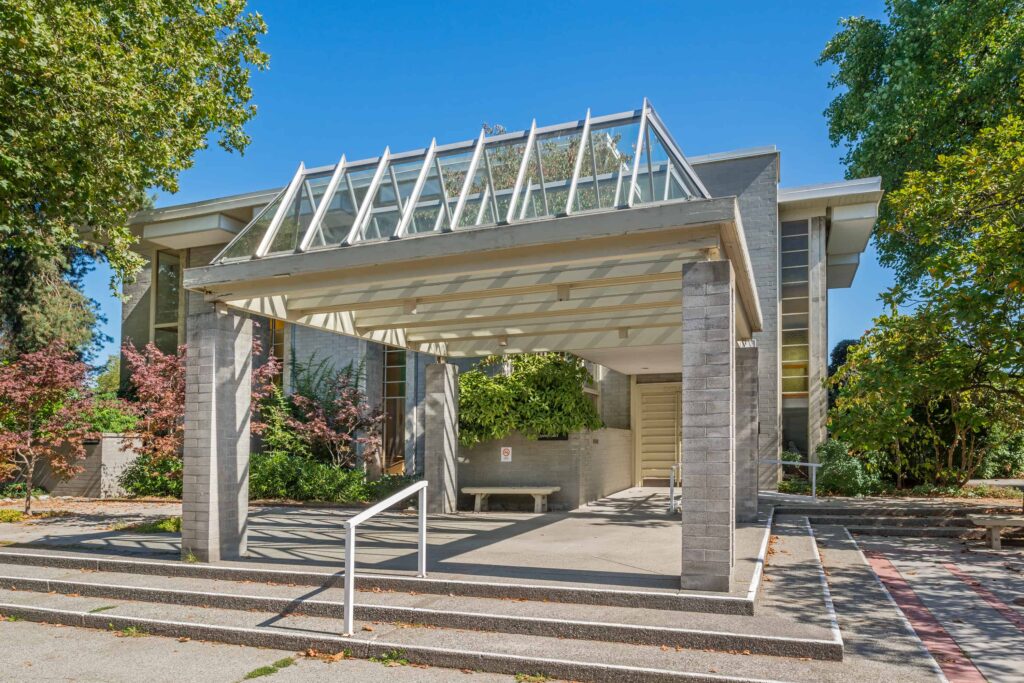 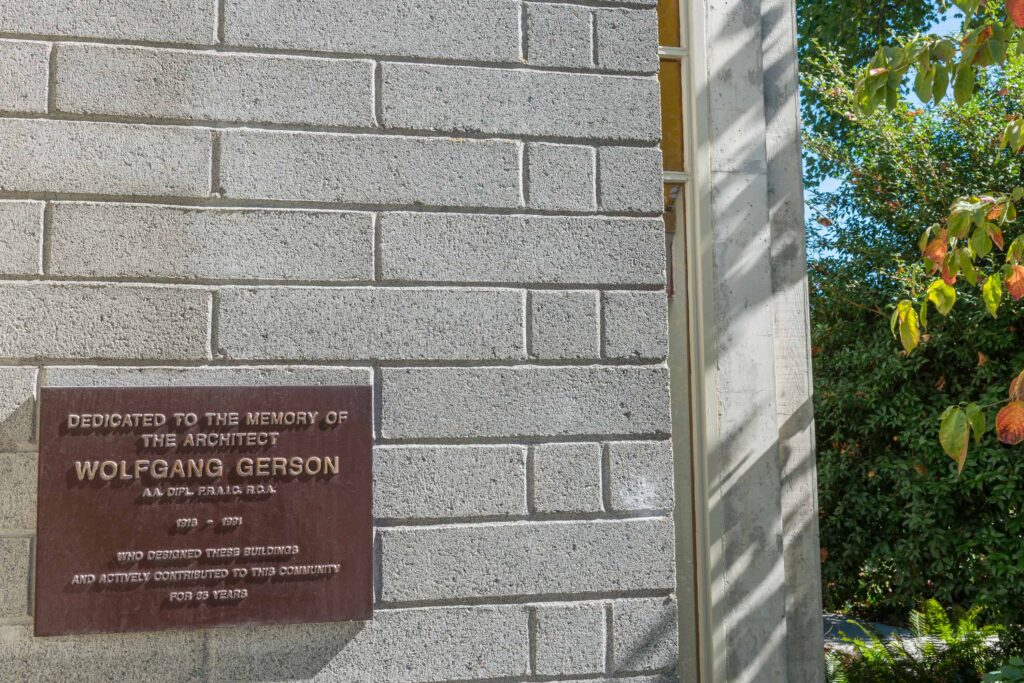 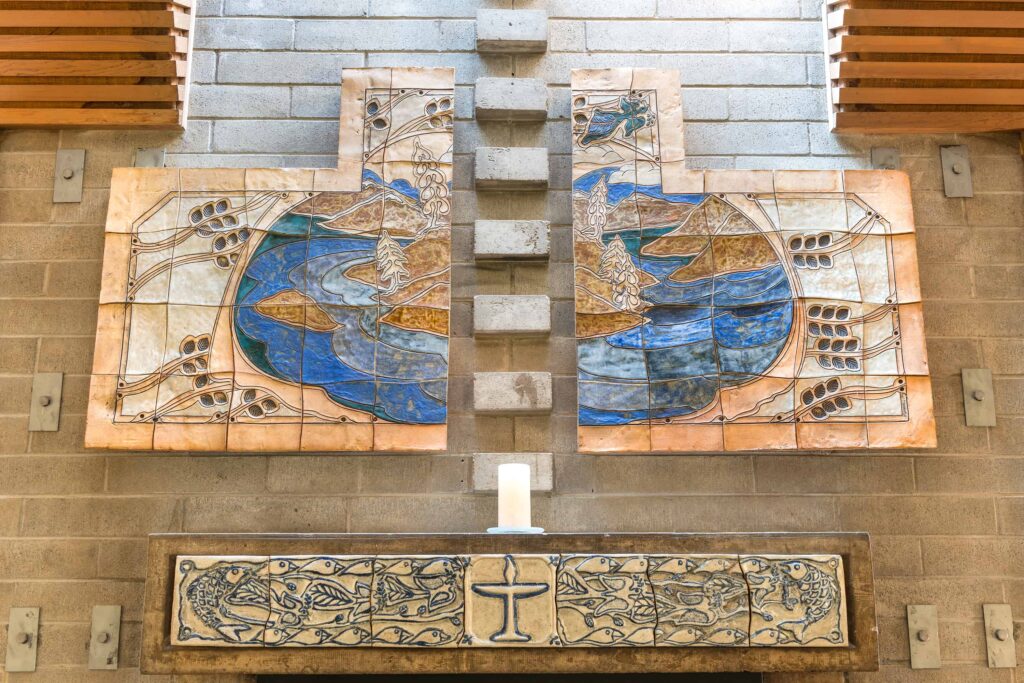 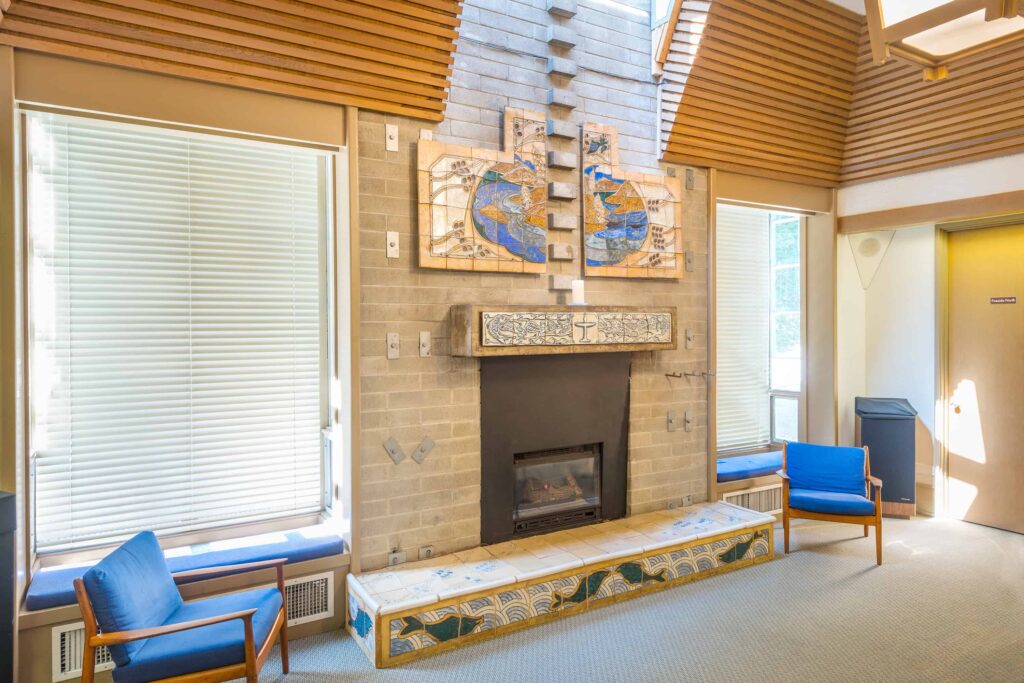 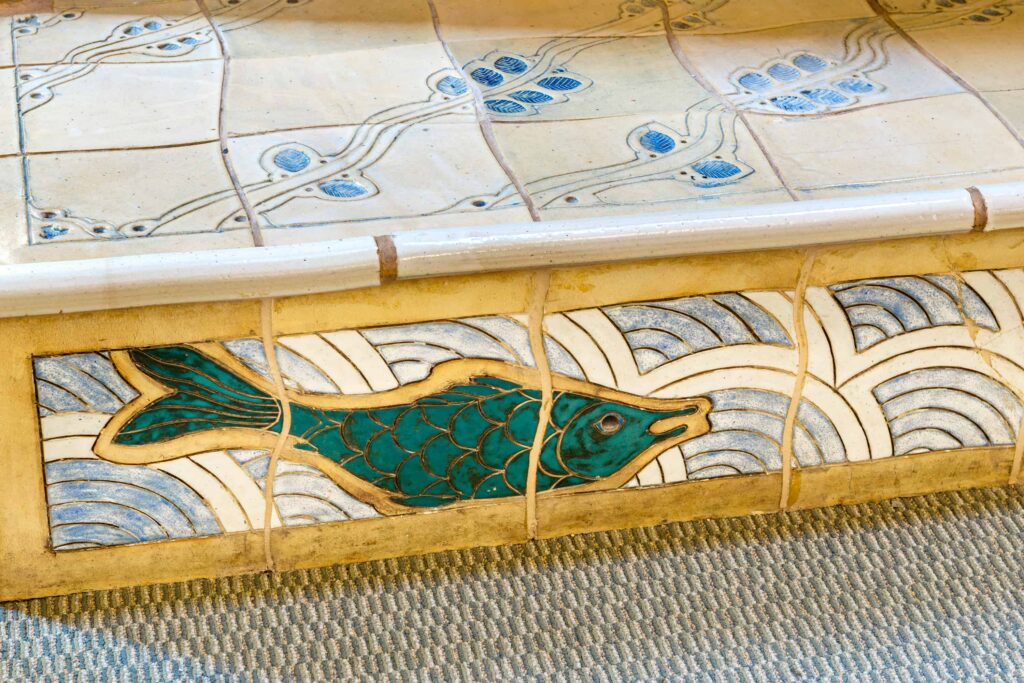 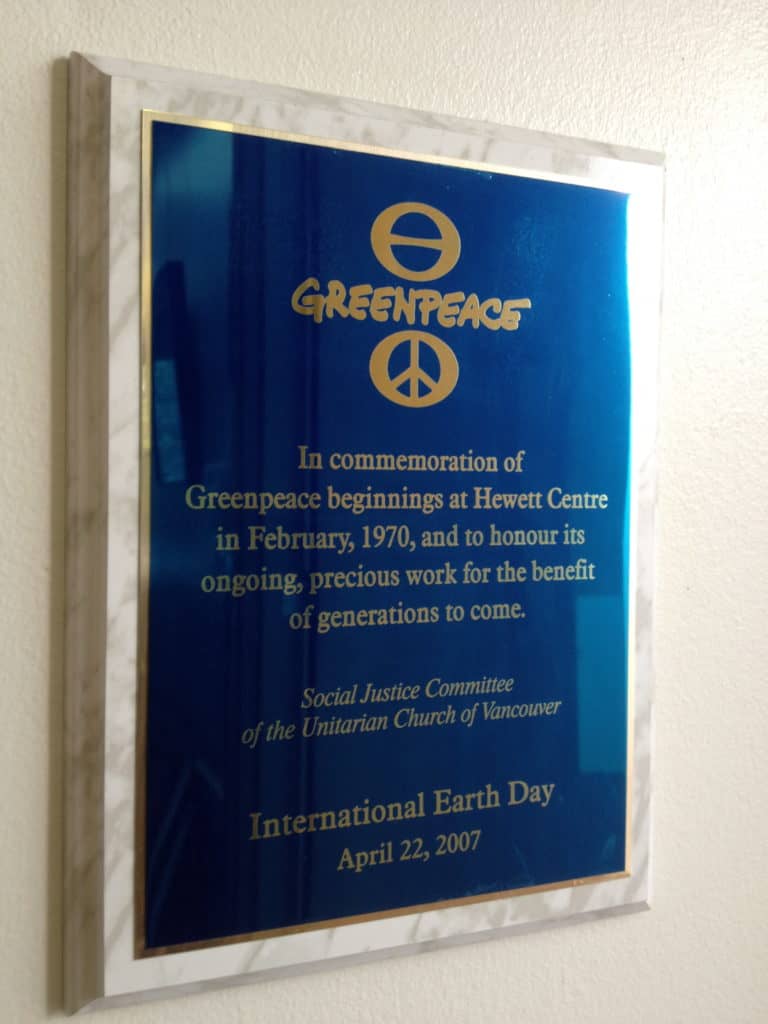 Fireside room, plaque for Greenpeace by the Social Justice Committee of the Unitarian Church. 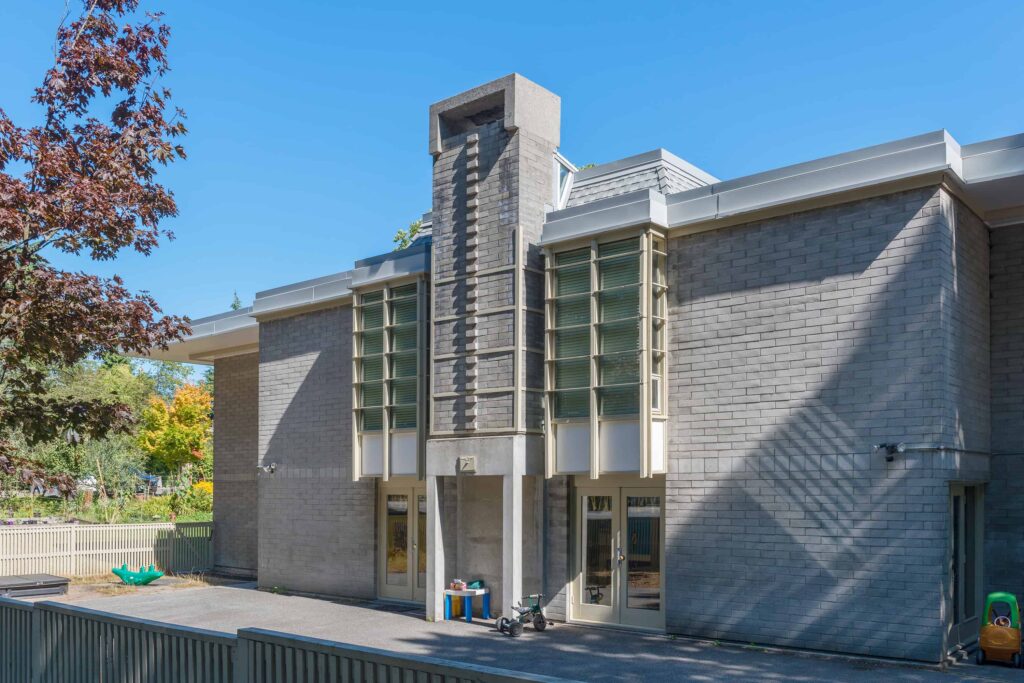 Exterior of the Hewett Centre, west of the sanctuary and offices at the Unitarian Church. Photo credit: Rob Atkins

Fireside room, plaque for Greenpeace by the Social Justice Committee of the Unitarian Church.

Exterior of the Hewett Centre, west of the sanctuary and offices at the Unitarian Church. Photo credit: Rob Atkins