Joy Kogawa, author of the classic 1981 novel, Obasan, spent her early years in this 1912 home. She and her family were evicted from the house in 1942 and sent into internment in the Kootenays, an experience shared by more than 22,000 Canadians of Japanese ancestry. A campaign by the Save the Joy Kogawa House Committee and TLC The Land Conservancy of B.C. succeeded in establishing the house as a writers’ residence in 2006.

History of the Home
Amidst the Vancouver Specials of Marpole, the unassuming Kogawa House gives little hint of its historical significance. A modest home built in 1912 at 1450 West 64th (a block east of Granville Street), it was author Joy Kogawa’s childhood home from which she and her family were evicted after Japan entered the Second World War. The house was built in 1912 for original owner Robert Mackie, a foreman in the public works department of the City of Vancouver. Mackie lived in the house from 1913 to 1937. In 1937, the Nakayama family – consisting of Gordon and Lois, and their two children, five-year-old Timothy and two-year-old Joy – moved into the house. In the 1930s, Marpole, along with Fairview and Powell Street, was known as an area with a burgeoning Japanese population.

The Nakayama family lived in the house from 1937 until mid-1942 when the Government of Canada, under the War Measures Act, forced nearly 22,000 Canadians of Japanese descent out of their homes. The Canadian Government authorized the confiscation of the evacuees’ property, which was auctioned off at a fraction of its value and without the consent of the original owners. The house was sold on September 22, 1944 and Joy’s family was never able to return to their family home. After spending the war years in an internment camp in Slocan City in the Kootenays, they settled in southern Alberta where there was regular work in the sugar beet fields that supplied one of the factories of B.C. Sugar, owned by the Vancouver-based Rogers family.

Obasan
The Marpole house figures prominently in Kogawa’s 1981 novel Obasan, which became the first novel to trace the internment and dispersal of Japanese Canadians from the West Coast during the Second World War. Named one of the Literary Review of Canada’s 100 Most Important Canadian Books, Obasan has become a staple of high school reading lists. In 1986, Joy Kogawa was named a Member of the Order of Canada and in 2008 she was awarded the George Woodcock Lifetime Achievement Award, honouring an outstanding literary career in British Columbia.

Saving the House
On a visit to Vancouver in 2003, Joy was stunned to discover her childhood home was on sale for over $500,000. When it looked like the new owners were set to tear it down, Joy lent her support to a community campaign to buy the house as a writer’s retreat and save it from demolition. The campaign, led by fellow authors and friends, the Save the House Committee, and the Land Conservancy of BC, succeeded in 2006. The house is now managed by the not-for-profit organization Historic Joy Kogawa House Society which operates and preserves the home as a heritage and cultural centre.  The home stands as a physical reminder of the time when 22,000 Canadians of Japanese descent were forcibly removed from their homes and interned under the War Measures Act. The home is also used for author residencies, public events, and tours for school groups and the general public. 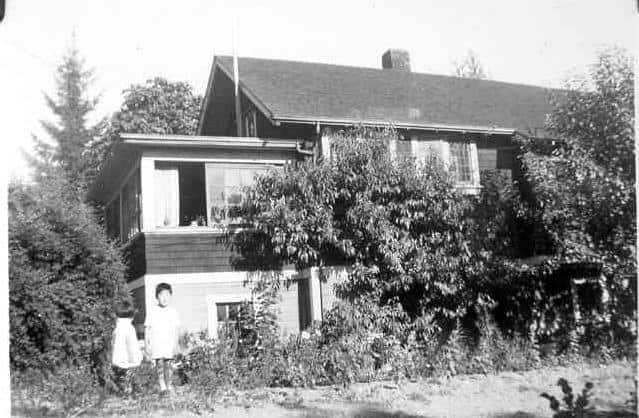 Joy and her brother Timothy at the house, c. 1938. Photo: Courtesy Joy Kogawa. 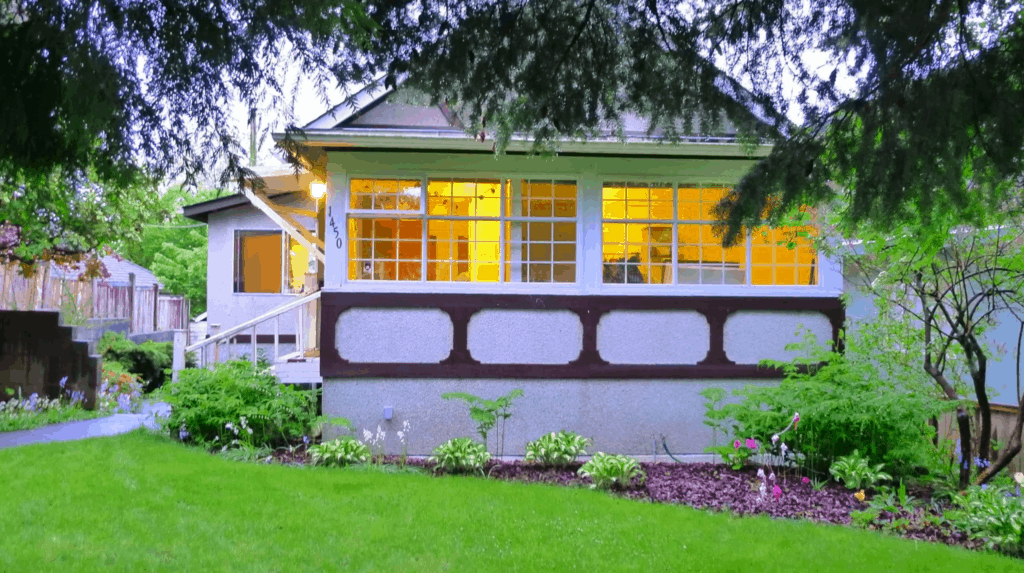 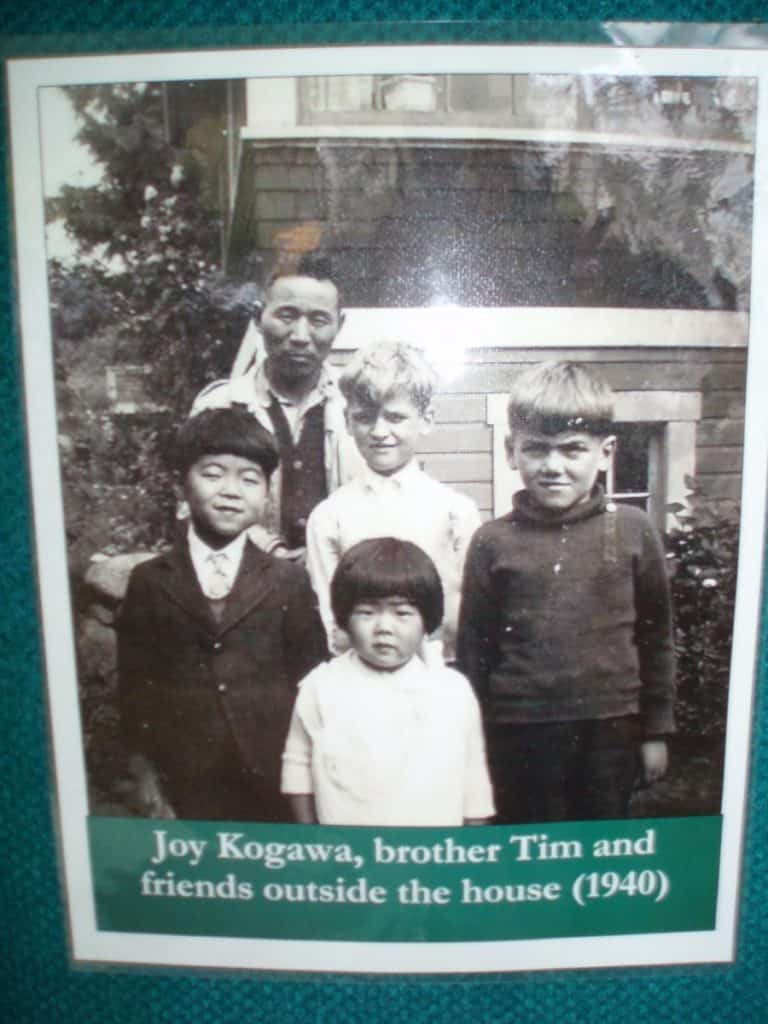 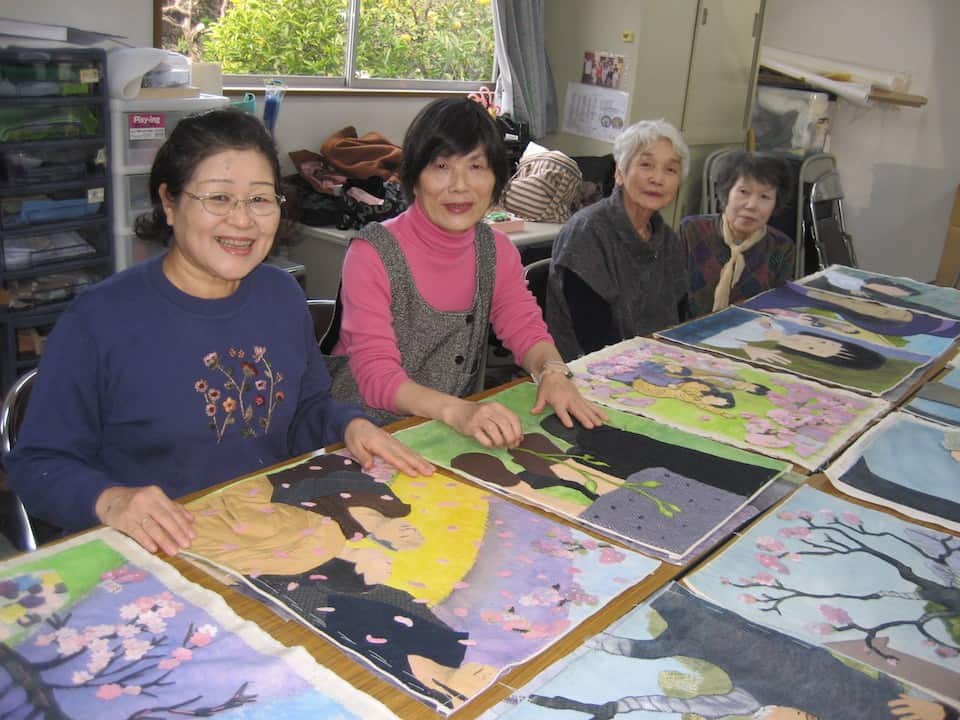 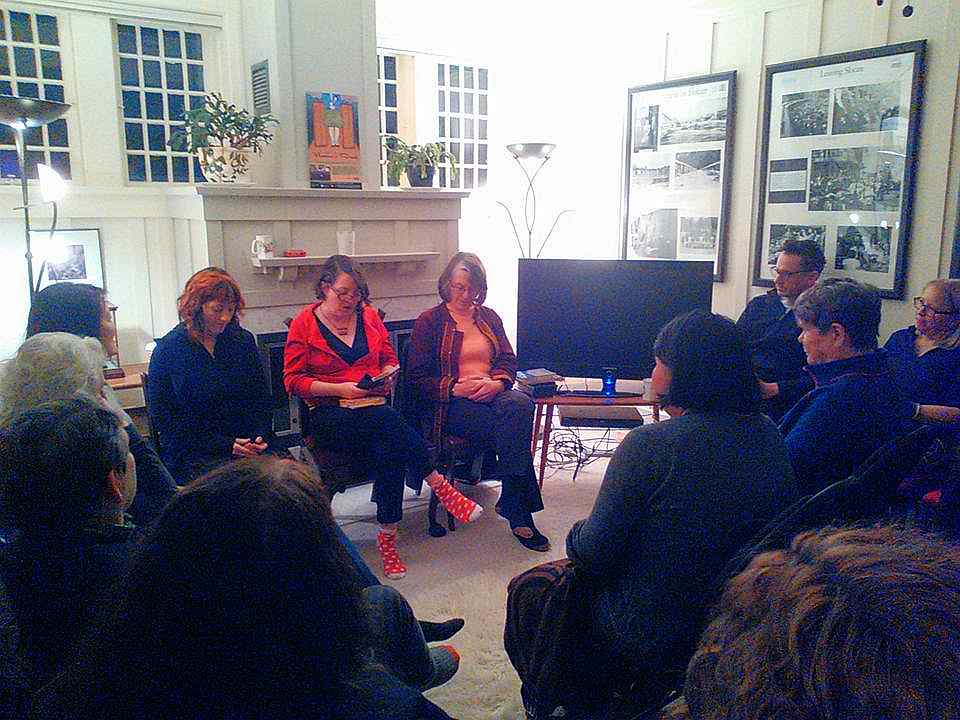 At the Historic Joy Kogawa House, listening to three authors: Christine Lowther, Sonja Larsen, Kate Braid, during an afternoon of readings from their memoirs: Red Star Tattoo, Journeywoman, and Born Out of This, November 2016. Photo credit: Jacqueline Carmichael. 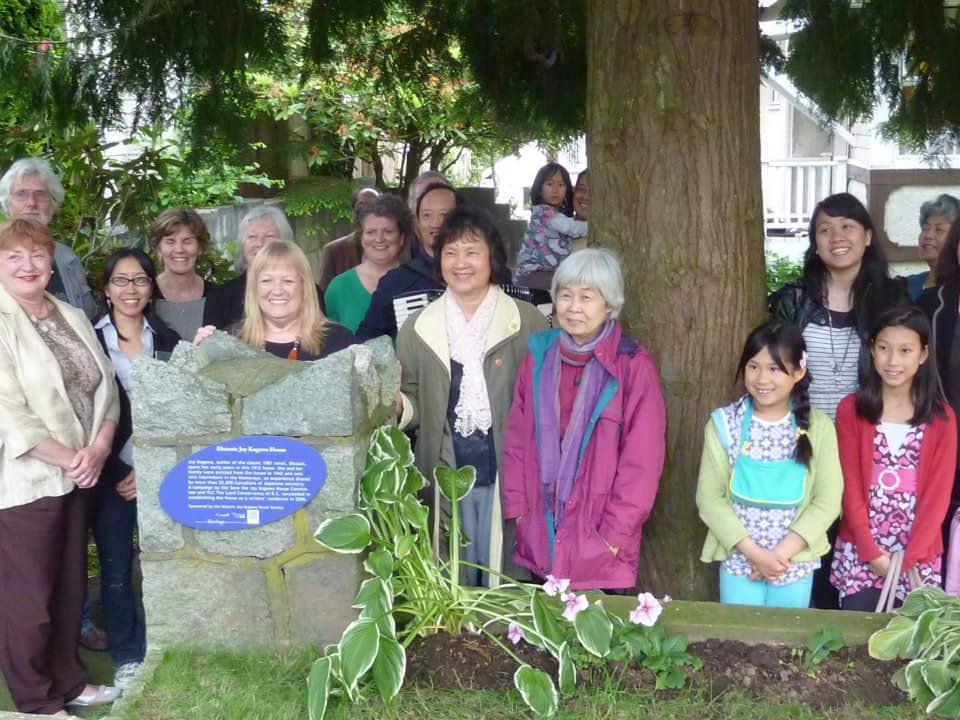 Photo by Thekla of the plaque presentation 2012. 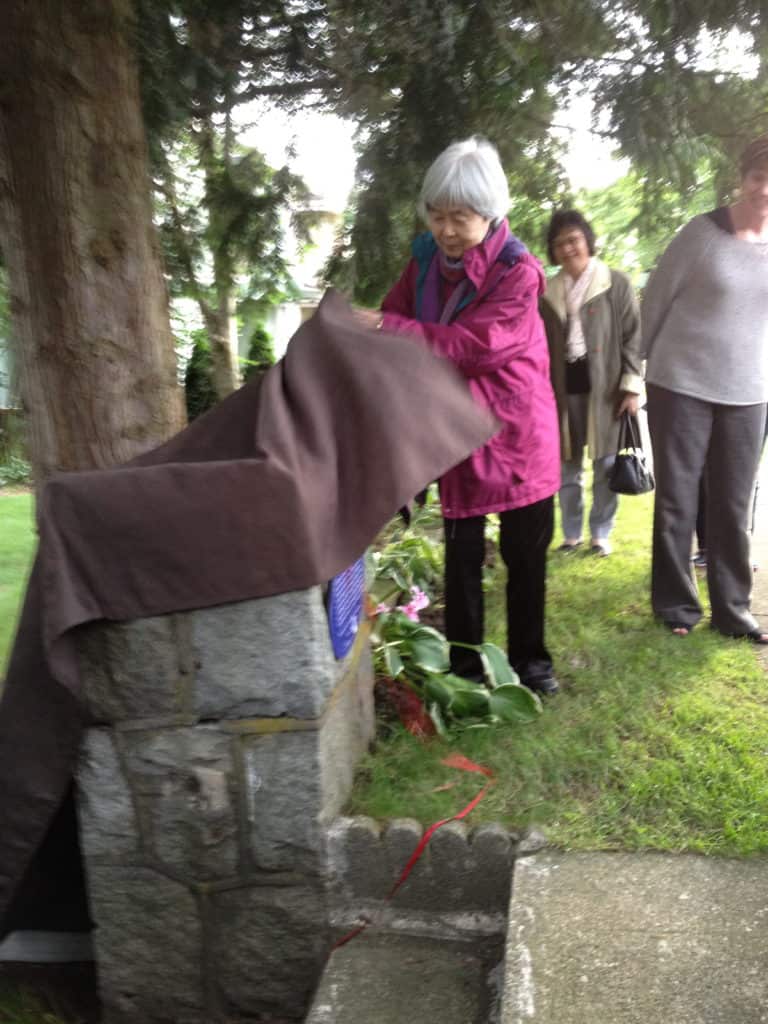 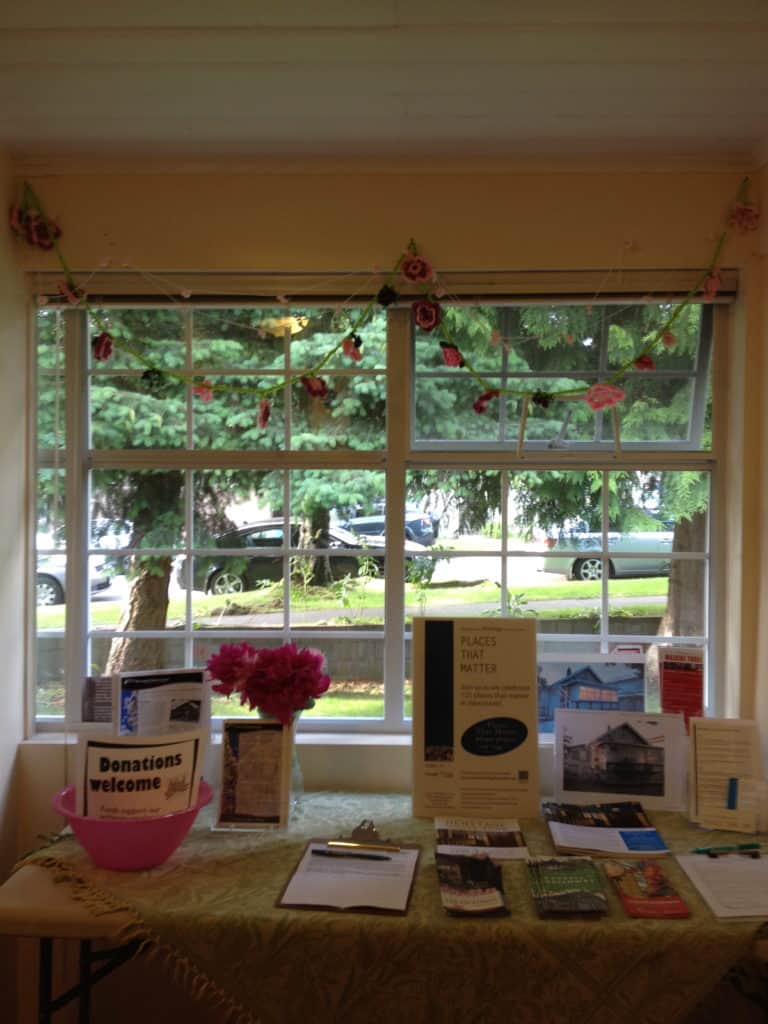 The plaque is installed on the house's stone fence

Joy and her brother Timothy at the house, c. 1938. Photo: Courtesy Joy Kogawa.

At the Historic Joy Kogawa House, listening to three authors: Christine Lowther, Sonja Larsen, Kate Braid, during an afternoon of readings from their memoirs: Red Star Tattoo, Journeywoman, and Born Out of This, November 2016. Photo credit: Jacqueline Carmichael.

Photo by Thekla of the plaque presentation 2012.