“There had arrived in Vancouver a queer-looking vehicle called an automobile. We had read about them in magazines. One day, the telephone rang. The call came from the Hastings Sawmill and the speaker asked me if we had any gasoline which could be used in automobiles." - Major J. S. Matthews

In 1907, a 13-gallon (59 L) kitchen hot-water tank, a length of rubber garden hose, a glass steam-gauge, an open-sided corrugated tin shed and a barroom chair were all that were needed for Charles Merle Rolston, local Manager of Imperial Oil to establish Vancouver (and Canada’s) first gas station. His Uncle J.C. Rollston, who was chosen to act as Attendant, was overheard to have said: “I’ve been busy this morning!” “How many?” “Three cars this morning!”

Sponsored by the Vintage Car Club of Canada, Vancouver and Antique Chapters.

Canada’s First Gas Station
Vancouver was home to the first gas station in the country when Imperial Oil opened up on the corner of Cambie and Smithe in June, 1907. According to Chuck Davis’ History of Metropolitan Vancouver, the first car to appear in Vancouver was a Stanley Steamer, in 1899. The first gasoline-powered car arrived in 1904.

The Method
In 1907, it occurred to employees at the Vancouver office of the Imperial Oil Co. that the usual method of fuelling automobiles at that time -namely, carrying a sloshing bucket full of gasoline up to the vehicle and pouring it through a funnel into the tank – was laborious and potentially dangerous. So Charles Rolston, manager of Imperial’s local office, built a small open-sided shed of corrugated iron next to the storage yard. Atop a tapering concrete pillar he placed a 13-gallon (59-litre) kitchen water tank fitted with a glass steam-gauge, with 1-gallon (4.5-litre) increments marked off by white dots. The tank was gravity fed, being connected to Imperial’s main storage tank. The filling hose was a 10-foot (3-metre) length of garden hose, which the attendant drained with thumb and finger after filling a car.

Major Matthews Recalls the Station’s Birth
The late city archivist J. S. Matthews (see Major Matthews’ House) was in his late 20s at the time and an employee of Imperial Oil. He recalled the birth of the station in a 1955 speech:

“There had arrived in Vancouver a queer-looking vehicle called an automobile. We had read about them in magazines. One day, the telephone rang. The call came from the Hastings Sawmill and the speaker asked me if we had any gasoline which could be used in automobiles. The office boy replied that we had three kinds: One was ‘74’-brand Baume gasoline and was supplied to drug stores, who sold it to ladies for cleaning their gloves; the second kind was deodorized stove gasoline, used in plumber’s firepots for heating soldering irons, and the third kind was benzine, used for dissolving lacquer in the salmon canneries along the Fraser to prevent the salmon cans from rusting. The office boy went to the warehouse and told the foreman to send a four-gallon can of ’74’ down to John Hendry, manager of the mill. That can was the first gasoline ever sold in British Columbia for motorcar use.”

The First Gas Station Attendant
The first attendant was Imperial’s former night watchman and Charles Rolston’s uncle, J. C. Rollston. Suffering from poor health, his co-workers believed he would improve in the sun and open air. They bought a bar room chair for him and set him down by the “pump.” Canada’s first gas station was now in business.  “Oftentimes as I passed and waved good morning, [Rollston] would call out. ‘I’ve been busy this morning!'” recalled Major Matthews. “‘How many?’ I would call and he would answer back, ‘Three cars this morning!'”

The Word Spreads
Eventually, more Vancouver drivers began purchasing their gasoline at the station; as many as 50-60 cars would be lined up on pre-holiday afternoons, prompting Rolston to add a second tank. The fame of the gas station soon spread beyond Vancouver. “A dealer in Florida wrote asking details,” says Matthews. 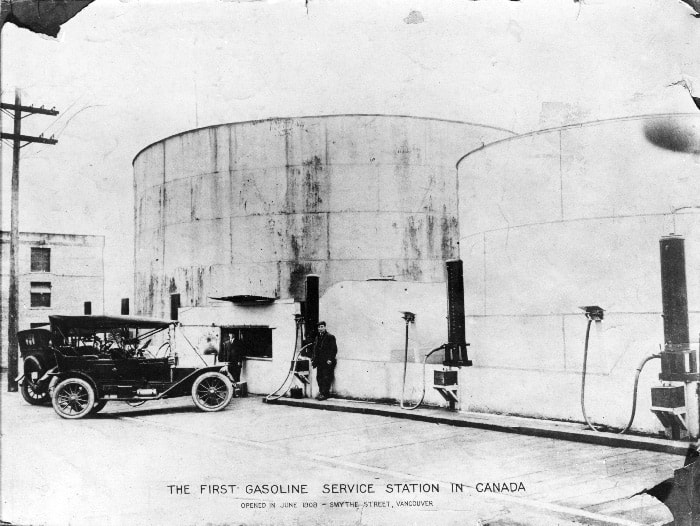 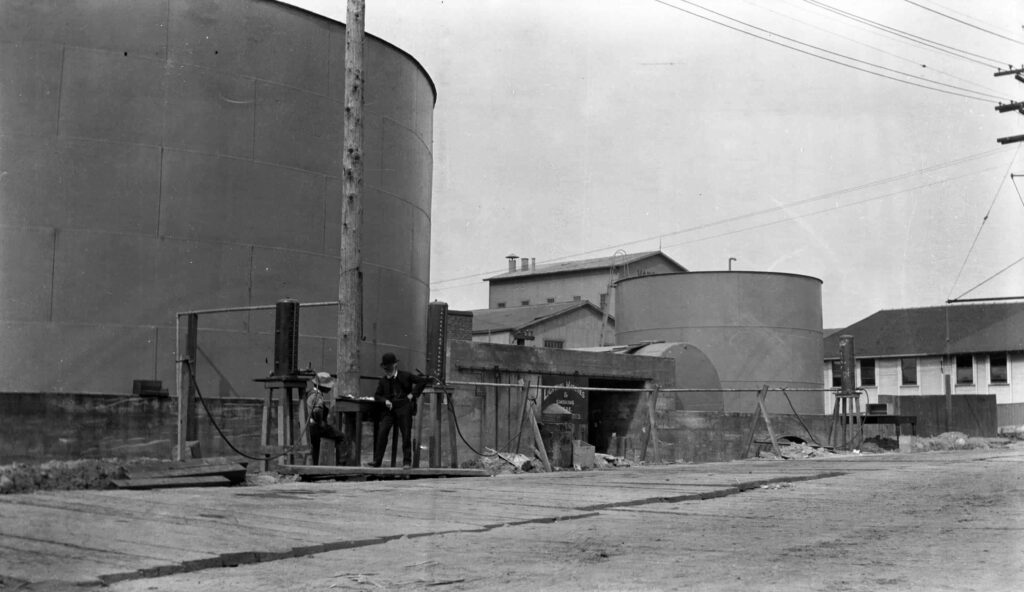 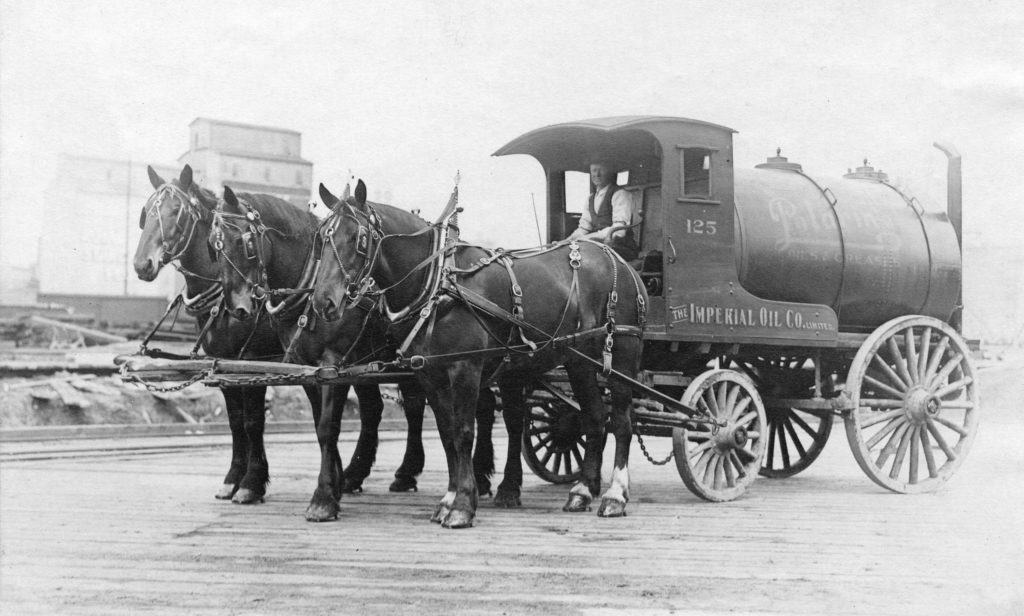 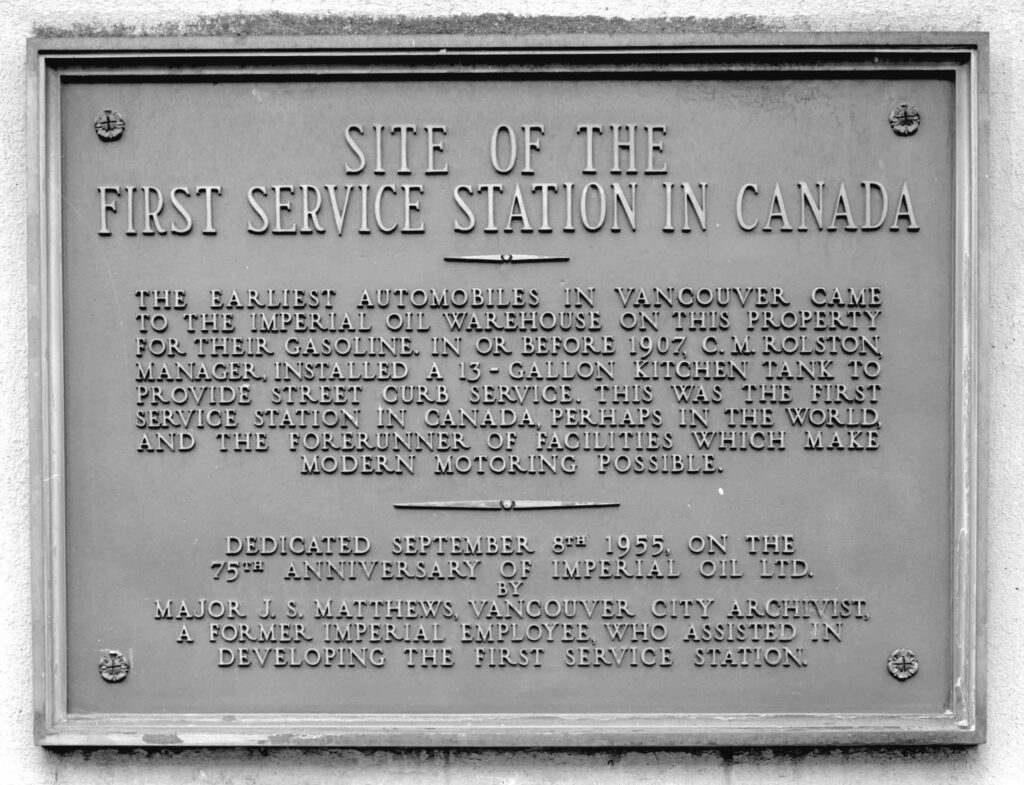 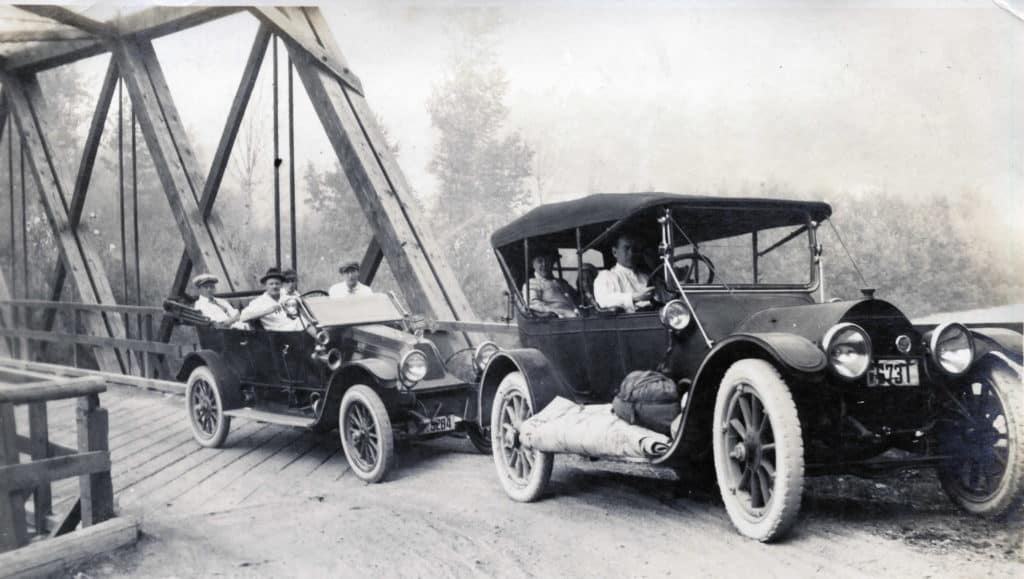 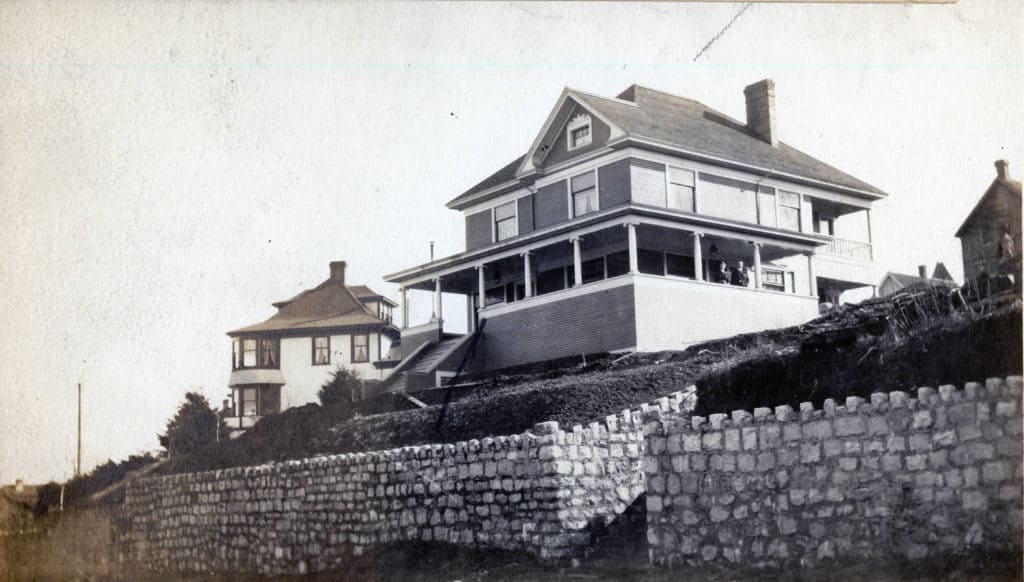 The Rolston homes (2 of 3 side-by-side) located at Oak and 7th in Vancouver. Photo courtesy of Laura Armstrong. 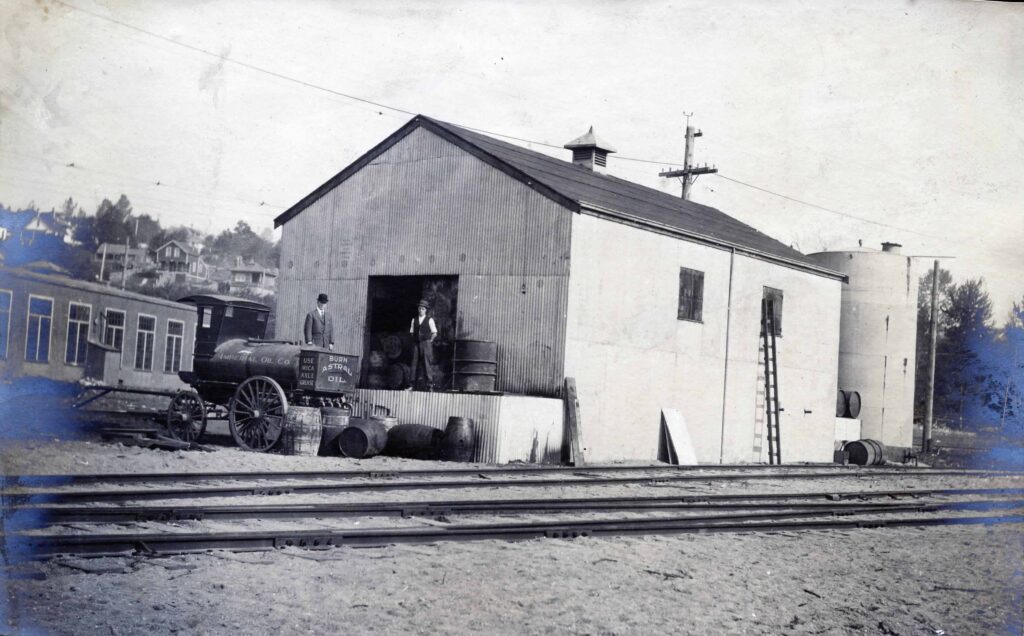 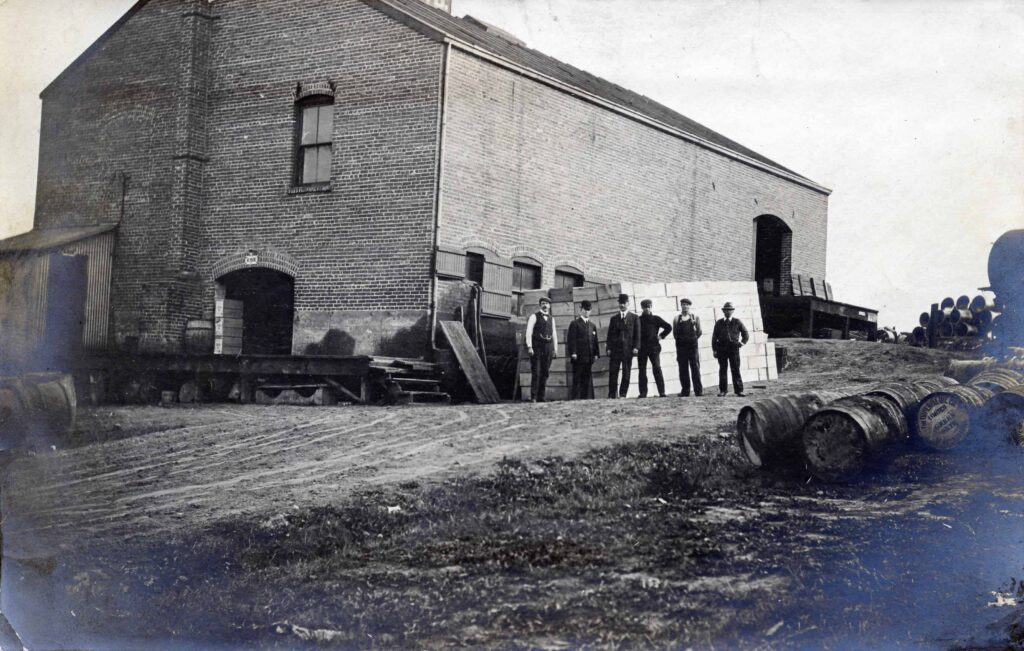 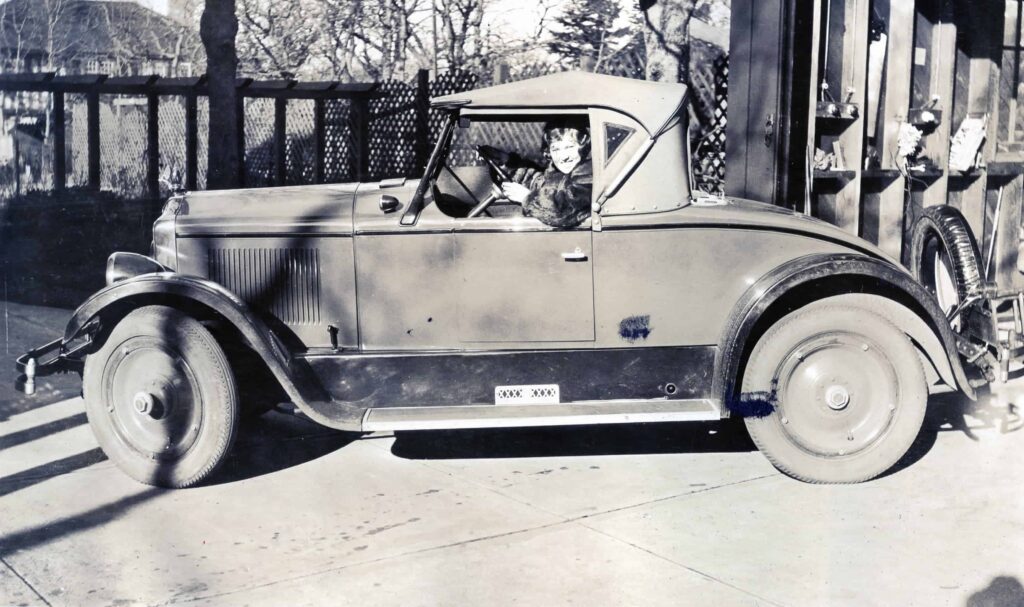 Charles Merle's (Chick) only daughter Merle behind the wheel of the family Packard convertible in 1929. Photo courtesy of Laura Armstrong.

The Rolston homes (2 of 3 side-by-side) located at Oak and 7th in Vancouver. Photo courtesy of Laura Armstrong.

Charles Merle's (Chick) only daughter Merle behind the wheel of the family Packard convertible in 1929. Photo courtesy of Laura Armstrong.