“For a tiny little city of just a few hundred or a thousand people, this was really the beginning of organized medical care in the city." - Michael Kluckner.

Vancouver’s first hospital facility was a tent destroyed during the great fire of 1886 which was replaced by a hastily erected 9-bed wooden structure. In 1888 the first City Hospital was built of brick on this corner lot between Pender, Beatty and Cambie Streets, on land acquired from the Canadian Pacific Railway.

The City Hospital grew to a 50-bed compound of brick buildings with open wooden balconies, surrounded by picket fences and gardens. It was replaced in 1906 with the newly built Vancouver General Hospital. The original buildings on this site were demolished in the 1940s.

Early Makeshift Medical Facilities
After Vancouver’s hospital tent was destroyed during the great fire of 1886, the CPR erected a nine-bed cottage to provide care to railway workers injured on the job. It stood on the railway tracks between Hawks and Heatley and was headed by the CPR’s physician J. M. Lefevre. In 1887, the city took responsibility for the hospital (which became known as City Hospital), and a health by-law introduced that year provided free medical and nursing care for the poor, either at home or in City Hospital.

First City Hospital
In 1888, when the city was two years old, the first city hospital was built at the southeast corner of Cambie and Pender across the street from Central School (now Vancouver Community College). The city’s new board of health constructed a compound of brick buildings with open wooden balconies, flower gardens and a picket fence on what was then the edge of downtown. The city’s courthouse stood on the block to the north, now Victory Square, which was the original centre of the city’s institutional life. Buildings included a men’s surgical ward, a maternity ward and crêche and, conveniently, the city morgue facing Beatty Street. The operating room had electric lights and steam heat for sterilizing dressings and instruments. The upstairs ward was for female patients, the downstairs ward for males. With just 50 beds, it had become overcrowded by the turn of the 20th century. Citizens petitioned for a new hospital, leading to the construction of Vancouver General in Fairview. The new Vancouver General Hospital opened in January 1906 on Tenth and Heather Street and 47 patients were transferred there from the old downtown building.

New Uses
Nevertheless, the old City Hospital buildings found new uses. The precursor to UBC (an outpost of McGill University) used them before moving to the Fairview “shacks” south of Vancouver General Hospital, and the destitute elderly were housed until Taylor Manor opened on Boundary Road in 1915. Subsequently, the Vancouver Social Services Department used it, most notoriously during the 1930s Depression when unemployed men lined up outside the old crêche to receive emergency food supplies distributed by Relief officer W.R. Bone, Esq. Typically a man received a 100-pound sack of potatoes and a cut of meat to carry home on his back.

The buildings were demolished in the 1940s; a parkade has occupied the site since 1970. 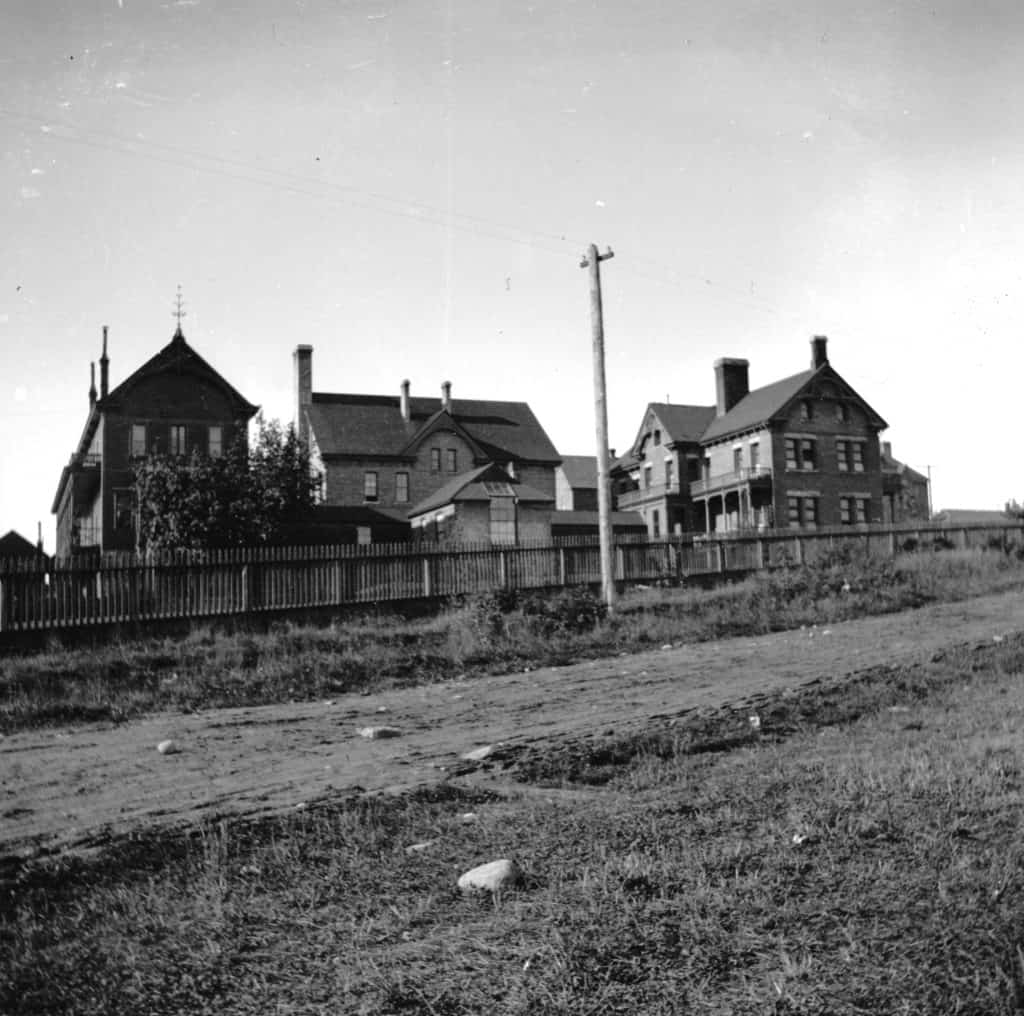 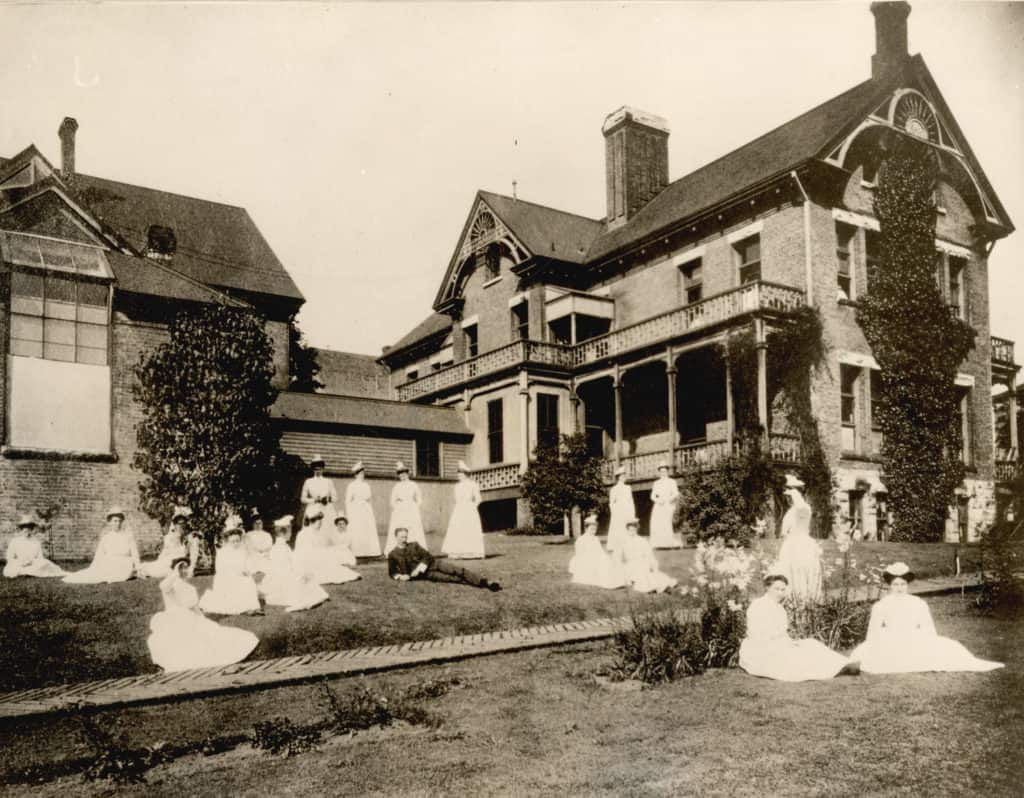 Men and nurses on lawn in front of the Vancouver City Hospital, 530 Cambie Street in 1902. City of Vancouver Archives, Bu P369. 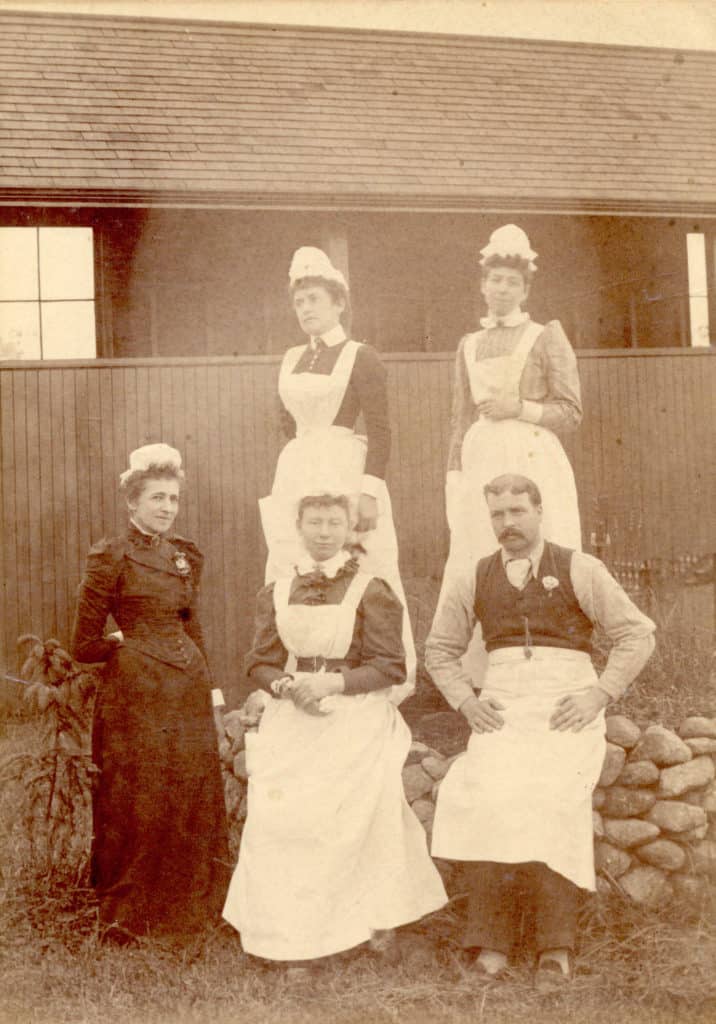 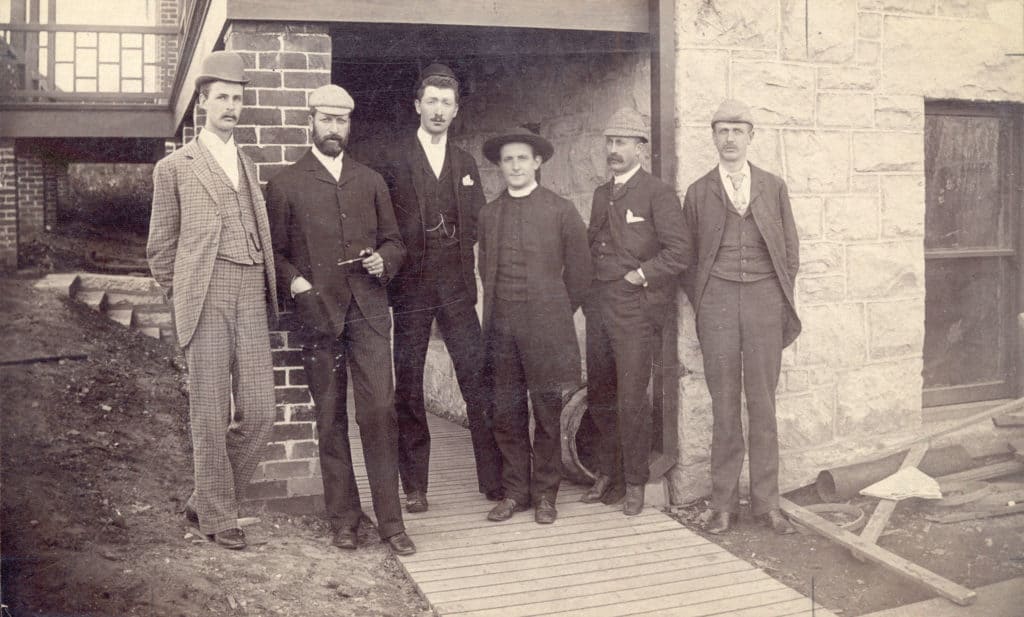 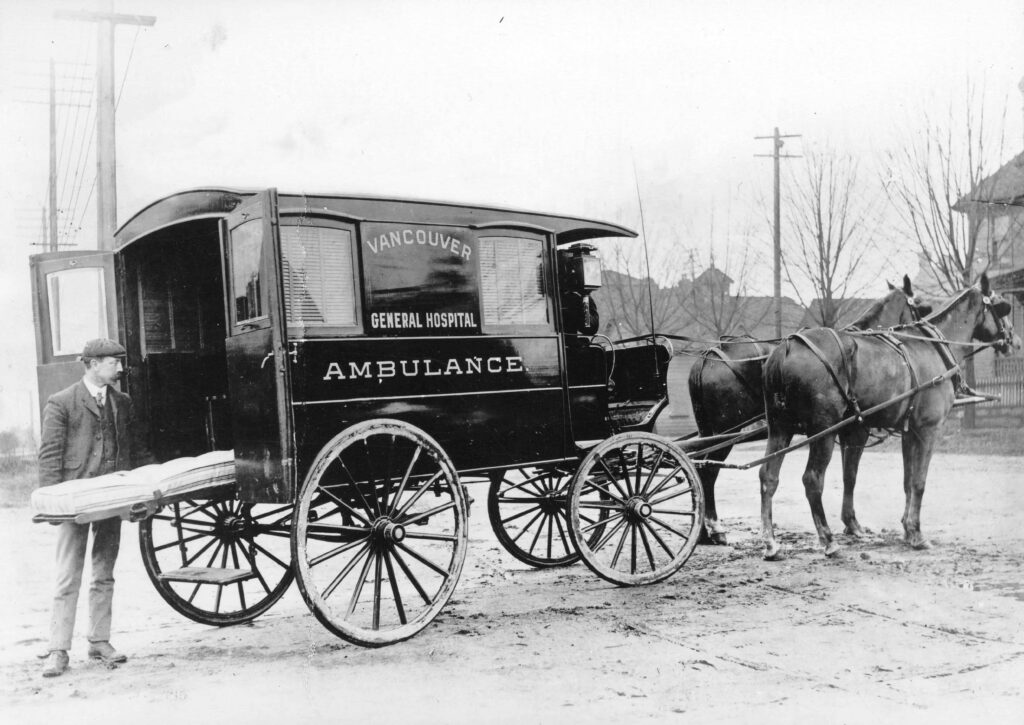 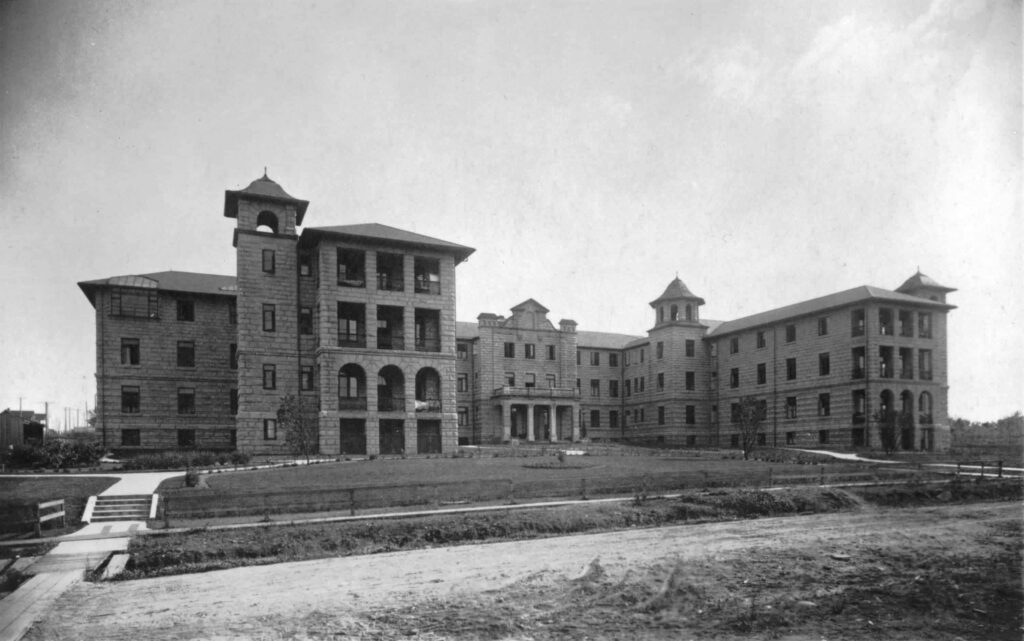 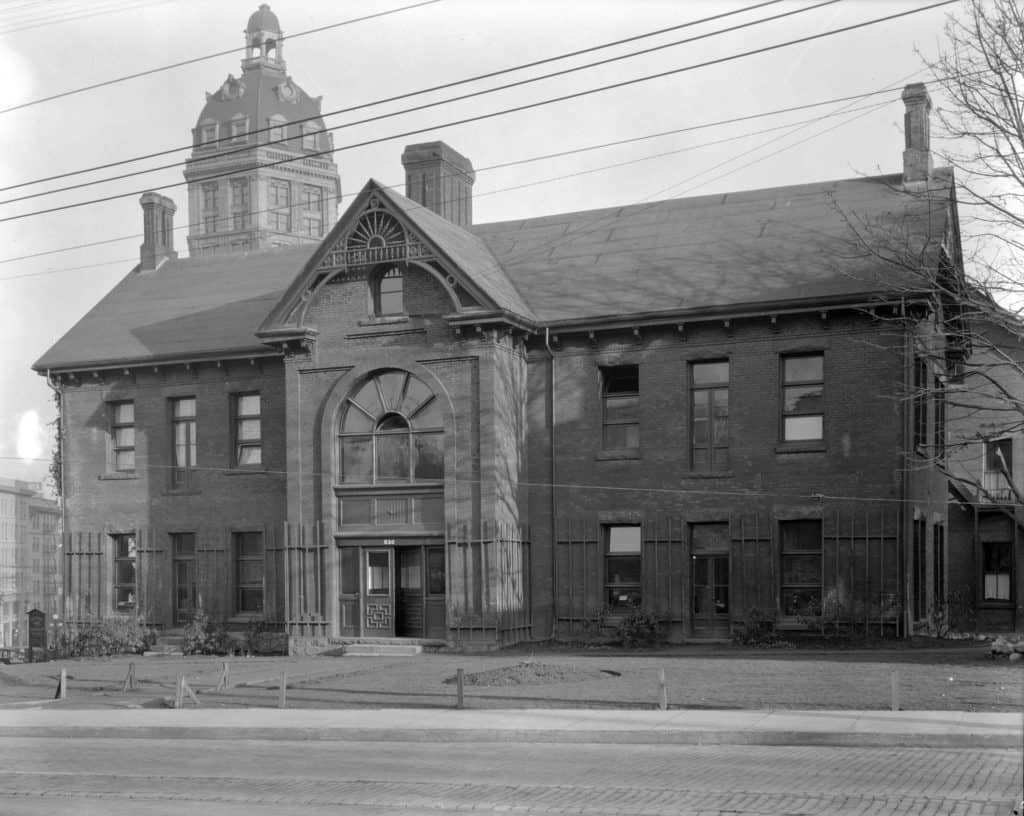 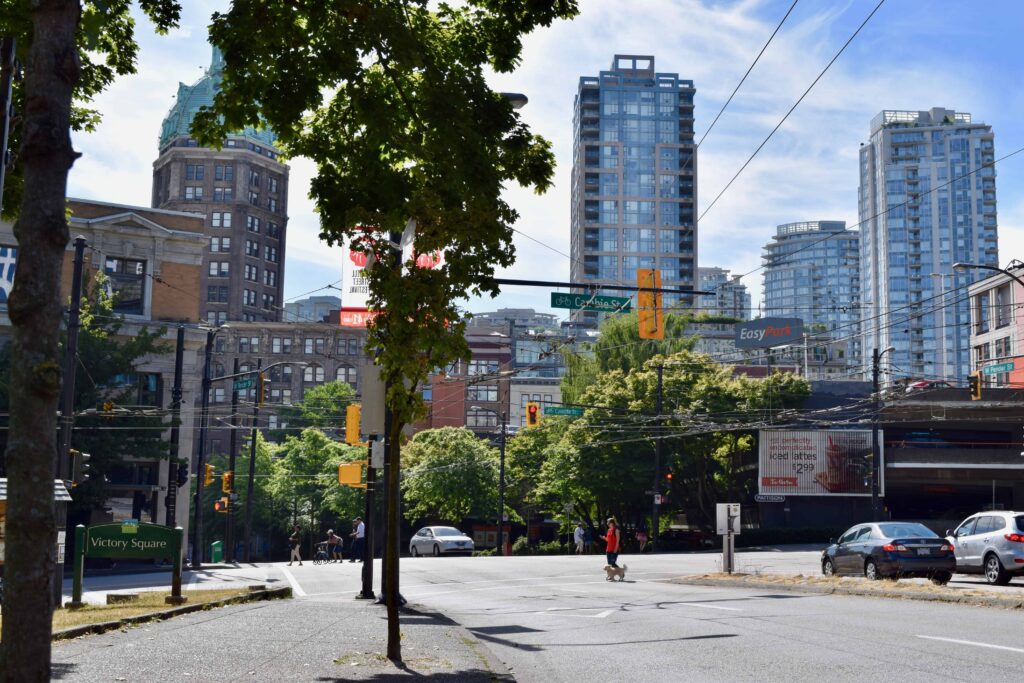 The site of the city's first hospital (corner of Pender, Beatty and Cambie) is now occupied by an EasyPark parkade.

Men and nurses on lawn in front of the Vancouver City Hospital, 530 Cambie Street in 1902. City of Vancouver Archives, Bu P369.

The site of the city's first hospital (corner of Pender, Beatty and Cambie) is now occupied by an EasyPark parkade.