Started by Sam Cohen in 1919, and now headed by his granddaughter Jacqui Cohen, Army and Navy has been a family-run business for nearly one hundred years. It was the first Canadian discount department store, and is the oldest surviving retailer in Gastown as well as one of the few remaining department stores in downtown Vancouver. Since 1948, the department store has been located in the Dunn-Miller Block, a heritage building with significance to the development of Gastown. The Army and Navy company and the building it occupies have historical and cultural significance to the Downtown Eastside and the store continues to be a hub for the diverse community. It was announced in 2020 that the Vancouver store, and the five locations in Canada, are closing.

Since 1948 Army and Navy has occupied the Dunn-Miller Block, at 8-36 W Cordova, buildings which have historic significance to the development of Gastown and are protected by municipal heritage designation.

Designed by architect Noble Stonestreet Hoffar for two leading businessmen (merchant and alderman Thomas Dunn and the city’s first constable and postmaster Jonathan Miller), the grand Victorian Italianate façade on Cordova Street is actually two separate buildings both known as the Dunn-Miller Block. Both were constructed in 1889, just three years after the Great Fire destroyed the town and at the time they symbolized the return of prosperity. Major Matthews noted the building as the largest and most pretentious building in Vancouver when it was built. The building is a brick façade with stone and classical detailing fronting a timber frame structure with cast iron supports. The 180 foot façade, with pediments topping the roof and vertical sash windows, is similar to Georgian England terraced buildings. The structures to the west were later built with similar height and setback, creating a unified façade on the block, which is rare for Vancouver. All of the architectural ornament is galvanized tin, a popular and affordable period method of adding detail, and the ground floor features cast iron storefronts.

Originally the Dunn-Miller Block housed Dunn’s Hardware at street level with tenants above. Early tenants included H. McDowell & Company druggists, Vancouver Reading Room, Vancouver Electric Railway and Light Company, the Caledonian Society, the Bricklayer’s Union, Knights of Pythias and a Jewish congregation. In the late 1890’s during the height of the Klondike gold rush, the building was purchased by Arthur Heywood Lonsdale, a property owner of North Vancouver, who added his name to the building. Since 1948, the building has been owned and occupied by Army and Navy.

Sam Cohen and the Army and Navy Department Store

Sam Cohen opened his first business in 1919 at the age of 22, selling goods, primarily army boots, at a rented storefront at 44 W Hastings. Two years later he opened Army and Navy, a store that was based off of buying distressed goods (bought from stores closing down) and army surplus. Cohen’s philosophy was to sell his products at affordable prices and the store was constantly offering new product.

Army and Navy was Canada’s first discount department store chain. Sam opened a second store in 1920 in Regina, and others in Edmonton (1928), Moose Jaw (1933), New Westminster (1939). In the 50s and 60s, stores in Edmonton and Regina were renovated and expanded. Army and Navy also operated a mail-order catalogue from 1925-1986, making it one of the longest running department store catalogues in Canada. The catalogue had a variety of products for sale including clothes, shoes, household goods, hunting and fishing supplies, hardware and toys.

Army and Navy Under New Leadership

After Sam’s death in 1966, the company was taken over by Garth Kennedy, who was the president until 1998, with Sam’s son Jack serving as vice-president. During these years Army and Navy opened stores in Saskatoon, New Westminster and Calgary, and the Dunn-Miller Block location was partially remodelled and restored. Jacqui owns much of the block, and has spoken in the past about redevelopment with residential and commercial spaces, while retaining an Army and Navy store at the location, but for now there are no immediate redevelopment plans for the block.

Sam’s granddaughter Jacqui Cohen became president and CEO of Army and Navy in 1998. Jacqui made some changes shortly after taking over, including rebranding and changing the focus to discounted brand name merchandise, closing the Saskatchewan stores and opening one in Langley. In addition to their original store on Cordova, it had locations in New Westminster, Langley, Calgary and Edmonton.

On May 9th 2020, Jacqui announced the permanent closure of the family-run business. Read the Vancouver Sun article  (video included). The global pandemic of 2020 has seen the closure of many local businesses, and was cited as one of the reasons for closing the business after 101 years.

Cultural Significance of Army and Navy

Army and Navy is one of the last remaining, and longest running departments stores in downtown Vancouver and is the oldest retailer in Gastown. Its legendary shoe sale, first held in 1949, was a yearly event. Since Army and Navy opened in 1919, Gastown and the Downtown Eastside have seen dramatic changes and are home to a socially diverse community. Jacqui is passionate about the issues and challenges facing the Downtown Eastside today and is involved in the community. She recognizes that many of the store’s customers are welfare recipients or on a fixed income and asserts that the store is, and always has been, for everyone in the neighbourhood. Jacqui preserved her grandfather’s legacy of a store that offers affordable goods and serves the community as a whole.

The Cohen family has long been involved in philanthropy, and Jacqui’s charity Face of the World Foundation, raises money for organizations that support battered women, abused children, the elderly and the homeless. Jacqui’s daughter Kasondra started Face of Today, which helps provide opportunity to underprivileged aspiring leaders and youth driven charities.

Significance to the Jewish Community

The Dunn-Miller Block and Army and Navy have historic significance to the Vancouver Jewish community. Jewish people have been living in Vancouver since the beginning of the city’s settlement, with their community centered in the nearby Strathcona area and later moving to the False Creek and Oak Street areas in the 1940s. The first public Yom Kippur services in Vancouver were held in a hall rented from the Knights of Pythias in the Dunn-Miller Block in 1892, and in 1893 the first Jewish congregation met in the building.

The first synagogue in Vancouver was not built until 1912, and the first community centre in 1928. From 1910-1930, the number of Jewish families in the city grew from 200 to 600. Sam Cohen made significant contributions to the community, including providing jobs at Army and Navy to new Jewish immigrants. Sam’s daughter-in-law Marlene (Jacqui’s mother) has also been actively involved local Jewish organizations and charities since the 1950s. 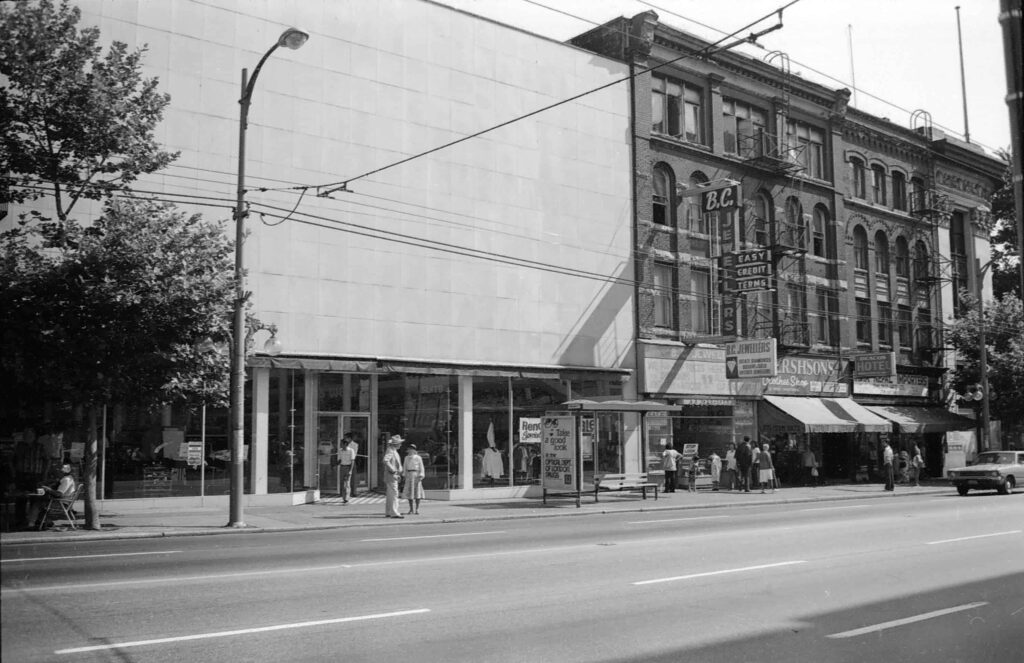 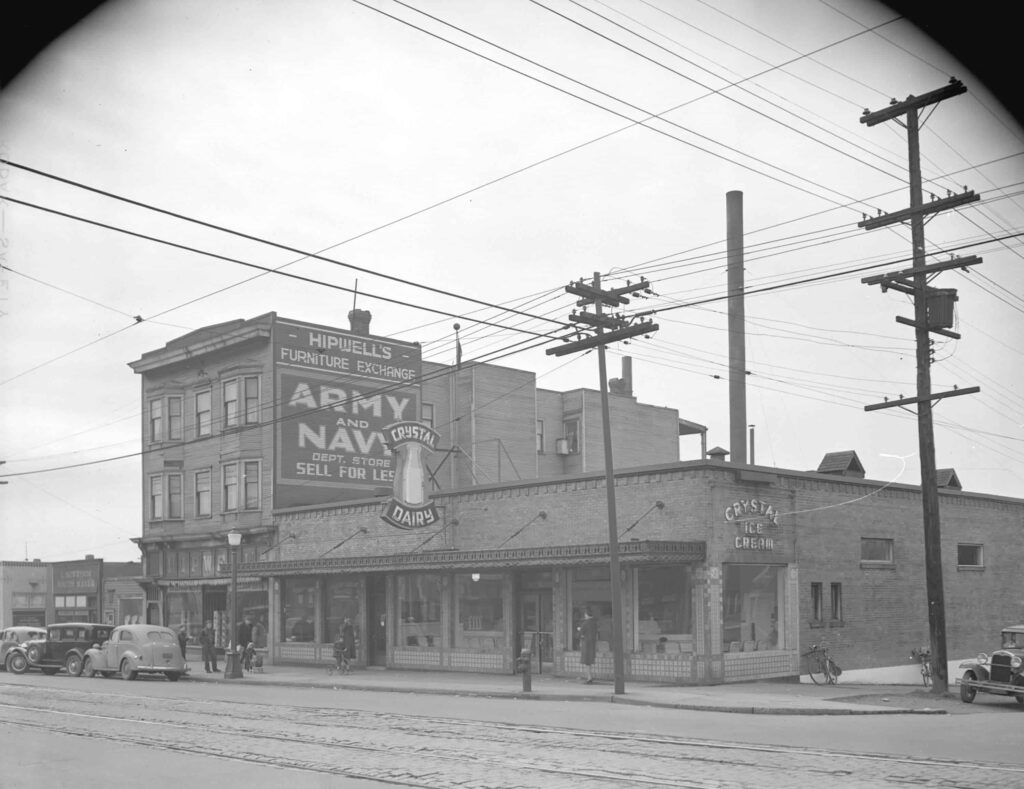 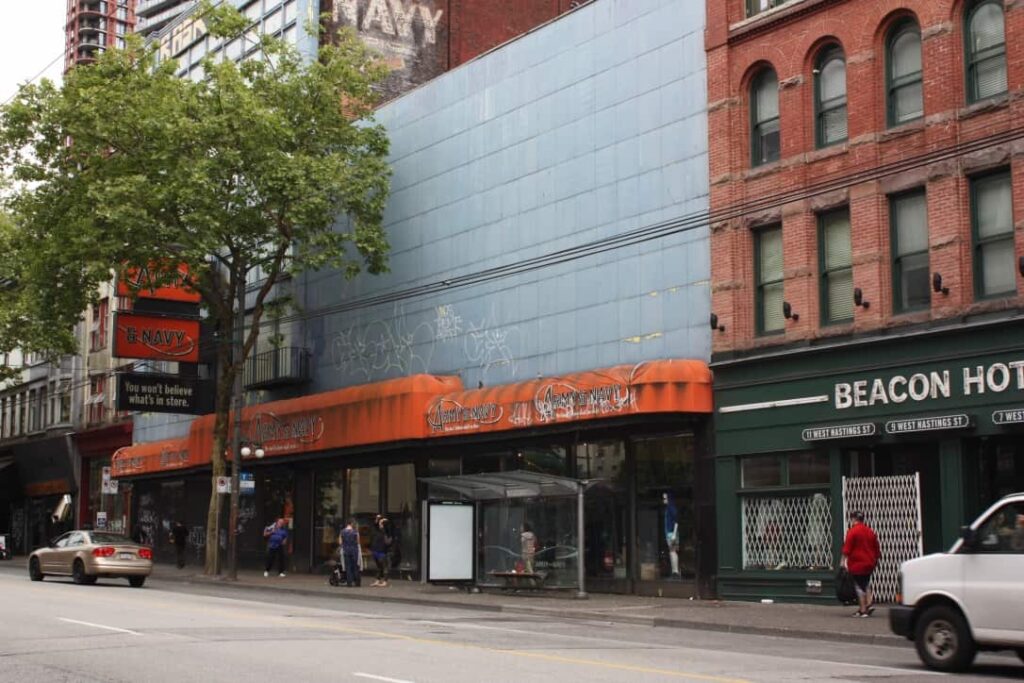 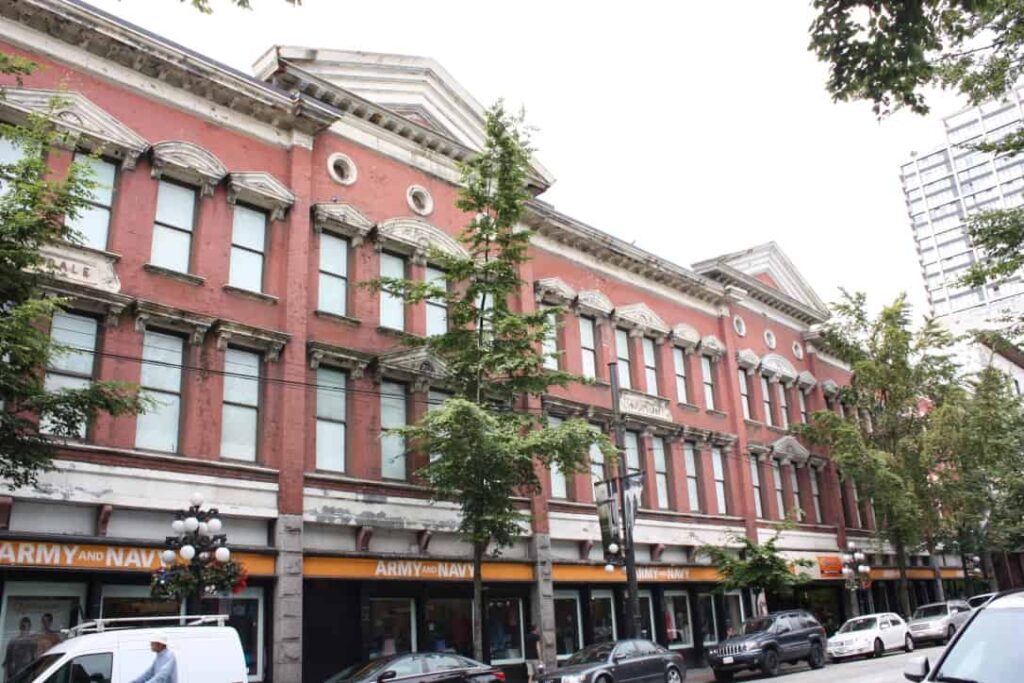 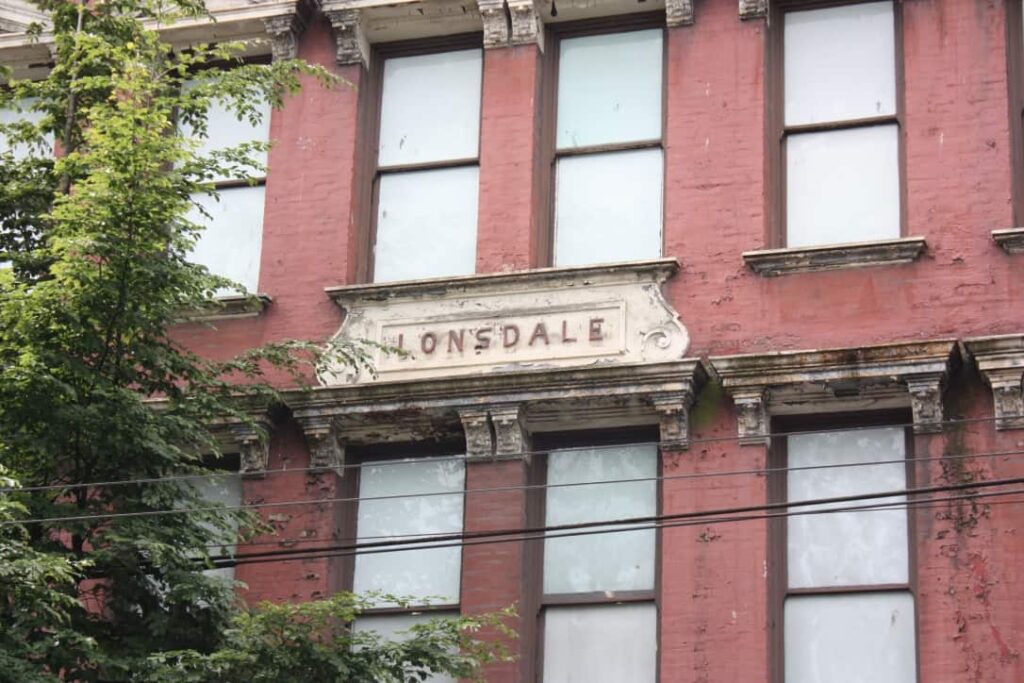 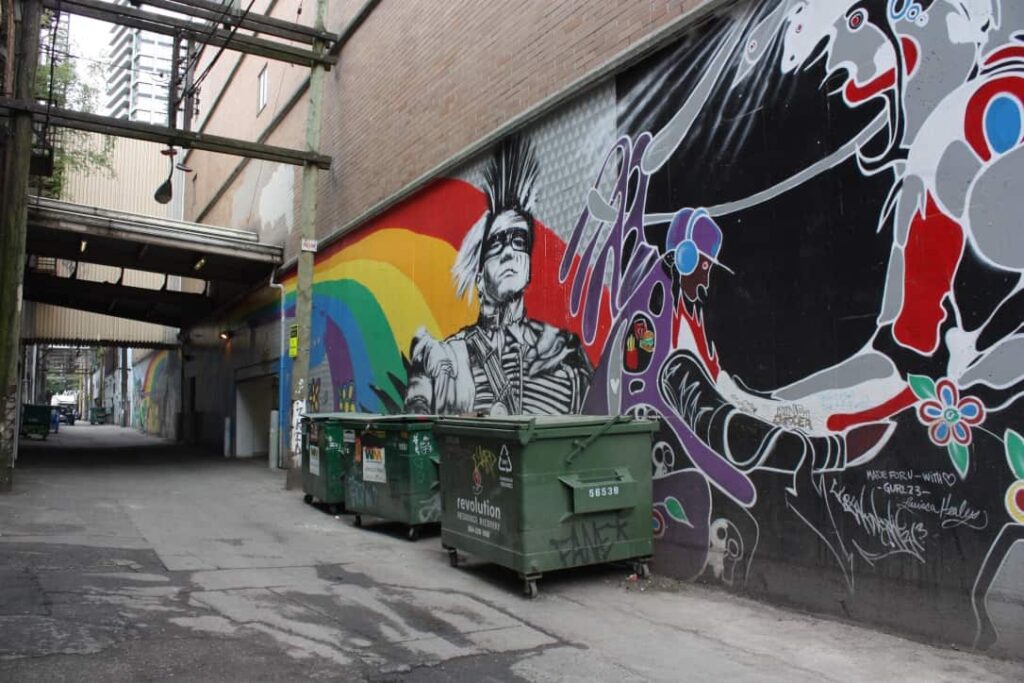 Mural in alley between Army and Navy buildings. VHF, 2018.

I believe I wore shoes from Army and Navy from four years old until High School Graduation in 1959. Shopping there was the highlight of going “downtown “ with my Mother.

Mural in alley between Army and Navy buildings. VHF, 2018.